A word on the age of the Ocean siblings 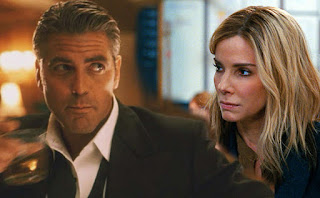 I hate to say this, but I couldn’t help noticing in Sandra Bullock’s first scene of Ocean’s Eight how obvious it is that she’s had plastic surgery. It seems that many if not most actresses do it, so I shouldn’t be surprised. If it prolongs their “prime” – defined here as that period when they can still get cast in roles with big paydays – then it’s a worthwhile investment, I’m sure. But I guess I thought my Sandy would be willing to grow old gracefully.

Anyway, the point of this observation is not to body shame. (And to be fair, I never noticed it again the way I noticed it in her first scene, during her parole hearing.) It’s to note the incongruity between the age Bullock is trying to play, and the age her character must really be.

As you probably know, Bullock plays Debbie Ocean, the sister of Danny Ocean from the original Ocean’s trilogy. (Or, I should say, the trilogy that grew out of the remake of the original original movie, starring the rat pack.) We wouldn’t necessarily know how old Danny Ocean is, or was, if it weren’t for the fact that he is now a “was.” One of the first things we learn in Ocean’s Eight is that Danny Ocean is pushing up the daisies. Or rather, he’s entombed in one of those marble walls in a mausoleum, the dates of his birth and death engraved on the front. Anyway, he’s dead.

I’ll get back to the issue of Danny Ocean being dead later.

His age is the thing that interests me now, and not only because it contains a funny continuity error that was likely the result of reshoots. That continuity error is that his death year is alternately listed as 2017 and 2018 in this early scene in the mausoleum. When we see it in close up, it’s 2018, but there’s at least one background shot where it’s listed as 2017. I suspect maybe at one point this movie was supposed to come out last year, and they didn’t realize they still had the old death year listed in some of the shots. (Side note: Who cares if he died this year or a year ago? Does a 2017 death year make the film seem somehow less of-the-moment?)

What interests me here is the birth year, which was the same in both shots: 1958. Interestingly, this is NOT the birth year of George Clooney, who played Danny Ocean, and is a few years younger than arguably his most famous role, having been born in 1961 himself. Anyway, the 1958 birth year means Danny was anywhere from 58 to 60 when he died, depending on which death year you’re looking at.

So Debbie Ocean is supposed to be …

The movie goes to great pains to suggest she’s still in her 40s, and possibly even her early 40s if you wanted to follow Bullock’s plastic surgery to the logical conclusions of what it is trying to accomplish. Bullock is actually 53, so she’d be only five to seven years younger than her brother if we were going with the actual age of the actress. But this movie wants her to be 47 at the oldest, I imagine, which makes her a full decade younger than her brother, and not the contemporary the film sort of asserts that she is.

This is a really minor point upon which to expend 700 words.

Okay, so let’s get back to Danny Ocean being dead. And now I should probably include a second SPOILER WARNING because I’m going to spoil something that doesn’t come until the very end of the movie, though doesn’t ultimately have a whit to do with this actual story.

Such a big deal is being made of Danny being dead – like, it gets mentioned approximately every seven minutes of screen time – that the only conclusion seems to be that it’s setting us up for the same kind of long con that the movie’s narrative itself is about. You only mention Danny Ocean being dead this often if it turns out he’s not actually dead. Faking his death would be a very Danny Ocean thing to do.

Yet he is actually dead. Or, the movie never tells us he isn’t.

The film’s last scene involves Bullock returning to that mausoleum and pouring a martini to toast Danny’s memory. There was no way that scene was not going to include George Clooney strolling in as a surprise guest. No way for anything but that to happen.

And yet the credits do roll and he does not appear. I stayed around for the entire credits expecting a Marvel-style stinger in which Clooney shows up and winks at us, suggesting the possibility of an Ocean’s Fourteen or at least that he might appear in Ocean’s Nine, assuming this film is successful enough to warrant an Ocean’s Nine. But again I was disappointed.

So why exactly was Danny Ocean dead? What did that do for the story except kind of bum us out?

The only thing I can think of is that George Clooney said “Please, I don’t want any rumors of Steven making another Ocean’s sequel, and to cut those off at the pass, I’d really like you to kill off Danny Ocean.” I can’t really see the logic in it – Hollywood is traditionally about leaving open the possibility of sequels except where it’s absolutely necessary not to – but it’s possible he did it.

Or it’s possible this is just the longest of long cons and that Danny being alive will be the big surprise in Ocean’s Nine.

However, if you take this film only on its own terms, the film decided to kill him off without having any real rationale for doing so, or any payoff. Yet still felt it was necessary to keep mentioning him throughout the narrative, to keep his ghost in the background. One would think that this movie would only need a mention of the character to get it shoved off in the right direction, then could just fly on its own. Why keep coming back to him?

I suspect there’s more to this story and that it will just be some kind of delayed reveal for the sequel, but it definitely gave me pause.
Posted by Derek Armstrong at 1:18 AM

I, too, was waiting on Clooney to appear from behind that wall at the end. I also wouldn't be surprised if he showed up in O9. However, it's the age of another character that REALLY bothered me. And the implied age of Debbie Ocean, as you've outlined, highlights the problem. That character is the insurance agent played by James Corden. Not sure how old Corden is but I'm pretty sure he's younger than Bullock. Maybe...MAYBE you can say his character is slightly older than Debbie. Slightly. The problem? We're told he busted her father twice and Danny once. Wrap your pen around that one.

Ha! I didn't notice that (or this comment until just now, not sure how I missed it). Corden is 39! So 14 years younger than Bullock. Maybe he is the Doogie Howser of insurance investigators.