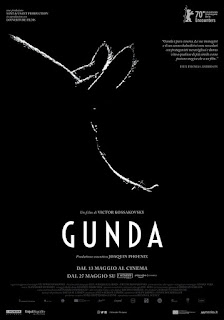 Since the end of my year watching classic documentaries last year for my monthly Audient Authentic series, I've dropped watching them like a bad habit.

I watched a couple in the waning days of finalizing my 2020 year-end rankings, but since I closed off that list and returning to "normal" viewing? Only three, and one of them (Bloody Nose, Empty Pockets) is not really a documentary as such. (For the record, the other two were They Shall Not Grow Old and Free Solo.)

Narrative films have always been my preference. See past discussions on my concepts like "the documentary ceiling," though that is not nearly the only post I've written where I've struggled with a waning desire to watch non-fiction films. In fact, looking over the "documentaries" tag on my blog, I seem to write a post bemoaning my on-again off-again relationship with documentaries at least once every two years.

But as you know, a great documentary can still transport you like a great narrative film does, and just because I got burned out on documentaries while vetting films for a film festival a few years back, it doesn't mean I can/should just forsake them.

So just as I launched Audient Authentic to goose my doco viewing at the start of 2020, now I'm determined to watch two documentaries a month on alternate Tuesdays, starting with the first Tuesday in August.

It's not a series -- I don't plan to write about them here, or only if something else about watching one of these movies inspires me to write. Rather, it's just a personal mandate that I hope to continue following in perpetuity.

I considered Monday night originally as an ideal night for this, but during the baseball season, Monday is problematic. I sometimes wake up early (like 3 a.m.) on Monday morning to watch the end of the baseball week as my weekly fantasy baseball matchup is being decided, so Monday nights often find me very sleepy. Tuesday it is.

Being comparatively less sleepy -- though I did also wake up around 5:30 on Tuesday morning -- was no help with Gunda, the first film in this mandate/non-series. This is one of the more visually beautiful films I've seen in a while, with its glorious black-and-white and its perfect lighting, the farm animals (mostly pigs) silhouetted by a fuzzy glow of sunlight.

But it is, literally, 90 minutes of watching pigs walk around. That's it.

And while everything on the screen is amazing to look at -- those piglets are cute AF -- a total absence of any human voice or real narrative is the kind of thing that puts you in a trance. I definitely paused at least twice, maybe it was three times, for a short nap, and in looking back on my viewing, it feels like I was in a kind of fugue state. Only this time I was not inspired to distract myself with other diversions, as I was when I watched Sweetgrass and wrote this post. I did, in the end, find it profound, and certainly not like what one thinks of as a "documentary" in most cases. (Sidebar: If it was filmed at farms in three different countries, as the end credits state, and yet the suggestion is that it is following the same pig as she and her piglets age, is it really a documentary? Are these not multiple pigs playing the role of one pig?)

Three other things I should tell you:

1) I may still watch documentaries on other days of the week. But most likely I will watch them on Tuesday.

2) If I miss an alternate Tuesday, which could happen for any number of reasons (like being on vacation), I will not watch my documentary on Wednesday. I will just skip ahead to the next available Tuesday, even if it resets the bi-weekly schedule to the second and fourth Tuesdays of the month rather than the first and third. (And this will get off schedule anyway as some months have five Tuesdays.)

3) I did already try this once before, as you can see in this post. It was ten years ago, and it was Mondays then, not Tuesdays. I don't remember how long we did it, but since it was a joint project with my wife, she might have pulled the plug on it if I didn't. Also I characterized it as a "summer series" in that blog, so maybe it just ran its course naturally.

I say I'll continue this one in perpetuity, but we probably know I won't still be watching a documentary every second Tuesday when I'm 70. But I'm gonna -- I mean, I'm Gunda -- do it in the short run, and let's just see how long it lasts.

Posted by Derek Armstrong at 4:03 PM