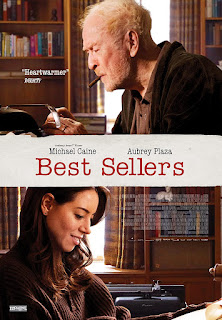 It's worth writing about here for a number of small reasons. When taken in combination, they justify my time to write it and your time to read it.

1) It's the type of movie you rarely see anymore, a small independent movie about book publishing starring two compelling actors and a good supporting cast. Or if they do make it, it's not for distribution in cinemas, where it has debuted in Australia -- both in smaller arthouse theaters and in multiplexes.

2) Michael Caine is 88 years old. It crept up on us but now it's here. Ninety is just around the corner. We should enjoy him now while we can.

3) It occurred to me that in watching this movie and writing about it, I'm doing something similar to what Caine's character is supposed to be doing in the movie: delivering on an advance. Caine's Harris Shaw was given $25,000 to write a book three decades earlier, and when her publishing house is in desperate financial straits, Plaza's Lucy Stanbridge comes to guilt Shaw into fulfilling his end of the contract. My situation is pretty different, but it also involves living up to my end of a deal. I saw this as an advanced screener provided by one of the publicists, and in writing the review, I'm complying with the conditions of the advance provided to me in the currency of free movies.

4) Best Sellers is also a personal milestone. It's the 400th movie I've reviewed for ReelGood, a list I have been painstakingly keeping on this post written in June of 2017. That was when I crossed 100 and I've just been continuing to update it since then, as a one-stop shop for links to all my reviews, should someone ask me for that.

Anyway, if you want my full thoughts, here is the review.

Posted by Derek Armstrong at 7:18 AM