Netflix has taken over the train station near my office 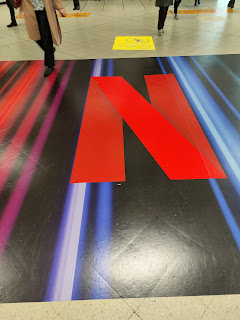 When I got off the train this morning for work I noticed something different.

At first I thought it was some sort of new interior design choice. The metal slopes between the escalators had this color bar pattern against a black background, which I thought was a bit loud, but I shrugged and decided it was some person's idea of modern design.

Then I noticed that there was an N at the bottom, and that N looked sort of ... familiar.

It was only then that I looked up and noticed that the escalator walls were festooned with advertisements for new Netflix content.

I mean, totally chockablock. No room for any other advertising. Netflix decided it wanted to be the sole purveyor of sales pitches in the whole Parliament Station in downtown Melbourne. And possibly at other downtown stations as well.

I didn't start taking pictures early enough to show you the breadth of this, but the breadth was total. And I will say, in Netflix's defense, that I did become aware of some projects I hadn't known about -- even if they already do a pretty good job advertising future content on the site.

I did start taking pictures by the time I got to the top of the two sets of escalators, at the giant square emblem you see above.

As I continued down the hallway toward the exit to the open air, the posters continued, as well as more banners on the floor, as you see here: 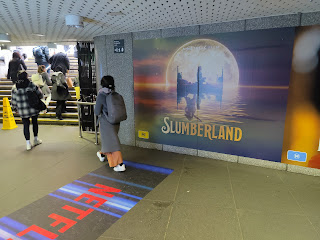 It's sort of the equivalent of when a website is absolutely crippled by the wall-to-wall advertising for a particular company, so much so that it actually shrinks the available real estate for the site's normal content. Which, unfortunately for that blitzkrieg approach, is never a good thing.

And so I say that the wholesale takeover of Parliament Station by Netflix is not a good thing either. I'll be curious to see how long it lasts.

If it lasts for only a short time, then it might be defensible as a short-term promotional stunt in association with some specific Netflix milestone or important date. Then again, if that were the case, it would seem that one particular program would be the focus, not a kaleidoscope of new Netflix content. Also that would be a pretty expensive promotional stunt.

Plus if it does go down after only a week, most of us won't assume it's because the window of time of the promotional stunt is over. Most of us would assume it was Netflix retracting in defeat after a resounding rejection of its campaign.

Me, I'm pretty loyal to Netflix, generally speaking, so this does not impact me one way or another. If I need something new to review for ReelGood -- as I did yesterday when I reviewed Lou -- I'll still look to see what new film Netflix has before I'll look at any of my other streamers. It's still the granddaddy.

Posted by Derek Armstrong at 9:11 AM