A Stupid use of commas 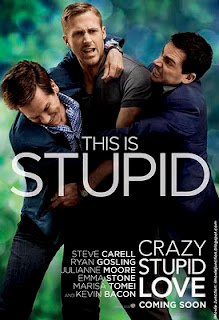 I hear Crazy Stupid Love is pretty, possibly very, good. At least two critics I respect have praised it in the highest possible terms.

Good for it. I had my doubts, I must say. I distrust Steve Carell at the movies, and I was actually at one point going to write a speculatively disparaging post about this movie called "Ryan Gosling sells out." But since few of my regular readers will allow me to make such blind indictments of an actor's role choices -- and probably for good reason -- I decided not to damn the movie without giving it a chance.

However, today I want to damn something that's not related to its actual quality.

Given that commas tend to confuse people, particularly in a title, why include them here, especially when the grammar is not even correct?

In order to understand my argument, we have to parse the meaning of the title. At its most obvious level, the title is talking about love with two modifier words: "crazy" and "stupid." The two adjectives may separately modify the word "love," or one may modify the other, as in "That's crazy stupid." ("Crazy" is loosely translated as "really" in the latter example.)

In no context does Crazy, Stupid, Love make sense. Unless you are just listing three things, two of which are adjectives and one of which is a noun. Which in itself does not have any overt meaning.

I'll grant you that the effective advertising campaign does lend some credence to the "listing three things" argument. As you see, the poster above says "This is stupid." Then there are these two below that concentrate on each of the other words in the title: 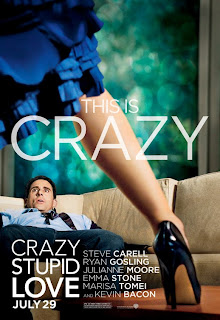 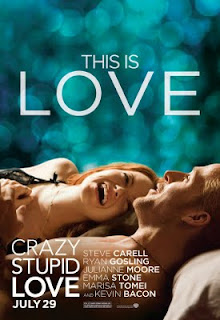 I'll also grant you that each of the three words can finish a sentence that starts with "This is." But that doesn't mean each is the same part of speech, or that those three sentences would be grammatically parsed the same way. "Crazy" and "stupid" are predicate adjectives, and "love" is a predicate nominative.

And then you might have a pretty good movie.
Posted by Derek Armstrong at 1:02 AM

Actually, you're supposed to separate two consecutive modifiers with a comma. Ergo, the title really ought to be Crazy, Stupid Love. I do appreciate your "crazy stupid" characterization, though. I don't get to explore such semantics all that often in a world that can't even get "your/you're" right half the time.

Thank God somebody else understands how to use commas properly, and that adjectives can modify each other as well as being individually in apposition to the one fucking noun.

If I see one more wanker saying something like:

then I do believe I will lose my mind.

Thanks for the comment S_S! (And to you as well Travis -- no idea how I failed to reply to this years ago.)

I must say, the comma after Yesterday in that example does not bother me terribly. I am always seeing examples of terrible comma use that drive me crazy, though. Here's one I saw recently. "Sitting on the stoop was a little, yellow box." That's adhering to what you perceive to be the rules way too closely. I was trying recently to describe to someone why you wouldn't include the comma there, and the best I could come up with was because both adjectives are essentially objective - there was no way to argue that the box was either little or yellow. Whereas if it were "Sitting on the stoop was a weird, unhappy box," you'd include the comma because both "weird" and "unhappy" are more subjective. What should my real argument have been to someone who doesn't get it?