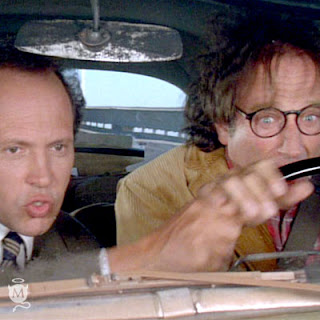 When blogger Mike Lippert of You Talking to Me? announced an interactive event on his blog this week called "Justify Your Shitty Taste," I knew I was in. One of my favorite things as a film lover is to defend movies I think people got wrong.

A film immediately jumped to mind: Repo! The Genetic Opera. Despite having some passionate cult fans, the film was generally lambasted, in part I'm sure because it features Paris Hilton. But my wife and I truly liked it -- a lot, actually -- and I thought it made a great candidate for Mike's project.

But then I decided I should really watch it again in preparation for writing the piece. As luck would have it, I own the movie on BluRay -- a friend gave it to me as what he thought was a joke. But the way my week's shaking out, I wouldn't have an opportunity to watch it until Saturday night, then write the post hurriedly on Sunday morning. Chances are Mike would like to be posting his results by then.

Then I remembered: I did a whole series on my blog last summer called Double Jeopardy, in which I re-watched films that I'd liked, but most other people didn't, to see if I still felt the same about them upon second viewing. I figured, Mike's probably not going to cry in his beer if the shitty tastes I choose to justify were first written on a previous occasion.

I had about ten movies to choose from in my series, but I chose Ivan Reitman's Fathers' Day because it was about the most universally reviled on the list. I figure, if I'm going to participate in Mike's project, I want to go all in.

So without any further blah blah blah, my first-ever re-post on The Audient. Enjoy. Or don't. It's up to you, really.

I've never seen the infamous flop Ishtar, but I have a very specific memory of reading a review when it first came out, back in 1987. I was 13 years old and probably just getting into reading film reviews, so this one stuck with me, as such formative experiences often do. I can't remember if it was the Boston Globe critic or someone like Roger Ebert, but it was a two-star capsule review which read, and I may be paraphrasing slightly:

So when I heard Ivan Reitman's Fathers' Day, which came out a decade later, described as Robin Williams' and Billy Crystal's Ishtar, I was as wary as everyone else who steered clear on the basis of that dour prognosis.

But when I actually did see it, sometime in probably 2001 or 2002, in order to provide the review for the website that employs me, I thought it wasn't half bad. In fact, better than that. I thought it was good.

In the years since then, I've been operating on the assumption that I must have been crazy. Like Bedazzled, which I wrote about in my first Double Jeopardy post, I've owned this movie for over five years, but had yet to re-watch it until yesterday. And like Bedazzled, I didn't actively seek out this movie as part of my collection. In fact, I came into possession of it at a theme party at a friend's house. Her idea was that you brought over crap that you wanted to get rid of, put it on a table, and walked away with someone else's unwanted crap. I can't remember what I purged at this party, but I came home with Fathers' Day. I'd liked it, after all. But I haven't watched it again, and this was so long ago, now, that I'm not even friends with that woman anymore -- haven't been for three or four years.

Well, I'm not crazy. And now I think I probably ought to go watch Ishtar, because if it's anything like this, Ishtar is probably not half bad, either.

The plot basically revolves around a 16-year-old boy who goes missing for two weeks after running away from his heartbroken parents (Nastassja Kinski and Bruce Greenwood). Desperate, Kinski's character visits two of her former lovers, Jack Lawrence (Crystal) and Dale Putley (Williams), who both bedded the woman right around the time her son was conceived. Either could be the father, and she uses this possibility to separately enlist their help in finding young Scott. (In retrospect, it seems like a precursor to Mamma Mia!, as there's actually a third possibility for the boy's male parentage -- Greenwood, who has thought he was the actual father the boy's whole life, and is involved in his own separate search for the boy.) As might be expected, Jack and Dale cross paths and discover each has been told he's the father of the boy. Hijinx ensue.

It's the nature of those hijinx that probably left some viewers and critics displeased. Williams is skittish and eccentric, and when we meet him, he actually has a gun barrel in his mouth, ready to off himself -- in a scene that's played for laughs. Crystal is, well, Crystal -- he's businesslike and sarcastic. Both could do these roles in their sleep, I'm sure, and they're meant to be a zany odd couple.

Well, it works. I'm not a huge Williams fan, and Dale Putley is normally the kind of role in which I like him least. But for some reason, I found him lovable and actually sort of believable here. I like the dynamic that builds up between he and Crystal, whom I've always enjoyed on screen. (And why did he quit acting, anyway?) It's not just a buddy comedy-type situation -- it's almost a bickering lovers-type situation, since Jack so clearly wears the pants in the relationship, and Dale plays the sensitive role that's traditionally ascribed to a woman. As they say in the movie, they really do make a good team in seeking out the wayward boy, and their attempts to navigate the rock 'n roll underground (Scott is following the band Sugar Ray, before they became sellouts) contain some funny fish-out-of-water stuff. (And if you know Sugar Ray only from that song "Fly" that was ubiquitous back in the late 1990s, see this movie -- it reminds you that they were once inaccessible punks, musically speaking.)

And it shouldn't be a huge surprise to us that it works. After all, the film is directed by the reliable Ivan Reitman, he of Ghostbusters and Dave fame. And it was written by Lowell Ganz and Babaloo Mandel, who also wrote Splash, City Slickers, A League of Their Own and Parenthood. Throw in producer Joel Silver, and you've got a dream team working on this film.

So why didn't people like it? Eh, who knows. Dale and Jack are likable, Scott gets swept up in a relatable predicament with his feelings for a girl (even if it involves a sort-of unrelatable theft from drug dealers), and even the notably serious actor Bruce Greenwood moonlights successfully into comedy, notably a scene where he gets pushed down a hill in a port-o-potty. If that just sounds silly, listen to Greenwood's hilarious line readings while he's trapped inside the overturned john: "Oh, it's horrible! Get me out of here!" Playing against type in the other direction is Julia Louis-Dreyfus as Jack's wife -- she's probably the most straight-faced person in the whole movie, and apparently, it didn't go over well, as she was nominated for a Razzie as worst supporting actress.

A couple other things to look for: an uncredited cameo by Mel Gibson as a guy with a face full of piercings, and the director's son, Jason, a future director himself, as "wrong kid in alley."

Double Jeopardy Verdict, Fathers' Day: It's not going to revolutionize the comedy world, but this is a nice little movie that didn't deserve to be bashed like it was. Fans of Williams and Crystal in particular should give it a shot. These two comedy icons give the fans what they came for, and isn't that one of the primary reasons people make movies?

Posted by Derek Armstrong at 12:24 AM