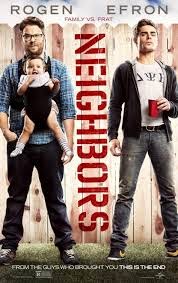 Rose Byrne's star is on the rise in Hollywood, in part because of her willingness to appear in a lot of Judd Apatow-type comedies. I think of her as a pretty sophisticated woman, so I always thought doing the lesser iterations of these movies (such as last year's The Internship) was a bit beneath her. Still, there's no doubt the decision has given her steady work.

She's still far from being a household name in the U.S., but things are a bit different in her home country of Australia.

In fact, Byrne is a focal point of the advertising for her new movie Neighbors, whose poster you see above.

Whose U.S. poster, I should say, you see above.

The Australian poster is different in a couple key ways:

The movie is called Bad Neighbours here. That's both an additional word at the beginning of the title, and an additional letter in the existing word.

Also, Byrne is in the poster. 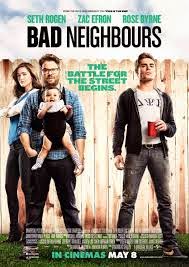 It's the first time since moving here that I've really been conscious of an attempt to push a local talent in a movie's advertising campaign. What I'm trying to figure out, though, is why.

Sure, Byrne is Australian, and sure, we live in Australia. But is it even her Australianness that's being sold here, or just Australia's ongoing and previously documented attempt to sell gross-out comedies to women? I don't know if Neighbors/Bad Neighbours is actually a gross-out comedy, but with Seth Rogen in the cast, I'm assuming there's at least an element of that present.

I first noticed this Australian initiative to appeal to women in another Zac Efron movie from 2014, which also had two titles: That Awkward Moment (in the U.S.) and Are We Officially Dating? (in Australia). If this sounds familiar, I wrote about it here.

So it mightn't matter that Byrne grew up in a suburb of Sydney. Her second X chromosome may be her more important characteristic in this case.

Oh, and why the movie's called Bad Neighbours here instead of just Neighbours? (We can't escape the presence of the additional U.) Because Neighbours by itself is the name of a long-running Australian soap opera, one that briefly employed the likes of Guy Pearce, Kylie Minogue, Natalie Imbruglia and Alan Dale.

I was hoping Byrne herself had cut her teeth on Neighbours, as that would bring my whole post full circle ... but synchronicity like that is only possible in the movies.
Posted by Derek Armstrong at 8:53 AM