A Python fan with questionable bonafides 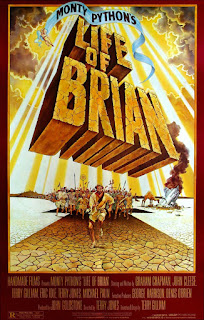 If you asked me to cite some of my most foundational comedic influences, they way predate The Simpsons and Seinfeld, or other touchstones that drove the senses of humor of Gen-Xers.

I should probably mention individual movies, since this is a movie blog, but it seems a single movie probably can't have as much influence over a whole worldview of comedy as can a TV series -- or a comedy troupe.

Both would be encompassed by something like Saturday Night Live, but with that ever-changing cast and group of writers, Saturday Night Live has been very inconsistent in quality over the years. And besides, I wasn't really watching it before I watched The Simpsons, anyway.

Also encompassing both a TV show and a comedy troupe is the real answer to this question, which is Monty Python.

About when I turned 13 I became obsessed with the famed six-person British comedy troupe that also let in one American, particularly their comedy albums, which I listened to on repeat on audio tape. In fact, I wore them out so much that I eventually memorized the entirety of the "constitutional peasant" scene from Monty Python and the Holy Grail, which I first encountered as a bit on one of these tapes, excerpted from the movie, before I even saw the movie. Around 1987 or 1988 I performed all three speaking parts by myself on stage for a talent show at our summer vacation spot, and I can still recite the entire scene from memory 34 years later.

Needless to say, when I finally saw Monty Python and the Holy Grail, probably around 1989, I laughed until my sides split. I still think of the scene where Arthur (Graham Chapman) lops the limbs from the determined knight, one by one, leaving the hobbled amputee no less feisty, it was the hardest I have ever laughed in my life.

You can probably guess which one that is, as I've already mentioned it. I would say I've seen Holy Grail six or seven times in total, always hoping I might laugh that hard again during the armless and legless knight scene, knowing in my heart of hearts that a single stimulus can only make you laugh that hard the first time you experience it.

I tried to watch The Meaning of Life a second time a couple years ago on one of my hotel movie marathons, but it was when my old computer's DVD player was crapping out and I couldn't properly play the disc. I haven't gotten back to it.

Friday night, I finally did complete a second viewing of Life of Brian. Actually, it took until Saturday morning, as my exhaustion after a seven-mile run prevented me from staying awake for the entire 93 minutes on my first attempt. (Only about half of that, actually.)

My wife was shocked to learn that I'd only watched it once. "Really?" she asked in disbelief. She didn't think I was lying to her, but she knows that I'm a huge Python fan. Her tone seemed to suggest that even people who did not consider themselves huge Python fans would have seen this more than once.

So why haven't I?

Well for starters, I didn't see Life of Brian for an additional ten years or more after I first saw Holy Grail. I can't say whether it was being 25 when I first saw it rather than 15 that made the difference. Does Monty Python appeal more to a 15-year-old than a 25-year-old? I wouldn't think so, though with some of the language in Brian, it's probably good I didn't see it when I was 15.

Maybe I was expecting a scene that killed me like the knight scene in Holy Grail, and just didn't get it. There are some really fun sequences in Brian -- like the scene where Eric Idle forces Brian to haggle over a fake beard, prompting him to lose money from the full price Brian was willing to pay -- but nothing that left me out of breath from the sheer absurdity of it. In fact -- and this could just be my worsening retention of content I've seen in movies -- I am already having trouble, just 24 hours after finishing it, remembering some of the scenes that gave me the biggest smiles.

And that's really what it is -- a lot of big smiles in Life of Brian, very few hearty guffaws. I always knew that I had liked The Life of Brian, but I was never driven to revisit it for the sheer pleasure of marinating in its comedic brilliance a second time.

The same was true of The Meaning of Life, only to a slightly lesser degree. Bits of that movie may be more memorable to me overall -- like the man who explodes upon eating the "wafer thin mint," which is actually something I refer to at least once a year in my regular life -- but it doesn't have the overall consistency of Brian. Still, I would have rewatched it before I rewatched Brian if my DVD player hadn't crapped out on me a couple years back.

I actually tried to make it a Python weekend by checking out The Meaning of Life on Saturday night, and then writing the post I'm writing now. However, it didn't join Brian in being available on Netflix (despite nearly every other Python project being available, including a live show from the past decade), so I just watched Happy Death Day 2U instead. (It might have been on one of our other services but I guess I just wasn't in a scouring mood.)

I can't leave a discussion of Monty Python's The Life of Brian without making a few more comments on things it does well. I haven't discussed the content almost at all, which is probably fine given that you yourself have probably seen the movie multiple times -- even if you're not a big Python fan.

The big win here is the consistency of its approach. This is a real narrative, something that the episodic Holy Grail doesn't totally land, even using the same characters throughout. There are plenty of good callbacks, and Python's strength at underscoring the absurdity of institutions is in full bloom here. In fact, it's such a moment in Holy Grail -- the aforementioned memorized constitutional peasant scene -- that helped establish the troupe as comedic icons for me. Zealots and the Bible are great fodder for that comedic worldview, and they tease them mercilessly.

Another thing Brian does better than Grail is its ending. Namely, it actually has one. "Always Look on the Bright Side of Life" is a much better way to end a movie than to have the main characters get taken away by anachronistic modern-day bobbies as the film itself breaks. The ending of Holy Grail still fills me with disappointment to this day.

I expected to be mildly annoyed during this scene after my experience reading Eric Idle's autobiography, which shares the title of the song, last year. I thought Idle came off as a bit full of himself in that book, despite all of his attempts not to and to be self-deprecating -- it came across in all of his name dropping, as the guy appears to have been best friends with everyone from George Harrison to David Bowie to Robin Williams. Ultimately I became a little annoyed by how evidently proud he was of having written the song, and even in a relatively short book I felt that there was a little too much discussion of himself that was modest in name only. But in the end, the scene worked for me just like it had the first time.

Now that I've done this, a second reckoning with The Meaning of Life is definitely in the offing. Maybe then I will finally have the authority to fully own the Python fandom I've claimed for some 35 years.

Posted by Derek Armstrong at 10:07 AM