All's Well That Ends Welles: The Lady from Shanghai 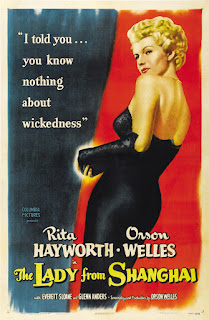 Well that series title is a bit of a mouthful, isn't it?

That's the first chance I've gotten to see it in print, and especially when the title of the film in question is pretty long itself, it's a bit awkward. But I can't rightly change it up now, because ... well, I don't know, I just can't.

This is indeed the first in a bi-monthly series devoted to watching the rest of Orson Welles' films that I have not yet seen, which is more than six so at some point we'll have to double up. But not in this first month, as I watch Welles' fourth feature overall, and the oldest I haven't yet seen.

But here's two little bits of information that will give you some idea how difficult this series will be. On IMDB Welles has 62 directing credits. Now clearly, some of those are shorts and some of them are TV, and some are probably something else entirely. But they also include "uncredited" directing credits, of which The Lady from Shanghai is one. If I remember correctly, his credit is something like "production by Orson Welles," and there is no director credit at all.

To be sure, I'm trying to focus on features Welles directed in this series, but how I will draw the line and what I will consider to qualify will be something of a crapshoot. For example, in poring over those self-same credits, I noticed that he actually has another "uncredited" directing credit before this, the movie Journey Into Fear from 1943. Why is this film not on my radar, and why didn't I start this series watching it? Well because it is not listed in Welles' filmography as director on Wikipedia, and that's the first resource I used to determine which of Welles movies I had not yet seen. (Easier than sifting through 62 directing credits, I can tell you that.) Or rather, Wikipedia does list it but lists only that one as uncredited, not Shanghai, which is why I thought I should include one but safely exclude the other.

Am I ever going to get to talking about The Lady from Shanghai? Soon. Soon. Patience.

The first thing I noticed about The Lady from Shanghai was that it probably also could have qualified for my noir series. Although a lot of the action takes place during the day, on a boat at sea, that self-same Wikipedia lists it as a noir right there in the opening paragraph. It's really the character dynamics and the femme fatale that make it a noir, though there are some other things I'd point out if I were doing this for the noir series (like the slats of one of those revolving doors throwing shadows across Welles' face in one of the film's final scenes). If I hadn't already watched Gun Crazy this month for Knowing Noir, I suppose I could have cheated and just done a two-fer.

Another thing that makes the film recognizably noir is its serpentine plot, which I probably would have had trouble following anyway, even with the unwise decision to have a whiskey with the movie. Given that I had been waking up extra early the few days beforehand -- excessive concern over being the only one to get my kids ready for school with my wife out of town -- any kind of alcohol was a questionable choice, and whiskey likely especially so. But I think I would have been a bit lost even without the need for a couple impromptu five-minute naps during the movie.

The basic story is that Welles plays Irish-born sailor Michael O'Hara, pulling off the accent with only occasional lapses, who is lured by the femme fatale into crewing on a ship owned by her older husband, a powerful attorney who walks with the assistance of two canes. She's Rita Hayworth, and he's Everett Sloane, who I recognized as one of Kane's closest confidants in Citizen Kane. (He worked at the newspaper, and reluctantly says "That one" when pointing to the headline that involves Kane's election loss being a fix job.) If you can believe it, I think this is the first time I have ever seen Rita Hayworth in a film, knowing her primarily from the plot function she plays in The Shawshank Redemption. Alas, she did not strike me as particularly charismatic.

Anyway, it's a long journey from the east coast of the U.S. to the west coast, through the Panama Canal. Along the way the two fall for each other, but O'Hara also receives a proposition from the attorney's business partner, played by Glenn Anders, who offers O'Hara $5,000 to pretend to kill him. The man has designs on faking his own death and getting away to some island paradise, with the "proof" of his death being that O'Hara has signed a confession saying he did it. Only thing is, legally they cannot charge O'Hara because the man's corpse will never be found, but the confession will be proof enough in the eyes of the law that he's dead. Sounds fishy, but O'Hara agrees to go along with it.

From there it gets far more complicated in ways that I shouldn't spoil, but probably couldn't anyway, as I had to read the plot synopsis afterward to make sure I'd gotten everything. It's one of those plots where even if you read it afterward to confirm what happened, you still aren't sure if it really hangs together, as it involves double crosses that don't totally seem to make sense, and characters acting naively in a way that counteracts their best interests.

If I'm looking for the Welles of Citizen Kane in this film, I'm not really finding him, despite a few touches here and there that recall some of the director's interests from that film. For example, there's a climactic scene involving funhouse mirrors that reminded me of that shot at the end of Kane where we see Kane's image reflecting over and over again, the perfect distillation of the character's loneliness and isolation at that point in his downfall.

But not seeing that great ambition at work here was probably also a function of the turn Welles' career took after his follow-up to Kane, The Magnificent Ambersons, was botched and rendered unrecognizable from Welles' original vision after he lost final cut. It's easy to see why he would, or why he had to, go in another direction after that, turning a buck on smaller genre projects. I suppose the film is ambitious in terms of its plotting, though I found the filmmaking itself pretty workmanlike.

I did enjoy The Lady from Shanghai enough to narrowly recommend it. There are some pretty lively sequences, particularly one where Sloane's character ends up both the defense attorney and a material witness in O'Hara's eventual trial. This leads to him being in the unusual position of cross-examining himself, including both his questions to himself and his answers to those questions. This has the jury in stitches, and would have had me in the same condition if I hadn't been so tired.

Overall, though, I fear this is a harbinger of things to come, as there's a reason that many of Welles' later films did not get the same recognition as Kane did, and that his career is often thought of as a missed opportunity. Fortunately, he had films after this that I really liked -- such as Othello and Touch of Evil -- so there's at least a decent chance things will get better from here.

If I continue to go chronologically, and I don't see why I wouldn't, next up in April will be another Shakespeare adaptation, his 1948 version of Macbeth. Given that this is not one of my favorite Shakespeare tragedies, there could be more disappointment on the horizon.

Posted by Derek Armstrong at 11:09 PM