A return to streaming at its streamingest 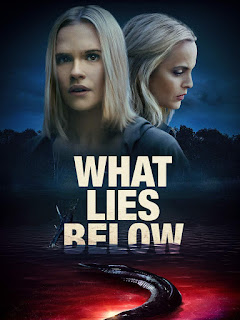 I stopped watching DVDs on Thursday night, then it was three straight nights of streaming -- including one digital rental, not quite streaming in the same sense as I had to pay for it.

I shouldn't have had to pay for the digital rental, only it was an instance of the Netflix regional distances we used to suffer from all the time, but which haven't plagued us for years. I'll get to that in a moment.

When I say it was a return to streaming at its streamingest, I mean it was three different but very common ways I use streaming, especially as distinct from DVDs: 1) a Netflix new release, 2) a terrible horror movie from the dregs of Amazon's collection, and 3) a not-so-recent Netflix streamer but one that everyone is talking about, only I had to rent it through iTunes rather than watching it on Netflix. 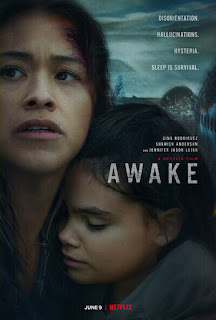 Although I wanted to watch the third one first, what I actually watched on Friday night when I couldn't find it available was Netflix's first new movie in a couple weeks that wasn't some foreign language genre film they picked up on the cheap. And that was Awake, a movie with a dynamite premise, even if I was bothered that it had the same title as another movie on my list (the 2007 hospital horror of the same name).

This Awake stars Gina Rodriguez as the mother of one of the only people who can sleep after some kind of solar flare functions as an electromagnetic pulse -- and also robs human beings of their ability to catch some z's. As one character puts it, "There is no longer such a thing as an unconscious person. You're either on, or ... you're off."

A pretty cool idea for a movie, a race against time to find a cure to the sleeplessness epidemic, as human beings are estimated to be dead after a week (and insane well before that) if they can't sleep. Rodriguez' daughter, one of only two people our characters have identified who can still drift off, is obviously going to be key to this possible cure, but the best scientific minds are obviously significantly less than that after even one day without sleep, let alone three or four.

It's a better idea than it's executed. There were some weird plot leaps where I thought I had missed ten lines of dialogue that would have explained where we'd suddenly found ourselves in the story. If I'd thought this were intentional, a way of putting the viewer into the foggy brains of the characters, I would have forgiven it better and even embraced it, but it seemed like a narrative failure at the script level. Still, director Mark Raso is obviously talented as there are a couple virtuoso sequences here involving camera placement and difficult single takes with impossible choreography, which put me in mind of Children of Men now and again. (There'll be a review of this up to the right shortly, possibly as soon as you read this, depending on when you read it.) 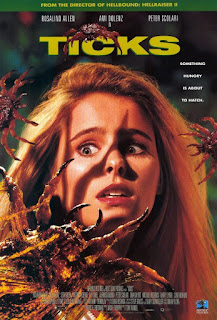 On Saturday night I decided to dive into Amazon's bottomless cheap-o horror section and go swimming.

You can literally go on forever passing over interchangeably terrible movies until you find the Platonic ideal of a terrible Amazon horror movie, but I didn't spend as long in that section as you might think. That's because I quickly found the 1993 movie Ticks, about mutant ticks killing people in the woods, and found its parts were less interchangeable than I might have thought.

Yeah, there were familiar faces here, from Seth Green to Alfonso Ribeiro to Peter Scolari to none other than Ron Howard's brother and father, Clint and Rance. Fun fact: I was not even aware this familiar character actor was Ron Howard's father until I saw his name listed next to Clint's in the opening credits and made the connection. Fun fact #2: Clint Howard has actually appeared in some films that did not have his brother attached in any way, shape or form. Never knew that.

So yeah, Clint Howard is one of the early kills -- a guy who is feeding some kind of growth serum to a marijuana plants in a secret manufacturing facility in the woods. The stuff, which looks like green toxic sludge, oozes out and infests the local tick population, causing them to grow to about the size of a human hand -- or actually, I should say, to spawn new ones birthed out of some kind of gross egg sac that are that size, and are particularly aggressive. And that's a problem for a trip to a cabin in the woods that's kind of like an outward bound program for wayward inner city youth.

I was all ready to write this movie off entirely -- I knew it would be a surefire way to end my streak of 14 straight movies that I had given a positive star rating of at least three stars, and indeed, it did do that. But Ticks does find that perfect "so bad it's good" quality that we all seek in terrible horror movies, made all the more enjoyable by the familiar faces you never knew were involved in this movie (in part because you never knew it existed). There are some great practical effects here, and though the overall quality of the filmmaking is poor, it's poor in the right ways. I expected it to be a one-star experience on Letterboxd but I actually gave it two stars as an acknowledgement of the enjoyment I derived from it.

Okay, now the movie I teased at the start, whose poster you have already seen.

Sunday night was the third of a long weekend (it's the queen's birthday, don't you know -- though only observed, as she was born in April). So I settled in for another night of streaming schlock, the one with which I had hoped to open the weekend.

I heard about What Lies Below on an April episode of the Slate Culture Gabfest podcast. It's a sign of of how far behind I am that I just listened to it on Thursday. I immediately lined it up for my Friday night viewing, and since I knew it was on Netflix I thought it would be easy peasy.

Imagine my surprise when I learned that it's only on Netflix in the U.S. It's gotten to the point where if I hear that a movie is on Netflix, it's because it's a Netflix original film, and it plays everywhere. I guess not everything falls into that bucket, even though on the podcast they talked about how it was the stated ambition of the director -- Braden R. Duemmler by name -- to make a movie that would get talked about and appear in the Netflix top ten, which it did. That truly is streaming at its streamingest.

As I hinted at the outset of this piece, we used to always bemoan the fewer titles available here than in the U.S., which is the reason we tried to watch Netflix through a VPN for our first few years here. (In fact, for about the first year we got here, that was the only way to watch it, as it had not yet debuted in Australia -- hard to believe Netflix wasn't available in Australia only seven years ago.) As an indication of how much has changed since then, I can't remember the last time I thought about whether there were movies available in the U.S. that aren't available here. At first we were precious about the titles that had been in our queues in America, which seemed like important viewing guidelines rather than just the dumping grounds they've become, where titles you're vaguely interested in go to die. To quote something we sometimes tell our kids, since then it's been "You get what you get, and you don't get upset."

Until Friday night, when I did get a little upset to hop on Netflix and discover that the movie I planned to watch that night just wasn't there. That was when I pivoted to Awake, which I'd been planning to watch this weekend anyway in anticipation of reviewing it.

Instead of giving up on the dream of What Lies Below entirely, I decided to just bite the bullet and rent it on iTunes on Sunday.

Why a dream, you ask?

What it delivers is far weirder, and though it was spoiled for me on the podcast, I won't spoil it for you. I'll just say that you will likely think of H.P. Lovecraft as you watch this movie, and leave it at that.

And though this is not a "good" movie by any stretch of the imagination, like Ticks, it succeeds at being a perfect specimen of the weird thing that it is. There's lots of bad technique, some good technique, and enough truly out-there surprises to make it a delicious viewing for the third night of a long weekend.

And now that I've had a long stretch of DVD viewing followed by a short stretch of deliberate palette cleansing, I will go back to just watching whatever movie is next on my slate, available through whatever delivery method presents itself.

This will also end another lengthy stretch of movie watching in general, as I will finally rest on Monday night after watching at least one movie for 17 straight days. That's probably not a record given the flurry of activity that frequently attends the end of my movie-watching year in December and January, but I do feel pretty tired.

Posted by Derek Armstrong at 10:22 PM