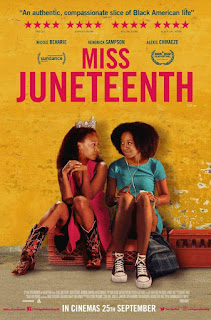 I only just this morning learned that the U.S. had made Juneteenth an official national holiday. (It only happened two days ago, so I guess that's not so bad.)

This after only learning last year there was a thing called Juneteenth, as a result of watching the movie whose poster I'm including here.

Just another reminder that while we can sometimes be slow on the uptake, it's never too late to make things right.

I don't blame myself, really, for not knowing what Juneteenth was until last year. You can't seek to acquire more knowledge about things you did not know were things. Maybe if I'd been a little more clued in in certain areas, I would have known about it, but alas, I was not.

It's much easier -- and fair, I think -- to blame the United States on the whole, specifically an education system that didn't think it was worth us knowing about June 19th, 1865, the day slaves in Texas were finally made aware of their emancipation by Abraham Lincoln three years earlier. Maybe it wasn't part of any of my curricula growing up because it's sort of an odd thing to celebrate -- not the day Lincoln actually emancipated the slaves, but the day the final slaves were granted their freedom. It tends to draw attention to the fact that thousands of Americans were enslaved three years longer than they needed to be.

But it's another right step by the Biden administration to help redress those wounds, and continue to heal the new wounds created by the events of last year and the Trump administration on the whole.

As for the movie? I wish I could say that it's a resounding success, but I can only give it a modest recommendation. If you'd like to get into more of my thoughts, you can read my review here.

I'll leave you with a photo that makes me smile, just as the people in this photo are smiling -- not because they knew the cameras were on them, but because Biden's signature authorizing Juneteenth as a national holiday was a great moment in modern American history. 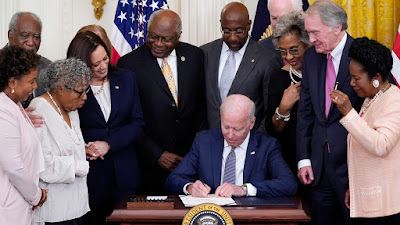 Posted by Derek Armstrong at 9:17 AM