Perfect pauses: Happening, and protesting America on 4th of July 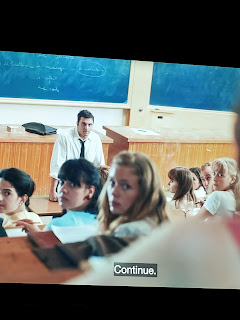 The timestamp of this post won't show the 4th of July -- it's July 5th in Australia -- but as I type this, Americans are at BBQs scheduled to celebrate the independence of the United States from England. It's a day that has traditionally prompted patriotism even in those naturally inclined not to show it. American flags might not be their thing, but usually they'll throw America a bone one day a year.

As we are all still stinging from the Supreme Court overturning Roe v. Wade, I thought I'd put up sort of a protest post today -- in part because it was something I was planning to put up when I wrote about the movie Happening last week, only I forgot. (Plus, posting something French on Independence Day will stick it to a particular subset of the American population, who think France embodies everything they hate about countries that are not America.)

One particular pause during the movie -- what I have periodically identified on this blog as a perfect pause -- yielded me the image you see above.

The main character, Anne, is receiving the prompting from her professor to "continue," as all her classmates look on. It's a particularly fraught moment for her, as we saw her thrive in a similar scenario earlier in the movie. Now, she's been distracted by her attempt to attain a safe abortion and has fallen behind in her studies, leaving her incapable of answering the professor's question and all her classmates fixing her with accusatory stares.

However, in another way, these are stares of anticipation. And the word "continue" is particularly fraught, as it gets right to the core conflict of the movie -- whether to "continue" a pregnancy or not. Everyone in this shot, including the professor, can be seen to be challenging Anne to bring her baby to term -- the perception of a silent pro-life majority, even if the statistics do not bear out that such a silent pro-life majority exists.

Anyway, as an isolated image, it speaks a lot about the film on the whole.

Posted by Derek Armstrong at 12:02 PM