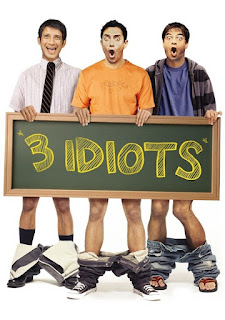 This is the 10th in my 2022 series Audient Bollywood, in which I better familiarize myself with Bollywood filmmaking.

When I first came across the title 3 Idiots (2009) a couple years back, I had two immediate thoughts:

1) "Huh, I guess the Indians make lowbrow comedies, just like we do."

2) "But they still make them nearly three hours long."

I was right about one of those two things.

Although 3 Idiots does indeed contain some puerile humor -- a guy gets an electrical jolt when he pisses on a conductor, for example, and there's a lot of pants dropping and spanking of the exposed rears that result -- my first tipoff that it wasn't most appropriately defined as a "lowbrow comedy" was that "comedy" isn't even one of its genre assignments on Netflix.

I'd figure whoever was assigning genres on Netflix would have just thrown "comedy" in there based on this poster, but instead, the genres are "social issue dramas," "movies based on books" and "Indian." Then there's the section that says "This movie is," and for 3 Idiots the moods are considered to be "sentimental, irreverent, emotional."

It was almost enough to make me balk at my choice when I fired it up on Saturday afternoon. In realizing I only have three movies remaining in this series, I've wanted to utilize those slots for specific purposes, one of which was to watch a straight comedy -- something that maybe the Indian version of the Farrelly brothers would make. If 3 Idiots wasn't going to be that, should I just pass it up for something else that I otherwise won't fit in, like an LGBTQI+ movie?

But I trusted the implied tone of that poster and went forward with the choice, and boy am I glad I did. 3 Idiots gets in all those tones, and the comedy too.

The three idiots of the title are engineering students at a top university devoted to that pursuit, and one of them is played by Aamir Khan, who is the star of last month's Lagaan: Once Upon a Time in India. (He's the one in the center, with the orange shirt.) The movie is told from the perspective of ten years on, when a rival (not pictured) tries to hold Rancho (Khan) to an agreement he made to return to this rooftop meeting spot in a decade's time to see who was more successful. See, the rival (Chatur) believed that constant studying, and periodic backstabbing, was the path to success, while Rancho favored questioning the system that places so much pressure on its students, and outside the box thinking. But Rancho has not been seen since graduation.

The film is a bait and switch in the best of ways. We are indeed set up for a broad comedy when Farhan (R. Madhavan, the idiot on the right) gets a call from Chatur (Omi Vaidya) just as his plane is taking off, stating that Chatur has found Rancho. Farhan fakes a medical emergency just so the plane will land and he can hurry off to meet Chatur. Similarly, Raju (Sharman Josi, left idiot) gets roused from bed by Chatur's phone call, and leaves the house without wearing shoes or pants.

What follows, though, is a sometimes sobering consideration of how academic pressures, and the pressures to make one's parents proud, can lead these students down dark paths. There's one suicide within the flashback story we follow for most of the time, which runs through their four years at the university; there's another attempted suicide; and there's a third suicide referred to before the events of the story. The shrewd adjacency of the film's primary two tones is highlighted during one particular dance number -- I believe it was called "All Is Well," which is Rancho's mantra -- that is very cheery ad high energy, though it ends with a drone the students built rising up to the outside of a classmate's window, where we see him having hanged himself. It's a devastating choice by director Rajkumar Hirani, highlighting the fact that for these driven engineering students, indeed all is not well.

This classmate had asked the school's director, Dr. Viru Sahastrabudde (Boman Irani), for an extension on a key project, since his father had recently had a stroke. "I can give you sympathy but I cannot give you an extension," he barks. There's a reason the students have nicknamed this man "Virus."

3 Idiots has it all ways, and the extraordinary length of 2:43 -- extraordinary for a "comedy" if not for a Bollywood film -- allows us to really get to know these characters and understand their particular arcs. Farhan is trying to make good on the sacrifices his family made for him, giving him the house's only air conditioner so he could sleep well and study, and forgoing a car just to pay for his education. But he really wants to be a photographer. Raju actually does want to be an engineer, but he's having difficult with the pressure -- and he knows his family, including his very sickly father, is relying on his education to raise them out of poverty. Rancho is the mystery, the inspirational leader, the manic pixie dream boy, though we eventually learn why he disappeared after university and where he is now. The generous time spent with the characters almost comes to resemble what you would get over the course of a season of a streaming comedy, maybe something like Never Have I Ever -- though the fact that both are about the Indian experience is strictly coincidental in this comparison.

And of course it is a Bollywood film in all the ways I have come to expect and love over the course of this series. There are about a half dozen song and dance numbers, the most memorable of which takes place in the students' shower as they are covered in soap. And of course there is a love story between Rancho and Pia (Kareena Kapoor), who is the daughter of the director -- naturally.

The successful exploration of its social message about students under pressure, which never feels too heavy handed, is what really puts the cherry on top of a very entertaining film. It never gets weighed down by these considerations, nor does it make light of them or short change them. The end result was one of my favorite films in the series so far.

Only two installments left of Audient Bollywood. I'll miss it when it's gone -- which of course only means that I'll be more inclined to keep watching, just for pleasure. That's the goal of any series I do.

Posted by Derek Armstrong at 8:04 AM