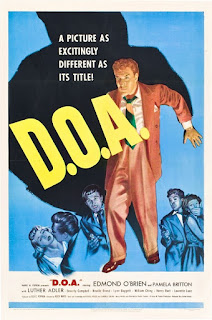 This is the fourth in my 2021 series watching film noir I have not yet seen.

In an attempt to return to a more "typical noir" territory in April after two months watching movies that adhered less to the standard noir components, I ended up with D.O.A., the Rudolph Mate film released in either 1949 or 1950, depending on where you look. (It had a December 1949 Los Angeles premiere, so I've decided to go with 1949 for my own records.)

D.O.A. doesn't feature a private dick or an obvious femme fatale, but it deals with a notary who becomes kind of an amateur private dick as he tries to solve his own murder. As you would know from the 1988 Dennis Quaid remake -- if you are about my age, though I haven't seen it -- the lead character is fatally poisoned, and has only days if not hours to discover who put the lethal mickey in his drink.

Unfortunately, being back into similar territory to where I started -- not liking the Humphrey Bogart vehicle In a Lonely Place -- I quickly grew weary of the fast-paced pileup of dialogue in D.O.A. Making me wonder if it's not Bogart himself I object to, but any performance that imitates the rapid-fire rhythms of a Bogie performance. And that's the type of performance Edmond O'Brien -- who even looks a little like Bogart -- gives here.

I won't get too much into a plot description. Sorting out the serpentine plot is never one of the things I like most about any movie, and the fact that many noirs feature serpentine plots has been a barrier to entry for me in the past. I barely have time to absorb the misdirection the plot wants to give me before it's revealed as a misdirection, minimizing the amount my mind might be blown by such a reveal.

But I did have a basic issue with the way the action is structured in this film, which may be a consequence of its tight 83-minute runtime. After learning he's been poisoned -- his whiskey didn't taste very good the night before -- O'Brien's Frank Bigelow proceeds to make the rounds visiting suspects or people who may have other information about what happened to him. Rather improbably, this also includes a plane flight to Los Angeles, when he's currently vacationing in San Francisco. Given the short remainder of his lifespan that has been diagnosed by not one, but two doctors, it seems hard to believe that he'd lose four hours on the logistics related to getting to Los Angeles, especially if he's expecting to return to San Francisco in the same day. It felt like one of the many less believable moments in the TV show 24.

The real problem with all of Bigelow's scurrying around, though, is it's only possible as a result of disinterested parties providing him the exact information he needs with almost no prompting. In what would seem to be a direct violation of basic customer services, such as privacy, hotel employees and others who don't know him from a hole in the ground are receptive to his every inquiry, and provide answers without even really figuring out who he is. If his busy schedule only allows him to be in a particular place for a couple minutes, you better bet he'll extract the information he needs in that limited time, because the script requires it in order to maintain momentum.

It becomes increasingly ridiculous as the film goes on. Even people who would stand to be compromised by giving up this information give it up freely. Included in this group are the brother and widow of a man who committed suicide the day before, who receive him without question despite their fragile emotional state. Not only is this not believable, but it reduces Bigelow's agency as a character. Instead of having to be clever and sleuth out the answers he needs based on available clues, all he has to do is physically go to the location where these people are and they will cough up the information with little or no incident. As a result, the movie is really just a series of scenes of talking heads in rooms. (There's a little bit of action near the end, but it felt too little, too late.)

The reason Bigelow was poisoned also disappointed me. I thought a good noir cause would be responsible, like a jealous husband knocking off his competition. But no, it's Bigelow's work as a notary that does him in. His signature was on a shipment of iridium that turns out to have been stolen. I guess killing Bigelow is considered an essential part of covering their tracks, even if he was just performing his professional duties and ignorant to the actual content of the shipment. I'd hoped his murder would stem from a tragic flaw, but it's more just a matter of being caught in the crossfire.

That's not to say Bigelow does not have a tragic flaw. He leaves his girlfriend/secretary (Pamela Britton) behind at home on the trip to San Francisco, as it's heavily suggested he wants to chase tail while he's out of town. This despite the fact that she is sweet and beautiful and obviously loves him very much.

The way his wandering eye is depicted, though, is silly and intentionally comedic, which is wildly out of of sync with the rest of the tone. As he first checks into his hotel and attends a party, and his head is turned by every curvaceous figure that passes him, the soundtrack actually employs a slide whistle to approximate his level of stimulation. It seems hard to believe I'm not joking when I say this. The slide whistle goes through its range of notes from low to high, suggesting in the most goofy way possible that he's becoming aroused. I could see this in a comedy, but not in a noir whose tragic ending is already known to us.

I suppose this whole sequence is necessary for the Hays Code, which was big on punishing characters with sketchy morals. In a way, Bigelow's downfall is the result of a tragic flaw, as his prospective philandering is what puts him in that bar that night, flirting with women. Of course, the criminal conspiracy dates back several months, so you'd figure he would have been targeted no matter where he spent that particular evening. But I think one of the reasons he's portrayed as such a horndog is to make us accept it a little more easily when he's unable to miraculously find the cure for what ails him. If he dies, he deserves it on some level. We're meant to appreciate the film's twists and turns purely on a narrative level without having any problematic feelings toward the protagonist that complicate our enjoyment.

On a purely technical level, there's not a lot that reminded me of noir tropes here. Much of the action seems to take place during the day, the brighter the sunlight the better. The most interesting technical innovation is a long tracking shot that opens the movie, following Bigelow from behind as he makes his way through a police station to the homicide division, where he famously reports his own murder. But it didn't feel like it owed anything to the film's status as a noir.

Even though I'm 0-2 on movies that "feel" like noir and 2-2 with those adhering to a broader definition, I think the former is where I need concentrate, as that will really allow me to continue interrogating the premise on which this series was founded. With that in mind, on to May.

Posted by Derek Armstrong at 4:11 PM