The benefits of knowing the source material 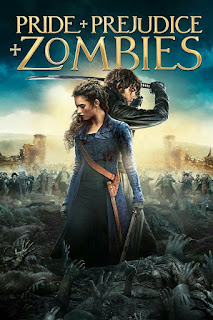 If you're watching an adaptation of a famous text, it can be better not to have consumed the text in question, as it can create more opportunities for surprise in the filmgoing experience. That's not to say you should not watch the adaptation if you've already read the book -- there are plenty of ways that can be a satisfying experience, and I'm usually eager to do it -- but there can be benefits to coming in fresh.

If you're watching a parody of a famous text, though, it's usually a good idea to have the frame of reference going in.

And that's why I was really eager to get back to Pride and Prejudice and Zombies after finally reading Jane Austen's seminal novel last year. On Friday night, I did just that.

Back in 2016, when I first watched the movie, I wrote a whole post about not being qualified to judge the film's success, because I'd never read -- or seen any filmed version of -- Pride and Prejudice. It's probably good that the finer details of the plot went in one ear and out the other during that viewing, as it didn't impact my eventual reading of the novel. (I knew that there was a happy ending for all the characters you care about, but I think I knew that anyway just from random references to Mr. D'arcy in the culture.)

After finishing the novel last June, I was eager to get back to Pride and Prejudice and Zombies pretty quickly, so the details of the novel would still be fresh when I watched it. At that time it had temporarily disappeared from streaming, though, and I was not quite so keen as to pay for a rental. In recent months, I noticed it appearing on Netflix again, setting up Friday night's viewing.

Now that I know the book, I can recognize this as a pretty faithful adaptation of it -- and a pretty credible one at that. I still wouldn't say this is a great movie, but it's probably at least a half-star better than the 2.5 stars I gave it upon first viewing.

I was worried that it wouldn't seem very faithful when the film opens with a prologue involving D'Arcy -- a zombie hunter, in addition to being a wealthy gentleman -- arriving at an afternoon of cards among the social elite, and proceeding to decapitate the one who's been hiding a festering zombie bite that has not yet fully transformed him. (In a clever bit, he can identify the man through a vial of flies he carries with him, who are attracted to dead flesh.) This scene obviously has no corollary in the novel, and I feared similar liberties would be taken throughout.

But no, actually, once the proper plot gets going, it hews pretty closely to the details of Austen's novel. Sure, there are some characters excised or at least underrepresented, some moments in the plot that are transformed a little to accommodate the zombie skin, as it were, that the film wears. But a lot of what happens is basically what happens in the book, and since I knew that book now, I found this a lot more engrossing than the periodic moments of zombie mayhem.

When I originally watched the film, I was curious about the blunt disconnect between the two genres represented, without much care for the finer details of the story. Intricate character dynamics can be lost on a film viewer, to the point that you even stop trying to sort them out, whereas the reader of a novel has more time to live with the characters and go back over paragraphs that they may have read too quickly if their mind was on other things. Now that I'd had this experience, I found the character dynamics more rich this time around, such that it was the zombie stuff I was brushing off as kind of inessential to my viewing experience.

A lot of the zombie stuff does seem sort of shoehorned in, as is an obvious component of this type of project to begin with. But one thing I appreciated about the film this time is how conflicts between characters in the novel, which obvious remain genteel and non-physical, are here played out as action set pieces. When two characters clash in the book, here they clash with actual swords and fisticuffs in keeping with the desire to please those who have come to this movie for its action/zombie trappings. It works as a metaphorical exploration of the novel's linguistic clashes, and allows for some humorous moments.

Overall I still find it to be a trifle, a novelty act at a core level. I'm not suddenly interested in reading Pride and Prejudice and Zombies, Seth Grahame-Smith's 2009 parody novel. I don't think I'd get anything out of it that I wouldn't get in a lot more satisfying fashion with a re-read of Austen's novel.

But I'm glad for its existence and find it interesting as a dedicated realization of a genre mashup containing two genres that are diametrically opposed. The Austen stuff is better than it had any right to be, and the zombie stuff ain't half bad either.

Posted by Derek Armstrong at 9:01 AM

Labels: pride and prejudice and zombies