The Arclight goes out 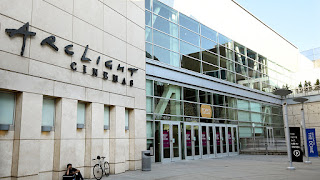 But that doesn't mean it's not a sad, sad day for me.

Arclight Cinemas -- the chain that brought arthouse films to the masses with high-end auditoriums, comfortable seats and taking your beer into the movies with you -- has declared it is going under.

The actual wording in their statement is "not reopening" and "handing the keys back to the landlord." This last suggests maybe the announcement is a negotiating tactic, to bring attention to the company's financial plight in the hopes that someone will swoop in either to save it, or to put pressure on the landlords.

So there's some hope. But we can't really bank on the continued existence of one of the most prestigious and well-liked chains if you liked good cinema.

I was a regular Arclight customer. The flagship location in Hollywood was only a special occasion visit, since it wasn't particularly near anywhere I lived. But its world-famous Cineramadome, which had the world's largest contoured screen, was a great place to take in an epic spectacle (I saw Peter Jackson's King Kong there, among others). One suspects that will continue to operate as a cinema, even if under new ownership.

But Arclights kept on popping up near where I lived, most recently the one in Sherman Oaks, which was only a couple miles from where I lived in Van Nuys at the end of my time in L.A. The locations were known for their dramatic appearances, with lobbies that had 60-foot ceilings, opulent bars and eating areas, and a beautiful shade of mahogany wood paneling throughout. The Arclight screamed refinement.

They were also one of the first places I can remember having stadium seating, comfortable reclining chairs, and a minimum of pre-show ads. It was the perfect place for a movie date night, even in if your date was a sophisticate you would not normally take to the movies.

Arclight started out primarily as a purveyor of arthouse films, but that model was not sustainable with the number of screens each location had. Pretty soon they were just as likely to have Star Wars on five screens as the next place, by necessity. However, even in its later years, you could always find a new buzzed about Oscar hopeful that had not gotten a wide release yet, or an indie darling people were only just starting to discover. It was the kind of place where you knew you'd love the experience, even if you didn't love the movie.

The timing of this announcement is particularly sad, as L.A. is finally reopening its cinemas and aiming toward full capacity in June. After a year of not going to the movies, Angelenos were certainly ready to fill the seats at their local Arclight. In fact, the Hollywood Arclight was, I've just read, the most profitable single theatrical location in the whole country.

But like so many things that have faded, steadily or abruptly, from the landscape during COVID, now so too does the Arclight go down that path.

I really hope that this is something, collectively, we can't afford to lose from the cinematic landscape. Which means that indeed, we may reasonably expect some swooping, and hopefully, some saving of the Arclight.

If they brought back Twinkies from the edge of extermination, maybe they can bring this back as well.

Posted by Derek Armstrong at 9:49 AM