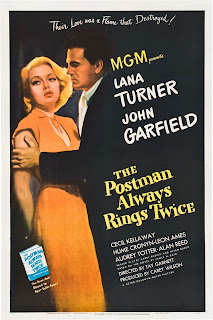 This is the latest in my 2021 monthly series watching classic film noirs.

I've been watching film noirs for nine months now, and I think I may have just encountered my first homme fatale.

You know, a male version of a femme fatale. I assumed the term existed, because I couldn't be the first person to think it up, though it's obviously far less common than a femme fatale. The first result in google is not a description of the term, but a 2019 Korean film of the same name. (Whereas the 2002 movie Femme Fatale is all the way down at the second result when you google that term.)

I'm not sure if The Postman Always Rings Twice considers John Garfield's Frank Chambers to be an homme fatale -- which is one of the reasons the film is not as successful as it might have been -- but all the evidence is there.

Sure, the film introduces Lana Turner's Cora Smith like she might be the standard femme fatale, as Frank's first glimpse of her is her bare legs. She's a beauty and she does tempt Frank to go on a wayward path, which would fit the normal description of a femme fatale. But I'd argue that Frank's impact on her is far worse than hers on him.

Despite her not really flirting with him at all, Frank takes it upon himself, very early in this residency at a roadside restaurant where he's assisting the husband and wife who own it, to kiss her -- the wife of the man who's been nothing but kind to him and taken him into his employ. She doesn't return the kiss, and in fact, according to Frank's narration, she spends the next week or so steering clear of him and not making eye contact with him. So who's at fault in tempting whom, exactly?

Frank's own description of himself reminded me of descriptions of other femme fatales so far in this series. He always tells people his "feet are itching to go places," which suggests the same sort of lack of dependability implied in the comment "You're like a leaf floating from one gutter to another." That was Jeff Bailey's description of Kathie Moffat in last month's Out of the Past, and you might say the same thing about Frank Chambers. He's reckless and he's brazen and he doesn't care if he gets caught or who he hurts. He can always just move on to the next town.

If the movie had seen through the notion that he's ruining Cora's life, rather than vice versa, it might have felt like a profound inverse of the normal noir tropes. But not particularly far into the noir period (1946, though James Cain's novel was written in 1934), it doesn't seem like director Tay Garnett or screenwriters Harry Ruskin and Niven Busch are interested in exploring anything very radical. When they do inevitably fall for each other and they do decide to kill Cora's husband -- a task it takes them two separate schemes to accomplish -- the movie wants us to believe it's Cora's idea. But it's Frank who first utters the idea -- though he later swears he was not serious -- and besides, it's Frank who throws himself at her with such shameless gusto. (Gusto that's all the more reprehensible given that Nick Smith's greatest sin is that he's a bit of a drunk and that he might be just a tad domineering of his younger wife, but really, in sort of an amiable way, if such a thing is possible.)

Another thing that set me against Frank is that I didn't find John Garfield very compelling in his role. I though this was my first experience with the actor, and since he died at only age 39, that wouldn't have been such a surprise. As it turns out, he was also in Gentleman's Agreement, but I don't remember him from that. I just felt he was pretty low on charisma, and certainly out of the league of someone like Lana Turner. (I can see from Wikipedia that he was blacklisted as a possible communist, which makes me feel bad for him -- though it doesn't make him any more charismatic.)

Turner is another one of those actresses like Rita Hayworth, who I know by reputation more than from seeing her films. In fact, I know Turner primarily from the fact that she's a character in L.A. Confidential, only very briefly. Despite her appearing in more than 70 films, the only other one I'd seen was The Imitation of Life, which finds her seeming much older even though it's only 13 years after Postman. Here she is in her ingenue prime at about age 26, though I can't for the life of me figure out why they wanted to put her in some sort of white headdress for most of the movie, when her hair looks so much nicer out.

She had the charisma that Garfield lacked, and she elevates him on screen enough to give them a good, steamy chemistry. However, I found the story itself to be quite protracted, with the characters alternating wildly between loving and hating each other as they get in and out of legal trouble. The scenes depicting their attempts to kill Cora's husband are probably the best, if only because they represent bursts of action in what is otherwise a story weighed down by a lot of talking.

I started out taking notes for other noir elements -- you know, shadows and the like -- but I didn't keep it going very long, in part because I was so tired Monday night when I watched it. And because I am also tired now as I write this, I'll leave off here.

But I can't go without mentioning one face in this movie that was really familiar to me: Hume Cronyn. I had always known Cronyn from his appearance in Cocoon, and had never seen him as a younger man. Never mind the fact that I spent the first half of the movie thinking he was one character before realizing he was another.

Three months left of this series, with plenty of choices left -- though fewer now that I have been unable to source a second movie I wanted to watch, Otto Preminger's Laura. You may remember I was frustrated in a previous attempt to get my hands on Kiss Me Deadly. Still, there's obviously quite a lot left that I haven't seen, and actually not too many slots left if I plan to close with another Bogart film in December.

Posted by Derek Armstrong at 9:31 PM