R.I.P. to a "dirty" comedian and an unexpected comedian 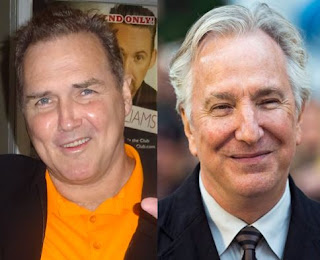 Last night, on my documentary alternate Tuesday, I watched Never Surrender: A Galaxy Quest Documentary. I wasn't sure if it was the right choice for this ongoing series (they've felt a bit forced each of the past two times), but as soon as I started watching I was grinning from ear to ear.

Near the end of the movie they pay tribute to Alan Rickman, perhaps the only of the film's major stars they couldn't interview for this 2019 feature. They talked about his generosity, his dry wit, his kindness, and yes, his sense of superiority over fools he couldn't suffer or sub-par material -- some of which was exaggerated for the comic effect of playing up his own persona. It got me all sentimental about Rickman again.

This morning, as I was putting away the dishes and still thinking about it, I wondered why I had never written an In Memoriam post for Rickman on my blog. This was early 2016, and maybe my memorial posts were more sporadic back then. My mind then naturally travelled to wondering what other big stars I had failed to memorialize, and who would be the next.

Two minutes later, I pulled up to my computer and discovered that Norm MacDonald had died. He had been privately fighting cancer, and passed on at age 61.

MacDonald was not of Rickman's stature, and his influences were more in the television arena than the movie arena. But I couldn't ignore the confluence of events, and had to start writing this post right away ... maybe to honor both of them.

In checking my blog, where I had never even tagged Rickman in a post, I found the same was not true for MacDonald. Ten years ago, when we returned from a Mexican vacation to celebrate our third wedding anniversary, I wrote this post, which not only discussed the viewing of Dirty Work -- one of MacDonald's most significant contributions to the movie world -- but also specifically considered what makes his comic delivery so great. I won't repeat that stuff here, but I will invite you to click on that link if you want to read the thoughts I wrote back then.

It was all about the delivery with MacDonald, which is why he was so great at short jokes either on stage or on the Weekend Update desk on Saturday Night Live.

Here is one of my all-time favorite MacDonald jokes on Weekend Update, one that probably wouldn't be uttered today. I'm not going to google it in order to quote the wording exactly, but I think I can mostly get it from memory, and I will bold the part that he hit specifically for emphasis:

MacDonald knew how to land a punchline with the best of them, especially those that underscored the absurdity of something. It got him in trouble from time to time. He was fired from SNL for his relentless jokes about O.J. Simpson, which surely walked the line of good taste, but wouldn't have been a problem if he weren't pissing off an NBC higher-up who was friends with Simpson.

MacDonald wouldn't sanitize his comedy for anyone, even if it meant getting fired. He knew what was funny and he would continue to put it out there, regardless of the consequences. That doesn't totally work in today's world, but in the world of MacDonald's prime, it was exactly what we wanted.

And though the essence of his work was dirty, there was something about the cadences of MacDonald's line readings that made him right for any project where the idea was to make people laugh. I was delighted, a couple years ago, to hear his unmistakeable voice pop up in the vocal cast for the kids TV show Skylanders Academy as my kids were watching it in the other room.

I feel like I've watched Dirty Work fairly recently -- if you consider ten years ago to be recent -- but maybe it's time for my first Billy Madison viewing in ages, to honor him. His role of lying by the side of Billy's pool, drunk or stoned or whatever, occasionally looking up to figure out what the hell was going on, was perfect MacDonald. He did funny lead work in Dirty Work, but his essence may have been as an MVP supporting player for former SNL buddies like Adam Sandler. And if the tributes going out to him today are any indication, his contributions to the comedy world made him more of a giant in that arena than a supporting player.

Rest in peace to two greats, who may not have been as different from one another as it may seem. Never Surrender also discusses how the pairing of Rickman and Tim Allen never should have worked, but that Rickman's own previously untapped knack for comedy, as well as his personal generosity, led them to become a great on-screen pair, with an off-screen mutual respect that was real.

Maybe Rickman and MacDonald even could have made a movie together. I would have watched that.

Posted by Derek Armstrong at 8:36 AM