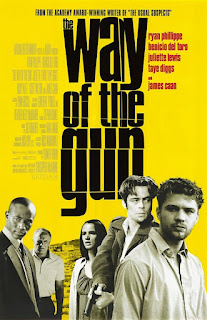 If you're like me, you'll look at the long crawl of credits at the end of a movie without really looking at it. Your eyes are pointed at the screen and information is hitting your cerebral cortex, but you're not really processing it. If you're like me, you'll read the acting credits, but words like "second unit director" then cause your eyes to glaze over. You keep watching, but you shift into the dutiful position of a person bearing witness. You're not actually taking anything in, not actually broadening the personal database of key grips and dolly grips you're aware of.

Every once in a while, though, you might find yourself a little nugget of something choice.

As I was bearing witness to the credits at the end of the 2000 film The Way of the Gun on Friday night, I saw a familiar name buried long past the point where I'm continuing to take in useful information. That name was Mike Lookinland, and if you're like me, a Boston area child of the 1980s weaned on the afternoon programming of WLVI, Channel 56, you know immediately who that is: 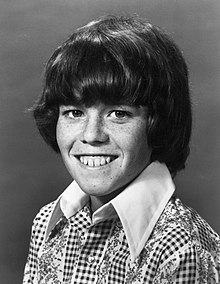 But surely if the erstwhile Bobby Brady worked on The Way of the Gun, it should be as an actor, right?

This is what interested me: This Mike Lookinland was credited as "First Assistant Camera."

No, it's the same one. Apparently, he shifted from in front of the camera to behind it. In fact, Lookinland has 20 camera-related credits on IMDB from 1987 to 2007, at which point, it seems like he gave that up -- though he does still appear in front of the camera from time to time, even now at age 60, as a TV movie called Blending Christmas is listed as in post-production. It should be noted, though, that this is his first acting role since 2003, when he played himself in Dickie Roberts: Former Child Star.

I'm sure taking up in another part of the entertainment industry is not uncommon for former child stars, or any other actors who aren't really making it in front of the camera. What's probably not as likely is for you -- and by you I mean me -- to notice their names among a flow of hundreds in a typical end credits crawl.

And if I didn't see Mike Lookinland's name in the end credits for The Way of the Gun, I might not ever have seen it. Of the 19 other projects he worked on as a first assistant or second assistant cameraperson, only two others were things I even recognized. One was a TV show, Everwood, that I never watched and probably never will watch. The other is Halloween 5: The Revenge of Michael Mayers. I have three other Halloween movies that I've never seen and probably never will see before I'd get to that.

IMDB thinks his work on The Way of the Gun was pretty significant, too. On the brief synopsis of his career on his IMDB page, it says "He is known for his work in The Brady Bunch (1969), The Brady Bunch Variety Hour (1976) and The Way of the Gun (2000)." The idea that a person would be known for performing the function of first assistant camera is, I think, hilarious.

I have two more things to tell you about The Way of the Gun.

One of them is this: 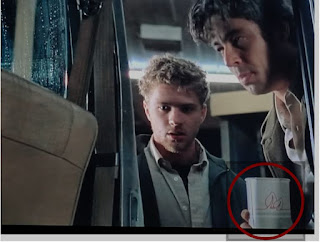 Do you remember this cup?

I hadn't thought of it in ages, but you used to always get your soda in these cups from random snack bars back in the day. In fact, I'm pretty sure we used them in the snack bar I worked in for a summer back in 1992.

White top, light gray bottom, with a sort of flame icon in red ink. What did that flame mean? Who even knew?

They are kind of like that generic white and blue coffee cup with Greek lettering and the columns of antiquity on the side, the kind you were particularly likely to see if you lived in New York.

The reason I watched The Way of the Gun on Friday night was because I once caught a few minutes of it on cable 20 years ago, and those few minutes stuck with me. I'm not sure why they stuck with me, except that they contained a moment of sudden violence that seemed very shocking in the context of not having watched the rest of the movie.

Spoiler alert, if you care about spoilers for The Way of the Gun.

The moment involved the death of Taye Diggs' character. I had no idea when it actually occurred in the movie, and when I finally watched it, I learned that it wasn't until the final 15 minutes. But the scene involved a tense standoff in a small room, and Diggs suddenly being shot out of the blue by one of the other people in the room. Shot in the chin, I realize now that I've watched it, but not instantly fatal -- he has a moment to kind of gape in surprise as he slumps against the wall and fruitlessly tries to apply pressure to the wound.

For some reason, this isolated moment had always sat in the back of my mind, leading me to think The Way of the Gun was some kind of profound comment on the suddenness and brutality of violence.

Finally watching the film, I know that this is not an accurate descriptor of this film. It's just another post-Tarantino crime movie, even if director Christopher McQuarrie has subsequently distinguished himself through several Mission: Impossible movies (with at least one more to come) as well as Jack Reacher. (In fact, this guy seems to work almost exclusively with Tom Cruise -- he was also writer for Valkyrie, Edge of Tomorrow, The Mummy and Top Gun: Maverick.)

It's not bad, and in its opening moments it even has a fair amount of promise. But then it degenerates into a bunch of really unbelievable shootouts and a series of strained character motivations.

Of course, what it's really known for is the camerawork of Mike Lookinland.

Posted by Derek Armstrong at 10:42 PM

Labels: credits, mike lookinland, the way of the gun