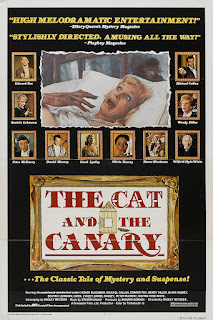 When you see an anachronism in a movie, usually it's something minor, like the watch you can see on the wrist of one of the extras in The Age of Innocence -- something that resulted from an oversight, a failure to scrub all the modern conveniences from a film that takes place a hundred years before the movie was made. (Apparently that wasn't actually The Age of Innocence, as I can't now find anything about it online.)

Sometimes, though, it's central to the plot, and the filmmakers either didn't notice or just didn't care.

I watched 1978's The Cat and the Canary as my latest in a month of trying to watch 1970s horror movies. Like the most recent film I watched, The Little Girl Who Lives Down the Lane, it's hard to say that this film's genre was primarily horror. I guess that's what happens when you cast your net using various google search terms. Not all the fish you catch are actually worth eating.

The Cat and the Canary was worth eating, but it's much more a murder mystery than a horror, and despite the presence of death in both types of movie, they are genres that barely overlap. This is a lot more like Knives Out than it is like a serial killer movie, even though the movie promises a "flesh-rending maniac" present in a house full of heirs gathered to read the will of their deceased relative. The poster above is pretty suggestive of delicious period hororr as well. (Though if I'd read a little more closely, I'd have seen it was described by a critic as "amusing" and by the poster itself as a "classic tale of mystery and suspense." It was free on Amazon Prime, so I didn't look too closely into it before watching.)

No matter. I enjoyed it, despite it not really fitting my theme.

I'm actually surprised I didn't know more about this story, given that this is at least the sixth time John Willard's 1922 play has gone before the camera, including a 1939 version starring Bob Hope. And as this play surely inspired numerous other similar stories we have seen, from Clue to Knives Out, its details felt instantly familiar to me.

The story is basically this. A rich British man named Cyrus West dies in 1914, and because of the presence of greedy relatives who want to get their hands on his fortune, he leaves instructions to delay the reading of his will until 20 years after this death. Those greedy relatives are just as money hungry two decades later, so six of them appear to lay claim to his fortune, apparently knowing that only one of them may be named.

They'll find out who that is via a film Cyrus made before dying, in which he will reveal the heir over the course of a dinner with the gathered family. That's right, he's left instructions with his loyal housekeeper to prepare the same dinner for them that she prepared for him when he was making the film, so that the screen on which the film is projected could be set up at the far end of the table, allowing him to "join" them in the meal from beyond the grave. He's even drinking the same wine, though he notes it's too fresh for him to truly enjoy at the time. It'll be perfectly aged 20 years later.

The twist is that there is a second film that's to be shown if the conditions of the first film cannot be met, which is that the heir needs to live through the night without being declared insane to claim his or her fortune. And since insanity runs in their family, this outcome cannot be guaranteed. A second heir will be revealed, if needed, in the second film; if the conditions of the first film are met, though, the second film is to be destroyed unwatched.

This is a lovely premise for a film. Of course, in its finer details, it is also complete bullshit.

Which, as we know, is a good 15 years before the technology of the time was able to marry sound and image.

The first film to ever have sound was 1927's The Jazz Singer, as audiences gaped in amazement when Al Jolson opened his mouth and a song came out. Even that film mostly has on screen titles, though, as Hollywood was not yet capable of making a complete film in which sound was synchronized to the images.

The Cat and the Canary, on the other hand, posits that this technological advancement might have existed around the same time that the Titanic sank.

Not only that the technology might exist, but that Cyrus West would be so comfortable with it as to use it in really clever ways. For example, he pauses in spots to give his potential heirs a chance to respond to something he's said, for each other's benefit if not for his own. He's also envisioned exactly how the table might be set up and even when and where his loyal housekeeper should walk in order to "disappear" into the side of the film as she goes to do something for him, and "reappear" out the other end at just the precise moment to create the illusion of the same person becoming 20 years younger before returning to her current age. (This trick was probably my favorite part of the whole movie.)

Now, because the play dates back to 1922, the filmed will is obviously not original to the source material. Whether it appeared in any previous version I cannot say for sure, though the Wikipedia plot descriptions do not suggest it.

The filmed will is undeniably a good way to modernize the story, as it allows West to be a character in the film -- a pretty cheeky one at that, who openly loathes his avaricious relatives. Why then, I wonder, didn't they just push the story forward 20 years? Have him die in 1934 and have the will reading in 1954? Sure, you have to sacrifice some of the 1934 design details of the story's present day, but to be honest, the way the characters relate to each other feels pretty anachronistic for 1934 anyway. Besides, the story is set entirely within West's mansion, a holdover of an older time, so whether it's actually 1934 or 1954 makes no difference in that respect.

The ultimate answer, though, is that it just didn't matter to the filmmakers that the film contains a glaring anachronism. Films are rarely meant to be confused for the real world, perhaps most especially in a melodramatic genre like the murder mystery. Who cares if the technology is ahead of its time?

The Cat and the Canary does contain a sort of awareness of the anachronism, whether for better or for worse. At one point in both of his will films -- spoiler alert, the second one does get watched -- he declares his will in written form by holding up poster boards, which are about the size of the cue cards that would have been used on live television. He does this as a precaution in case of "sound failure."

Or maybe in the case of sound not yet existing?

Posted by Derek Armstrong at 9:22 AM

Labels: the cat and the canary