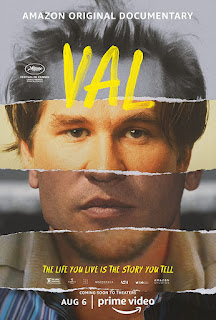 According to IMDB, there are exactly two feature-length films in history with the title Val.

(There's arguably a third that came out in 2008, but Val is only the a.k.a. title. The more common title is The Wave.)

How annoying must that be for Val Kilmer?

I watched Kilmer's Val, directed by Ting Poo and Leo Scott, on Tuesday night, as the seventh in my informal series of watching a documentary every alternate Tuesday. It's "informal" in that I don't write about most of them here on the blog, but otherwise it's quite forma, as in, I have not yet missed an alternate Tuesday since I resolved to do this back on August 3rd. (Three days before Val was released to Amazon Prime, in fact.)

I really liked the film. I had been worried it might be a vanity project for Kilmer, an actor who came of age on screen during my own years as a budding movie fan, and would rightly be considered as one of my generation's cherished icons. I never felt any particular affection for the guy -- I think I always felt there was something a little doofy about him. That analysis made me roll my eyes a bit when I heard there was a collection of Kilmer's videos over the years that had been compiled into a documentary feature.

What I didn't realize, or forgot if I had known it, is that Val Kilmer's current state is entirely free from vanity. His last six years have been marked by a struggle with and recovery from throat cancer, which resulted in two tracheotomies and an inability to speak except by plugging the hole in his neck and releasing that robotic sound in which the words can scarcely be recognized. If you listen closely you can hear what he's saying, but the film helpfully provides subtitles to make that much easier. According to Wikipedia, his voice has apparently been recreated this year using AI based on archival samples of his voice, but that has not yet happened in the timeline of Val.

In fact, the Val of Val is quite a figure of pity. Having gained and lost fortunes over the years, he had been on his way out as an actor even before he lost his voice, and one suspects he's not likely to go in front of a camera for a paying gig any time soon. Val shows him signing autographs at Comic-Con and living a lifestyle significantly reduced from what he had been accustomed to.

I think I gained a new appreciation of Kilmer in this film. The four decades of footage he had shot at various stages of his life is a really colorful way of assembling that life and giving us a clearer picture of it. However much I personally may have enjoyed him -- and to be sure, I periodically did -- he had an extremely diverse and interesting career in which he played multiple major icons, from Jim Morrison to Doc Holliday to Batman. And off screen, as I learned, he also played Mark Twain in a one-man stage show that the film characterizes as the realization of a career-long desire. It was also the last role he was playing before he got sick.

And so I now also have additional sympathy for Kilmer, learning that there is another film released in 2021 called Val. 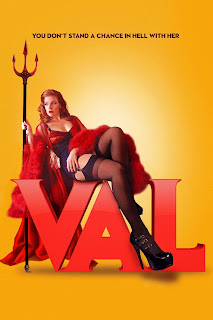 This Val is directed by Aaron Fradkin and stars Misha Reeves, with the logline "A criminal on the run breaks into the home of a high-class escort, only to realize nothing is as it seems." It only dropped earlier this month, as IMDB says it had a "theatrical" release on October 1st, though that seems doubtful to me. October 5th is listed as the next release date, with a November 9th BluRay premiere.

Assuming you don't have an extremely specific title like Eternal Sunshine of the Spotless Mind, there's a decent chance your movie title has been used by someone else in the past or will be used by someone else in the future. Because the commercial appeal of the title is usually of paramount importance -- your Eternal Sunshines notwithstanding -- you're willing to make the sacrifice, knowing that the year in parentheses after the title will differentiate yours from others who went the same route.

That's not possible with Val, both of which will have the release year 2021. This may actually be more annoying for Fradkin and Reeves than it is for Kilmer. By having the far more prominent Val, Kilmer will probably know that his title does not require clarification, and that his collection of home movies will be the first thing most people think of when hearing the title. But it's got to be really annoying for the makers of the smaller film, who will have to keep saying "No, not the one about Val Kilmer."

Maybe it couldn't have been avoided. Kilmer's Val wasn't one of those movies delayed by the pandemic, at least as far as I can tell. IMDB shows it having a premiere at Cannes in July, at which point Fradkin's Val would have basically been done and dusted. I mean, maybe there's a way to cross-check films in production to figure out if your title is in use, but I kind of doubt it. A forehead slap was probably their only available reaction at the time.

The coincidences don't end there.

When two movies have the same title in the same year, IMDB differentiates them by a roman numeral after the title, as in Val (I) (2021). In fact, roman numerals come in quite handy on IMDB for people with the same name, and given the millions of names in the database, the roman numerals can sometimes rise up into the twenties. (Much higher than that, actually. When I looked up the name John Smith just now, one of the most prominent matches had the number CCLXXII after it. I had to google it to be sure, but that translates to 272.) 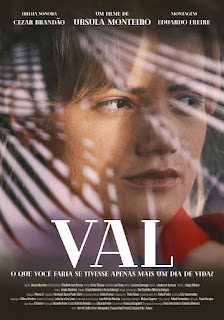 Fortunately, Ursula Monteiro's Val is a short, meaning hopefully both Kilmer and Fradkin can rest easy ... even if Fradkin may get a serious case of roman numeral envy.

Posted by Derek Armstrong at 8:49 AM