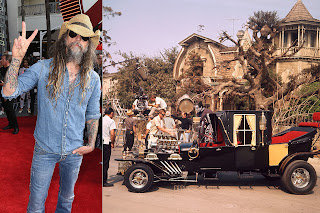 No, I'm not going to rip on James Gunn again today -- I am only going to refer to past instances of me ripping on him.

And this time it's got a Halloween theme of sorts, at least.

It seems like every couple months I have to come on here and whinge (to use the Australian word) about MovieWeb and the twice- or thrice-weekly emails it sends me compiling the latest "stories" written for the site. I put "stories" in quotation marks because my biggest complaint about these "articles" is that they are about stupid things like casting speculations that are based in no reality except maybe something some fan tweeted, or some random thing some actor said they would "love to do." Because he's so active on Twitter and loves talking about himself, James Gunn has appeared in an inordinate number of these MovieWeb stories over the years.

Lately, though, it's Rob Zombie getting all the attention.

If you didn't know, Zombie is making a version of The Munsters. I know because MovieWeb has mentioned it ... (pauses to count) ... 137 times.

6/19/21: "The Munsters Movie: Rob Zombie and Butch Patrick Celebrate with a Ride in the Koach"

7/15/21: "Rob Zombie is Building an Exact Replica of The Munsters House for his Movie"

7/22/21: "All of Mockingbird Lane is Being Built for The Munsters, Rob Zombie Shares His Plans"

9/25/21: "The Munsters Mockingbird Lane Lives Again Thanks to Rob Zombie"

Not 137. But 11 different times in the past four months and change, including two different "articles" on the same day back on July 24th. For a movie that does not even have a possible release date listed on IMDB.

Posted by Derek Armstrong at 1:59 PM