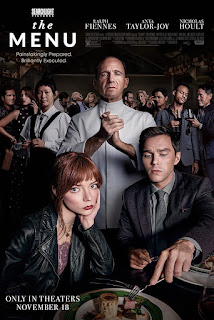 I wrote my first (and so far only) post about a casting director six years ago when I finally acquainted myself with the credits of Avy Kaufman, and learned that she was a woman, not a man. You can read the post here, if you like.

At the time, I didn't know any other casting director by name, and speculated that Kaufman's 223 credits on IMDB must be among the most for any working professional.

Mary Vernieu took that as a personal insult.

And then she took it as a challenge.

I haven't seen Kaufman's name so much recently, but I've seen Vernieu's everywhere. In fact, three of the last five films I've watched were cast by Mary Vernieu, those being The Menu, The Whale and Violent Night. She must regret having been too young to cast Stephen Frears' Hero in 1992, and she was probably never going to work with Claire Denis (Stars at Noon). But the way Vernieu works it could have easily been 5-for-my-last-5. (And John Leguizamo is in two of those movies, so I guess she digs him.)

Those three films bring her total number of credits to ... 425.

(IMDB has started dividing credits by past and future, in case you haven't noticed.)

Kaufman has accumulated her share of credits since I wrote that post in 2016, but that still brings her total to only a "paltry" 294, with seven more yet to release. While she celebrates passing the hallowed 300-credit mark in the near future, Vernieu is well on her way to 500.

I think she deserves a picture, just as Kaufman got in that post: Vernieu makes an especially interesting point of comparison with Kaufman because of the nearly identical duration of their careers. She's had a little longer to accumulate these credits than Kaufman, but not much. Vernieu's first casting credit was in 1993, while Kaufman didn't get her first until 1995. But Vernieu only had a total of three credits in 1993 and 1994 before getting five in 1995 ... and never looking back.

Do they have an actual rivalry? If they don't, they should.

Unfortunately for Kaufman, Vernieu seems to be the champion in most respects. Not only does she have a greater number of overall credits, but she blows Kaufman's best year (19 in 2014) out of the water, having eclipsed 20 credits more than a half-dozen times, with a personal best of 26 in both 2017 and 2019. That includes TV as well, of course, but then Kaufman's credits also include TV.

So I guess the question is: Why didn't I notice her name before the last year or two?

Hard to say. The first name Avy is more distinctive than the first name Mary. Maybe that's it. Remember, the last post was inspired by thinking Kaufman was a man before realizing she was a woman. I'd obviously built up a little narrative in my head about Avy Kaufman.

The narrative about Mary Vernieu is just that she's one of the most dominant forces ever in casting.

Of course, if I researched it further I might find that Vernieu's 425 credits are "nothing." I wouldn't be surprised to discover that in the 1940s and 50s, there were only two casting directors in Hollywood and they both had 800 credits over the course of their careers.

But I don't like research, and I'm not going to take that crown from Vernieu after I've only just handed it to her.

Posted by Derek Armstrong at 9:01 AM