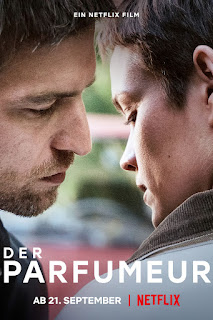 If you've been reading this blog you likely know my affection for Tom Tykwer's 2006 film Perfume: The Story of a Murderer. This will be the eighth time I've tagged the movie on this blog, which is pretty high for a movie that isn't Star Wars or some other cultural touchstone that comes up for discussion on a regular basis.

So when I heard that Netflix was streaming another take on Patrick Suskind's 1985 novel that was adapted into Tykwer's film, of course I had to make it a priority.

If this poster is accurate, it actually came to Netflix more than two months ago, but I only just heard about it this week, it being a German language film and not highly promoted. A friend on Facebook had posted about seeing it, and about how much she had loved Tykwer's film -- which gave me all the feels, since I was the one who first recommended it to her as part of a movie challenge.

Well I can see why Netflix didn't promote it. It wasn't very good.

The Perfumier is not an adaptation of Suskind's novel, which was set in 18th century France. Rather, the film is billed as "Based on thematic elements of the novel Perfume by Patrick Suskind."

True enough, if you were familiar with the novel, you could not watch this movie and escape noticing that the ideas discussed -- murdering women to extract their scent, creating perfumes that overpower people into loving other people, people who have no sense of smell or give off no smell -- are straight out of Suskind's novel. To not credit him would have probably resulted in a lawsuit.

However, the story is really pretty different from that in the novel. It's not just a 21st century update set in Germany and in the world of a police procedural. The protagonist is a cop rather than the perfumer (or perfumier), there are other sorts of olfactory potions that Suskind never wrote about, and the perfumer has an accomplice who makes no appearance in Suskind's text. Enough is different that they might almost have gotten away with not crediting Suskind. (Making that more difficult would have been the line of voiceover at the beginning that drives home not only the similarity the novel, but to Tykwer's film, as the narrator says "This is also the story of a murderer.")

Given that he clearly has an intellectual ownership over this material on some level -- and that this film clearly shows the potentially widespread application of that material's themes -- it made me wonder if it wouldn't be possible to construct an entire cinematic universe out of Suskind's IP.

Just think about the sort of other movies you could make:

1) A gifted scent maker who concocts specific smells to use as weapons. If he's being chased by someone, for example, he throws a capsule that releases an overpowering shit or vomit smell at their feet, and they double over wretching. It would be kind of like that character in Trey Parker and Matt Stone's Orgazmo who has a gun that makes people instantly ejaculate when they are hit with it, only far less pleasant.

2) The story of a mute man and his blind father, where a con man kills and captures the scent of the mute man, dousing himself with it to fool the blind father into thinking it's his son, then proceeding to bilk him out of all his money. (I guess it wouldn't really work to have a mute son and a blind father. Communicating only by touch is difficult. Maybe the con man would have to also get plastic surgery to really pull it off.)

Okay it's clear I don't have all the ideas. I'm not a screenwriter.

But the point is that there's a high concept here that has multiple potential applications. Maybe it would work better with short films, like The Animatrix, that anthology film that came out a month after The Matrix Reloaded and whetted our appetites for The Matrix Revolutions.

Or I could be making entirely too much out of a random filmmaker who had a single variation on Suskind's novel, and not a very good one at that.

Then again, why does The Audient exist if not to make too much out of things?

Posted by Derek Armstrong at 7:51 AM

Labels: perfume: the story of a murderer, the perfumier