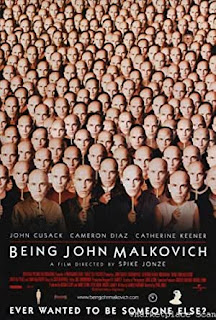 This is the first in my 2021 bi-monthly series revisiting the works of Charlie Kaufman.

I sometimes forget that Being John Malkovich is Charlie Kaufman's first produced screenplay. It's not like every introduction of a brazen new talent has to feel like a rough draft, something that gives a hint of the person's potential but has more flaws than home runs. But rarely do we see a first feature script come in as fully formed as this one.

In fact, for most of the time I've known about Kaufman, I thought his first film was Human Nature. We'll discuss that when I rewatch it in March, but that seems more like a typical first script, the one that comes in promising but misshapen. At the time I saw it, in 2003, it felt like that first work by an artist you go back and consume after he or she has broken out. The fact that I entirely missed it when it was released in theaters in 2001 gives a sense of its low profile relative to Malkovich, and explains why I persisted to think of it as his first until recently.

But I'm getting ahead of myself. We're here to talk about Kaufman's actual first, which in many careers might still be his best, except that Kaufman keeps on getting better.

The fact that it was also Spike Jonze's first feature is further astonishing. As much as this is a writer's movie at its core, it benefits immeasurably from Jonze's eye behind the camera.

This was at least my third time watching Being John Malkovich, which includes the first time in the theater and a revisit in November of 2012. I suspect there could have been a second viewing between 1999 and 2006, but I didn't keep track of rewatches until 2006 so that's only speculation based on the likelihood that it wouldn't have taken me 13 years to return to this fascinating and confounding work. Especially since it was my #6 movie of 1999, a cinematic year I continue to think of as one of the best of my lifetime.

In this series I said I wanted to discuss how each film relates in some way to I'm Thinking of Ending Things, but if I keep my focus that narrow, it may be a bit limiting -- especially since I've given my #1 of 2020 a lot of love on this site recently, if not actual in-depth discussions. What I really meant that I'd be doing is having a general discussion of the themes Kaufman has continued to revisit, which have culminated in his most recent masterwork. We'll find our way there and I think it should be interesting.

If you go nine years without seeing a movie, its details have a chance to get a bit fuzzy, so there were a number of surprises to me on this rewatch. One was how much there is about transgender issues, which -- in one of a few signs of the era in which it was created -- Cameron Diaz' Lotte refer to as being a "transsexual." I can't remember when that word went out of date, but we haven't been using it for some time now. Also retired: Characters who label other characters "fags." One of the abrasive elements of Catherine Keener's great Maxine is that she asks John Cusack's Craig if he is a "fag" because he does not treat her as a sexual object. Though of course as with anything with her, it's mostly done for trolling purposes. (We wouldn't have known what a troll was back then either.)

But back to the transgender stuff. It reminded me how Kaufman once wanted to make a movie called Frank or Francis, whose plot details were not really known, but it was highly suspected to relate to issues of gender identity, as the title might suggest. Er, wait a minute -- I just realized that I always read that title as Frank or Frances, which would suggest a person with gender uncertainty issues, while Frank or Francis would just be two different variations of the same male name. I guess I will leave this paragraph in even though it now makes no sense. Anyway, I always had it in my head that Kaufman was interested in gender non-conformity and I always thought Frank or Francis [sic] might be his modern version of Ed Wood's Glen or Glenda. I better move on.

Still, I think Kaufman explores in other films the gender divide that Lotte wants to cross here. It's of course present in I'm Thinking of Ending Things, where it is highly assumed by the end that a man (the elderly janitor) has assumed the subjectivity of a woman (the character played by Jessie Buckley), even though the truer version of himself also appears in that car (the character played by Jesse Plemons). It's all over the place in Malkovich, as Lotte talks about the portal into Malkovich's brain being kind of like his vagina. There's also of course the "Malkovich Malkovich?" scene with all the female Malkoviches, including the first one with the very ample bosom.

One constant in Kaufman films is the actual surrogate for himself, a depressed schlub who has no self esteem and nothing to offer anybody, or so he thinks. I found it interesting to note that even in its very first on-screen incarnation, this character is viewed by Kaufman as despicable and incapable of redemption. Cusack's Craig is really difficult for the audience to cheer on, only approaching that on a couple occasions by sheer dint of his timidity. But Craig is more monstrous than pitiable -- he labels himself a monster at one point, and tries for that redemption by saying he doesn't want to be a monster. But in this very moment, he proves his own monstrosity but locking Lotte back in the cage and duct-taping her mouth when he reverts to his jealousy over her connection to Maxine.

Craig's puppetry is the first appearance of Kaufman's career-long interest in metaphors for filmmaking, which have their more literal incarnations (Adaptation) as well as more abstract incarnations (Synecdoche, New York). I was disappointed in a line of dialogue that put too fine a point on a connection we were surely making for ourselves, the connection between Craig's career dreams and what he's actually doing in Malkovich's body. Near the mid-point he tells Lotte "It's just a matter of time before Malkovich is just another puppet hanging next to my workbench." Over time Kaufman would come to trust us to make these associations ourselves.

The other big connection I wanted to make to Kaufman's other films was the first appearance of characters traveling through an environment that exists only mentally, when we see Lotte chase Maxine through Malkovich's subconscious. It's essentially this same set piece that occurs throughout Eternal Sunshine of the Spotless Mind as Joel and Clementine wade through Joel's memories. And this could really be the entirety of I'm Thinking of Ending Things.

There's probably a lot more I could write about this movie when comparing it to other Kaufman works, but it occurs to me that I don't want to steal the thunder of those discussions when they happen later on. So I'll just end with some individual moments I loved and wanted to call attention to.

- The bit where Malkovich emerges from the portal next to the New Jersey Turnpike, and moments later someone throws a crumpled up soda can that hits him in the back of the head, saying "Hey, Malkovich, think fast!" I love the idea that a motorist driving by at a high speed in the dark a) can identify that this as Malkovich, b) thinks nothing of the fact that he's walking by the side of the highway, and b) decides quickly enough that he's got some beef with the actor that warrants throwing an object at him.

- Moments later, when Malkovich tells Craig he'll see him in court. As if this situation might be properly adjudicated in a court of law or has anything to do with normal jurisprudence.

- The Mary Kay Place speech impediment bit, and how Orson Bean persists in the notion that it's his own problem rather than hers. Incidentally, this is the third time I've seen Place in a movie in the past month, after she appeared in both Music and The Prom.

- Anything related to Charlie Sheen.

- The film's commentary on how dumb men are when it comes to romance and sex. Lotte and Maxine make plans to meet in Malkovich because Maxine basically knows without any question that she can find him and lure him into the bedroom based on nothing more than her own will to do it.

- The scene of the monkey flashing back to his own capture. Perfectly random and wonderful.

- The puppetry stuff is amazing and beautiful. I found myself wondering if this is actual puppetry that a real puppeteer could manage by orchestrating a precise order of string movements, or whether it is intentionally outside the bounds of reality, and if so, what commentary Kaufman might be making with that.

- Octavia Spencer is in this! She is credited as Octavia L. Spencer.

- I love the backstory of why there was a half-story built into the Mertin-Flemmer building. In the hilarious and grainy video recreation of the story, the old sea captain (I can't remember whether it's Mertin or Flemmer) says, as he's falling in love with the little person woman who inspired this unique bit of architecture, he wants to create a place "for you and all your accursed kind." I laughed out loud, I think just because of the disconnect between loving someone and referring to their kind as "accursed."

- The number of times I laughed out loud during the movie, in general. Every movie Kaufman has written is loosely described as a "comedy," but in my mind I don't think of his movies as being funny in that way -- though I did laugh a number of times in I'm Thinking of Ending Things as well, one of his most consciously dire films.

- As I was watching I noted a similarity between this and Get Out in terms of its idea of one soul hijacking another and fighting for control of the body. I'm not the first one to make that comparison. I found out afterward that a whole fan theory has been put forward that suggests that Get Out is a spiritual sequel to Being John Malkovich, especially since Catherine Keener appears in both films -- the idea is that her character in Jordan Peele's film could actually be Maxine after learning to control this process of body swapping. Peele has given his endorsement to the theory -- after the fact, not claiming it was in his mind when he made Get Out, though he is on record as being a huge fan of Jonze and Kaufman's film.

Okay that's probably enough for now. Back in March with Human Nature.

Posted by Derek Armstrong at 7:57 AM