Knowing Noir: In a Lonely Place 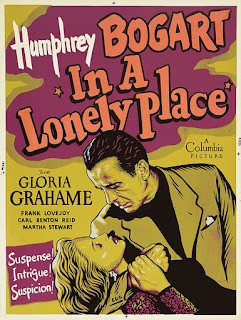 This is the first in my 2021 monthly series watching film noir that I haven't yet seen.

Well, it looks like there's no easy cure for my negative feelings toward Humphrey Bogart.

Not that any one movie would ever represent a last, best hope to fall for an actor, if you still have other of their movies yet to see. But In a Lonely Place was definitely the most prominent Bogart role I had yet to see, and it didn't change my thoughts on him one iota.

You may recall that In a Lonely Place was kind of the inspiration for this series, in that it was the most-discussed noir (in my circles, anyway) that I had not yet seen, and also gave me a chance to interrogate my feelings about Bogart. I figured the widespread critical acclaim for the film would win me over on some level.

I'm going to spoil some things about In a Lonely Place, so read on only at your peril.

The film is maybe an imperfect place to start for this series as it does not feature the biggest noir tropes, namely, that the lead character is a detective of some kind -- either private or public. But it's certainly classified as a noir, though the femme fatale in this case more needs to look out for the main character killing her than vice versa.

Bogart plays a screenwriter, Dixon Steele (I could never get used to the nickname "Dix"), who is angry. Why is he angry? The film isn't really sure. He went to World War II. That he hasn't had a hit movie since then certainly contributes to his mental state. But the film only mentions that in passing a couple times and does not really stick to it as a psychological explanation for Steele's antisocial behavior.

Which he displays from the start, and rarely takes a break from. And so he immediately became associated with what I haven't liked about other Humphrey Bogart characters -- a kind of derisive superiority, a sense of being cool and above the fray.

Steele gets accused of murder after the girl he went home with one night -- because he's lazy and wants her to give a summary of a particular book he's adapting, rather than reading it himself -- turns up murdered. Seems like quite the coincidence as Steele really did have nothing to do with it, we find out by the end. But he shows so little concern over the fact that she's been killed -- preferring to mock and tease the police officers who are questioning him -- that his guilt seems almost like a certainty. He doesn't protest his innocence and he doesn't seem very distburbed that a woman he was with (not romantically, but still with) was killed within an hour of her leaving his house.

I thought immediately of a very different type of movie, A Cry in the Dark, the Meryl Streep movie that many people will know of as "The dingo ate my baby!," because that's the famous line from that movie. The reason the chracter Streep plays, Lindy Chamberlain, was suspected of having killed her own child in real life was that she did not seem to be sufficiently shaken by the baby's disappearance in interviews after the fact. People figured she had to be hiding something because no one shows that kind of sociopathic remove from something so awful that has happened to themselves. (I'll alternate the words "sociopath" and "psychopath" in this piece because I can't be bothered to remind myself of the difference between them right now.)

That's how I felt about Dixon Steele. Instead of getting a horrified look in this eyes when he's informed that Mildred Atkinson has been killed, he's mostly like "Yeah, so? What does that got to do with me?" It may not be the response of a guilty person, but at the very least it is the response of a heartless one. And indeed, this does intimately have to do with him, as he is a primary suspect.

So why is Steele heartless? We don't know. Because he's a jerk? Because he has a violent temperament? And because these things are true, why does his neighbor, Laurel Grey (Gloria Grahame), fall for him? She says she likes his face, but that's just flattery to Bogart, who has a face like an old catcher's mitt. Because we can't actually believe that Laurel loves him -- the film doesn't do the work to convince us of this -- the whole thing just comes off as unbelievable.

In a Lonely Place is staged as a tragedy, in that it thinks it is a tragedy. Near the end, when we finally learn that Steele is innocent, but because things have irreparably fallen apart between Laurel and him, she says "That information would have meant so much to us just 24 hours ago," as sorrowful strings play on the score. (This film's score is far more heavy handed than I would anticipated.) If that is not a line of dialogue from a tragedy, I don't know what is. I'm not sure why Steele was any better of a match for her 24 hours ago.

But here's the thing about tragedies. A film is considered a tragedy if a character has a flaw that prevents him or her from realizing dreams that are easily within grasp. That's called a "tragic flaw," of course. It afflicts basically good characters that the audience is clearly rooting for, who have just ... one ... thing ... that gets in the way of a happy ending.

This does not describe Dixon Steele. He's all flaw, so there's nothing tragic about it. He's a mean, grumpy SOB who wants to strangle Laurel in every other scene, who is only prevented from bashing in the brains of an innocent motorist with a rock because Laurel stops him just before he does it. I mean, what kind of sociopath, what kind of psychopath, is pushed to the brink of murder because his own crazy driving causes a collision? Not a sociopath or psychopath I can root for, I can assure you of that.

If we want to look at characters with tragic flaws within Bogart's own career, we need go no further than my favorite Bogart film, a film I genuinely love, and also the only time I'm sure I loved what Bogart brought to a film. That's Treasure of the Sierra Madre. Bogart's Fred C. Dobbs is a character we like, a character we want to see make good on his quest for gold. But Dobbs has a tragic flaw in that he becomes paranoid and cannot trust those who have accompanied him on his quest. It leads to his undoing, and that does, indeed, feel like a tragedy.

The tragedy here is that Dixon Steele has been so poorly developed as a character that we have no idea why he is the way he is. "The war" feels like a pat answer, mostly because the screenplay doesn't do the work to support this theory. It may be a darker and more insidious commentary about the male psyche and about Hollywood, but those don't really land with me either -- not because they might not be true, but because the film does not provide the evidence of its perspective. We would have to go to extra-textual information about Hollywood at the time (the red scare, the broken personal lives of some of the cast and crew) to find our meaning in the film, and that meaning does not exist for me in 2021.

I'm wondering if I should have finished this series with In a Lonely Place rather than starting with it. After all, if I really wanted to change my thoughts on Bogart based on deciding whether I like noir over the course of a 12-month viewing series, wouldn't it be better to watch a bunch of other noirs first? I doubt it would change my opinion of this film, but there's a chance it could have.

Now that I've done it, though, there's no going back. So the best I can do is bookend this series with Bogart films. Fortunately, I've got a number of other choices for Bogart noirs I haven't seen. I'll watch one of them in December.

In the meantime, it'll be on to a non-Bogart film in February, though what that will be I haven't yet decided. Leaning toward Gun Crazy, if you want to watch along with me, but don't hold me to it.

Posted by Derek Armstrong at 7:56 AM