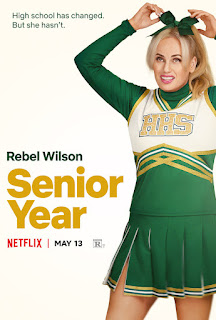 It's appropriate that the new Netflix comedy Senior Year is about a woman who awakens from a 20-year coma to find a world of very different technologies and social morays. In 2002, when the woman (played by Rebel Wilson) had her cheerleading mishap that led to a coma, it was a totally acceptable -- nay, rewarded -- pursuit to vie for the frequently interrelated titles of cheerleading captain and prom queen. Today, most teenagers desire to become neither, recognizing the shortcomings of both aspirations while being insufferably shallow anyway in their own modern, social media-influenced ways.

It's appropriate because in 2002, a critic -- possibly even me as a critic, because I was one then -- would have written about Wilson's significant weight loss in my review. It wouldn't have seemed possible not to write about it, simply because you have to acknowledge the elephant in the room -- and no, that's not a fat joke.

Today, not so much.

Oh, I thought about it. It seems like a legitimate talking point about the movie. I don't know how much weight Wilson has lost, but enough to make her a candidate to play the role she's playing, when she never would have been one in the past. Googling to find out how much weight she lost is on the wrong side of the line that I'm looking at today, and besides, it may be even more now than it was at the time of filming.

But I knew there was no way to talk about it without it becoming inadvertent body shaming at best, a prurient fixation on the physical attractiveness of actresses at worst. That's the era we live in today, and though a person usually would accompany such words with a critical shake of the head, it is undoubtedly a good thing that we can't get away with this sort of thing anymore. So instead of in my review, I just talk about it on my blog, right?

I do think it's a newsworthy consideration. Actors make their name with one particular sort of appearance, and if they're making a name at all, it means that appearance works for them. Chris Farley wouldn't have been Chris Farley at half the weight, and whether or not she aspired to this, Wilson was sort of in the same boat. Her larger than life personality went with a body that was larger than your typical Hollywood body, and there was never any doubt that there was a physical aspect to what made her funny. Fortunately in Wilson's case we were laughing with her, not at her.

But life in the spotlight is hard, and people on the internet are cruel. Who knows how many times Wilson had to read that she was fat, or pretend to deflect comments from casting directors about what roles she was suited to play, as if they didn't cut her deeply. So she did lose the weight, and though we still remember the way her personality was sort of an accompaniment to the size she was when we first met her, she's pulling it off.

I think it's newsworthy because a change in the sort of roles a person can play is a not-irrelevant form of engaging with their body of work, which we do in a review. And most critics will know that it can be useful to have a real-world opening paragraph to a film review, to orient the viewer before delving into specifics about the film in question. The temptation was there to at least mention in passing her weight loss.

Instead I talked about the roles Wilson was suited to play in a different context -- those based on a personality so specific and so heavy on shtick that they undermined her candidacy for a lot of realistic roles in realistic films. Fortunately, that doesn't really describe Senior Year, which doesn't mean it's not effective -- which it is, as you'll see if you read my review.

It's something a woke critic should learn to do if he or she doesn't already. While changes in physical appearance -- which also include things like plastic surgery -- do feel relevant to the assessment of an artistic work, especially if a new artificiality prevents you from relating to the character as a real human being, you're so much better off just letting it go. It's more fair to the performer and you'll feel better about yourself in the morning.

But it does require shutting off those instincts. Especially if we don't know what to write about a movie -- which was not a problem for me with Senior Year -- we tend to lean toward surface-level observations that don't necessarily improve the review, but at least maybe get you going in your writing. We're better off if we resist this though. For example, in 2022, no one wants to hear a critic -- particularly a white male critic -- incorporating the physical attractiveness of an actress into the text of a review, in the same way that people don't need to hear about race from that critic just because a film happens to feature minority characters.

And so it is with plastic surgery, and especially with weight loss. It may be an interesting thing to observe in your own mind, and you may feel like mentioning it is a way of congratulating the person on something that must have been very hard.

But it probably doesn't have a place in a review.

If you must acknowledge that elephant in the room, at least save it for your blog.

Posted by Derek Armstrong at 9:27 AM