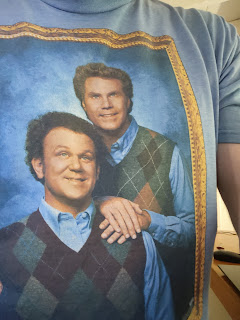 The vast majority of the time I wear this shirt is, of course, in Australia. Where it goes uncommented on for months and months of semi-regular wearing.

I have, unsurprisingly, worn it more regularly on this trip to America, since you tend to wear the small number of t-shirts you brought with you, especially on a trip that takes place during summer, about once every five days. Assuming you also regularly encounter the means to launder them.

When I wear this shirt, two hours never pass without a comment from someone who loves this movie.

If I thought it was just an Indiana or a New England thing, yesterday's wearing during our second day cleaning out our house disabused me of that notion. Our first stop of the day was 7-11, where, as I was buying my fourth cucumber lime Gatorade in the previous two days, the woman behind the counter told me how much she loved the movie.

America on the whole appears to love Step Brothers.

The movie is of course a personal favorite. My wife and I talk about how when we first saw it together at the drive-in in 2008, it was the hardest she had ever seen me laugh in the three-and-a-half years she had known me. She wondered if I might have been losing grip on my sanity. I have since seen it five more times and it's currently #119 on my Flickchart, which places it within my top 20 or possibly even top ten comedies of all time.

But I guess I still think of it as sort of "my" movie, and am surprised when I discover that other people share my affection. Maybe part of this phenomenon is that comedies have, on the whole, become significantly less funny since 2008, so much so that I have a hard time believing that anything as recent as that can rise to the level of a widely embraced classic. It's not just because you have to work a lot harder to make good comedy these days, due to the minefield of political sensitivities out there. Please don't interpret this as me saying "wokeness means you can no longer be funny," because I hate that opinion. But I don't think it's entirely a coincidence that I haven't laughed hysterically at a lot of comedies in recent years.

Step Brothers, though, is indeed viewed as a comedy classic -- at least by Americans. Especially on the day I wore it in Maine, I had no fewer than a half-dozen passers by and others I encountered comment on it. This is significant especially since I was not already having an interaction with those people. They just blurted out their affection for it to me, or in some cases, mentioned it only to whoever they were walking with, smiling and laughing appreciatively, though of course I could hear what they were saying.

I don't think it's that Australians don't like Step Brothers. I have certainly gotten comments on it in the past. But I do think Australians are less likely to give you their unsolicited opinion on something, good or bad. Just as they're less likely to randomly say hello to a stranger they are walking past. Australians are no less friendly than Americans -- and are certainly more friendly on average, since there tend to be fewer assholes -- but they save their friendliness until you are already engaged in some sort of interface with them.

Having had this experience of overwhelming support for the movie on this trip, I'm sure to pay a lot more attention to the sorts of reactions this t-shirt gets, or does not get, when I return to Australia. We'll be starting to head into warmer weather when I get back.

Only then will I have a better idea of whether there is something distinctly American about the appeal of Adam McKay's film, and even then, it'll be based only on circumstantial evidence.

Posted by Derek Armstrong at 1:09 AM