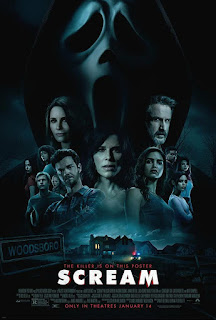 Whenever we used to fly east across the Pacific Ocean from Australia to the United States, the flight would leave in the morning Melbourne time. Not early morning, but like 11 a.m. This brought you in to Los Angeles at something like 8:30 a.m. on the same day, making for one very loooong day. All the movies I watched on the flight were part of this one day.

For some reason -- COVID? -- that's changed now. The flight leaves at night. Our flight was at 9 p.m., bringing us in to Los Angeles at 6:30 p.m. Which I thought would be fantastic, since we'd only have to stay up a few more hours before going to sleep -- theoretically getting on the new time zone that much faster.

Well, tell that to the worst jet lag I've ever had. After six nights in the United States, I've still only had full night sleeps with the assistance of a sleep aid, and even those were not always as effective as I expected them to me. There was one night -- the second night -- when I slept nary a wink. In fact, at about 4:30 I gave up trying and watched The Amazing Spider-Man, which I'd never seen, on Netflix.

But I'm not here today to talk about jet lag.

What, Vance? you say. That's impossible.

Au contraire mon frere. And the later departure time had everything to do with it.

As far as I can tell, though the internet has been anything but helpful on this, you cross the international dateline about six hours after leaving Melbourne. If you leave at 11 a.m., that means you cross at about 5 p.m. Melbourne time, effectively staying in the same date on which you left.

If you leave at 9 at night, though, that means it's about 3 a.m. the day after you left when you cross, before you jump back into the previous day. Whole different story in terms of assigning dates to my movies on my movie list.

Father Stu, the first film I watched on the flight, quite clearly belonged to Tuesday, July 26th, the day I left terra firma. But the second movie, the new reboot of Scream, was not quite so straightforward. If I didn't watch all of it before those six hours elapsed, I watched enough of it to count it toward whatever day it was for me that day. And since most of the viewing would have come between midnight and 3 a.m. Melbourne time, it was a Wednesday, July 27th viewing for all intents and purposes.

By the time I started Kimi, I had time warped back to Tuesday, which was also the day I watched The Duke. (And this answers my question about whether movies on the streamers would be available. Kimi is part of Steven Soderbergh's ongoing deal with HBO, so without this flight I might not have seen it. It's ended up being my favorite film I've seen since we left.)

Then on our next flight to Indianapolis, which was well and truly on American Wednesday after a night in an LAX hotel, I saw Marry Me and Sundown.

So this is how it looks in my "movie order" document:

So it's in chronological order, even if the dates are not.

Of course, this does not work on Letterboxd, the other place I record the order of my movie viewings. A movie on a later date cannot appear before a movie on an earlier date, for obvious reasons. So Scream comes after The Duke but before Marry Me on there.

And hey! This "crazy" phenomenon gave me the excuse to write my first post from this trip. There figure to be more.

Posted by Derek Armstrong at 8:32 AM