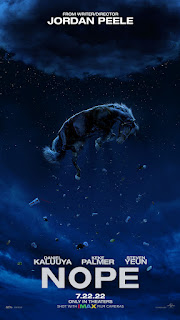 I was supposed to finally see my first movie in the theater on this trip last night. As the trip has already been going on 17 days, in the past it would be about my third. I would have insisted on seeing something in Massachusetts, or Maine, or both. Heck, I might have even driven out from the state park in which we were staying in Indiana for the family reunion way back on that first weekend. (There was a nearby town with a movie theater but I think it was only playing The Rise of Gru. And you know my thoughts on minions.)

I had to say "nope" to last night's 9:40 viewing of Nope for the following reasons:

1) I woke up at 4:30 a.m. That would have been 7:30 a.m. on the east coast, where I had awoken the previous morning, which is the time I normally get up, if not a half-hour before that. So while this didn't alarm me and get me worried about another round of jet lag (did I tell you I didn't sleep at all that first night in Indiana?), it did mean I was going to expire a lot sooner that night. Especially because ...

2) We spent all day working in 90 degree heat at our house in the valley. Yep, there was a lot of usable stuff to haul out the curb and unusable stuff to haul out to the junk pile, which we paid someone to come pick up. I went threw three large bottles of sugar free lime cucumber Gatorade. (Oh the things you can't get in Australia.) By about 4:30 I was just done. Especially because ...

3) I drank two large margaritas with dinner. After washing off as much of the grime and dust as we could manage in the sinks and water fountains at a local park -- the water is off at our house -- we reported to Casa Vega in Sherman Oaks, where we were amazed to find a table waiting for us even though we had no reservation. (It's a pretty popular spot.) We rewarded a day of labor with yummy Mexican and washed it down with tequila.

I did manage to say "yep" to Dave Made a Maze on Amazon, but it was only 81 minutes, as opposed to the two and a quarter hours of Nope. And there was napping. Pausing and napping, so I didn't miss anything, but napping nonetheless.

You can't nap at the theater, and besides, I want to be at peak awakeness for Jordan Peele's latest attempt to blow my mind. I still know nothing about it.

That won't happen tonight -- plans -- but could happen one of the next two nights after that.

The physical labor at our house should be less, and I shifted my awakening this morning to 6:30 -- a good start, both metaphorically and literally.

Posted by Derek Armstrong at 1:33 AM