Did I really need to keep all the ticket stubs? 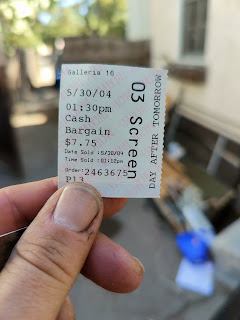 As we spent five days going through the belongings in our garage covered with nine years' worth of rat poop, there was not as much sifting through papers as you might expect. Oh, it's not that I didn't have the papers -- I am a notorious pack rat. It's that we determined that it was worth more to us to ship them and pay a little extra for their weight than reduce their number a likely meaningless amount. In the end, I probably could have taken more as the pod goes only on volume, not weight, and we had leftover volume.

There were a few times during the process, however, when I got rather granular, including when I went through one of those old corporate popcorn tins -- you know, the ones divided into three distinct flavors --  full of receipts and ticket stubs.

On a particular morning back at the house where we stayed in the Hollywood Hills, I plunged my arms elbow deep into this tin and resembled a bit of a sorting machine as I separated into a "keeping" pile and a "trashing" pile. Knowing how ridiculous this was in the first place, I went really fast -- which is what probably gave it the quality of a machine to an outside viewer. (And probably also made me look a bit insane to that viewer, as piles of curled ATM receipts and the like started to billow around my feet.)

As I was sifting and sorting, I ended up keeping all of my movie ticket stubs -- the ones I could identify while going at this rate of speed, in any case.

It's a good question. But there's no doubt we cinephiles like ticket stubs. We like evidence of having gone to the movies. We're reminded of the circumstances of those visits, and because we love movies so much we tend to have a natural collecting sort of mentality -- especially the list-makers among us.

And these stubs, unlike the ones back at my house in Australia, seem to have preserved all the details, like the one you see above. They've been out of the sunlight for nine years, and also, I think these tickets probably used longer enduring ink back then than they do now.

Am I ever going to do anything with these stubs?

If I were a bit more of a scrap booker -- as in, if I could ever find the time to commit to that sort of thing -- I could see myself putting them in that sort of album. But the completist in me doesn't really love that idea, because it would suggest to the casual reader that these were all the ticket stubs I had ever gotten, when we all know that at least 20 percent of them have been lost to the sands of time.

So in the meantime, I just squirrel them away wherever, waiting for some future theoretical project that will never arrive. And now I have maybe hundreds more to add to the existing quantity.

I did think the experience of cleaning this house out would be one of making tough decisions, of proving what an adult I am, capable of walking away from sentimental pieces of my history. And of course I did do that. I parted with a number of beloved objects, beloved not because they are actually emotionally valuable to me in any way, but just because I spent whole periods of my life where I saw them on a shelf on a daily basis. You can be sure I took pictures of those things before donating them or throwing them on the trash heap.

But the ticket stubs -- a perfect way to prove what an adult I am -- had the virtue of being very small and easy to ship/store. So the sorting machine kept as many of them as it could.

So if I want to look at them again, I'll have them to look at ... the day after tomorrow and beyond.

Posted by Derek Armstrong at 3:04 AM

Labels: the day after tomorrow