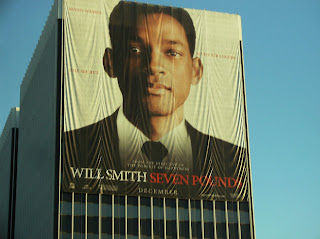 Note: Here's a little throwaway I've been meaning to post since last week, but never quite generated the necessary enthusiasm. Well, I'm babysitting a meeting of all my company's general managers to make sure there are no technical problems, and it's hard to get any work done, and the actual content of the meeting has no relevance to me, so it seems like a good time to bang this out before it loses its timeliness.

For about two months, up until last Friday, I drove past this monolithic visage of Will Smith every day on my way home from work. It's an advertisement for his widely panned prestige picture Seven Pounds, which was released just before Christmas -- though I swear that photo is at least ten years old, looking more like Smith looked in Six Degrees of Separation than now. Re-teaming with Gabriele Muccino, his director on the well-received The Pursuit of Happyness, was not a happy pursuit this time around.

However, I did get a certain enjoyment looking up at this massive incarnation of Mr. Smith. Covering two sides of the office building in question -- one directly facing the freeway, one facing the traffic that rides south to north on the 405 -- I felt like the former Fresh Prince was serving as the patron saint of highways, ensuring us all a safe and incident-free commute.

Sure, I consider Smith generally pleasant to look at. And it was really trippy seeing him during one of our winter windstorms, when the yards upon yards of fabric billowed like ocean waves. But more than that, something about the sheer massiveness itself was impressive, if only as an indicator of the ballsiness of modern advertisers. Especially since it remained up for a good month after it was clear people were not really interested in this film, which grossed only $70 million, Smith's lowest take since Ali in 2001. In fact, on the day it was taken down, the movie had slipped out of all but one theater within a 25-mile radius of my house.

This "hang it and forget it" mentality is not surprising considering the massive scope of the ad. Just eyeballing it, it appears to consume nearly ten floors of the building, and its entire width. And on two sides, at that. When you're dealing with something like that, you can't afford to switch it up every week, in accordance with the vicissitudes of the North American box office.

When first contemplating this ad -- not the only one of its kind in Los Angeles, but probably the largest -- I considered it the meeting point between the rising ambition of the advertising industry and the plummeting fortunes of the economy. The mission of dreaming up every more inescapable advertising seemed to align perfectly with the vacating of office buildings, necessitated by the economic collapse.

At least, I assumed the building that was home to the Seven Pounds ad was vacant. Had to be, right? I noticed that another building along the 405 began hosting such advertisements immediately after its prior tenant -- which employs one of my friends -- picked up and left. Besides, how can you hang an ad like this over occupied offices? Covering the windows as the Seven Pounds ad does, it necessarily blocks out some percentage of the light -- how much depends on what color the poster is where you're located.

Well, just recently I learned that's too much to assume. In fact, the increasing prevalence of these so-called "super-graphics" has inspired the city of Los Angeles to pass a three-month moratorium on all new outdoor advertising. I guess the city needs to revisit its own rules on outdoor advertising, having not legally anticipated the repercussions of ads like the Seven Pounds ad. In fact, I read a different article in which building tenants complained about the way the change in the sunlight affects their ability to function as a business. I should think so.

How much does this have to do with movies? Not much, I guess, now that I look back on it. But it does mean that come this spring, I probably shouldn't expect Zachary Quinto's Captain Spock to replace Will Smith as the next patron saint of highways.
Posted by Derek Armstrong at 5:40 AM