Not a great imagen 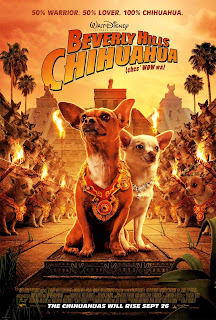 I was listening to the three-minute local news update this morning on the local NPR affiliate (KCRW) when I heard the following disturbing words:

Or something to that effect.

In fact, it's not "Imagine," as the reporter pronounced it. (And what kind of reporter working in L.A. doesn't check out his/her Spanish pronunciations before going on the air?) That's why I had a hard time later when I googled it. It's actually "Imagen," which is Spanish for "image," and pronounced ee-MAH-hen. So the Imagen Awards are not unlike the NAACP's Image Awards -- honoring positive portrayals of Latinos in popular culture, as the Image Awards honor positive portrayals of African-Americans.

I must start out here by saying that I did not actually see Beverly Hills Chihuahua. I've been content to use it as the butt of jokes -- as the example of some indefinable, terrible trend -- without actually vetting it to see if my perspective had any validity. And the review of the movie on my company's website was particularly generous to it.

But come on. A positive portrayal of Latinos in a movie about talking chihuahuas?

Of course, a movie like this could never be overtly racist. In fact, the likeliest thing would be to bend over backwards to avoid even a momentary appearance of racism. But I can't help but think that there's something inherently insensitive about a bunch of chihuahuas voiced by Latino actors and actresses. The same kind of insensitivity that some of us felt watching the chihuahua pitchdog for Taco Bell, as much as many of us loved that little lug, may he rest in peace.

But the Imagen Awards stumbled over themselves raining accolades on this movie. Just check out this list:

Please note that the best actress and supporting actress categories are curiously absent from the nominee list I saw, though they did appear for the television categories. Please also note that the only reason director Raja Gosnell was probably not nominated is because he is American, and has no apparent Latino heritage.

Please note, as well, that all of these acting nominations were for providing voices. To dogs.

Okay, okay, I know you've accused me of excessive sensitivity to racial issues before. So let me take a different tack.

Let's say Beverly Hills Chihuahua is not the slightest bit racist. I'm an optimistic guy, so it's easy for me to believe it really is quiet charitable to people of Latin descent. The fact that the movie received seven nominations -- and all the available nominations in the supporting actor category -- still indicates one or both of two things:

1) There are not many options for charitable representations of Latinos in the movies;

2) There are not many representations of Latinos in the movies, period.

Want proof? Let's look at some of the other nominees and their relative levels of obscurity. Let's start with Best Feature. Nothing Like the Holidays? Think I heard of it, but I may also be confusing it with last year's The Perfect Holiday -- a film with an all-African-American cast. Don't Let Me Drown? Sounds vaguely familiar, but only vaguely. Sleep Dealer? Heard of it, but only because I was captivated by its outdoor advertising campaign, which was far out of scale with the profile of the movie.

You go to the directing category, and it gets even more obscure, because the director him/herself has to be Latino. They are: Kenneth Castillo for The Drive-by Chronicles: Sidewayz, Georgina Riedel for How the Garcia Girls Spent Their Summer (Riedel must be her married name), Carlitos Ruiz for Maldeamores, and Alex Rivera for Sleep Dealer. (I guess we happened to perfectly hit a period of inactivity for Guilermo del Toro, Alfonso Cuaron, Rodrigo Garcia and Alejandro Gonzalez Inarritu).

And come to think of it, what criteria do they use to determine a film is sufficiently Latino to even qualify? When it comes to Beverly Hills Chihuahua, the director is American, the top-billed star (Drew Barrymore) is decidedly American, the producers are all American ... only the screenwriting duties fall to a Latina, Analisa LaBianco, though she has to split them with the decidedly American Jeff Bushell, who also gets the screen story credit.

Oh yeah, and a lot of Latinos appear in it. As talking chihuahuas.

I fully admit I may be half-cocked here. Hair-trigger racism bothers me as much as it does you, though the current post probably provides evidence to the contrary. And I certainly don't want to call into question either the methods or motives of a well-meaning award-giving body, which works tirelessly to strike down the stereotypes that keep us all shackled.

If Beverly Hills Chihuahua is the pinnacle of positivity, I'd like to see the negative portrayals.

Then again, maybe I wouldn't.
Posted by Derek Armstrong at 3:16 PM

Yeah, I'll comment on my own post. BHC did in fact win the best picture, and Manolo Cardona (the only acting nominee with whom I was not familiar) won the best supporting actor award. Someone from the film had to, as all the nominees came from that film. However, I am happy to say that Luis Guzman took best actor for Maldeamores, shutting out the three BHC nominees. Maybe that's something.

We've run into this hyper-sensitivity about racism in movies before (on this very blog actually), but don't you think that an organization dedicated to rewarding the Latino culture would be the first ones who would react to a racially insensitive movie?

Of course. And I'd really like to see it now -- I'm sure it is completely harmless. I guess my point (perhaps poorly made) is that it's a sad state of affairs when a movie about talking chihuahuas is the best there is for depictions of Latinos on film. I'd say at best it is a neutral depiction in a frivolous kids movie. When will we see something outright positive in a movie for adults?