Why don't you two just do it already? 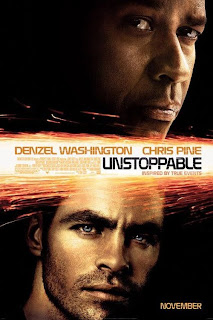 Those Scott boys love their muses.

For Ridley, it's Russell Crowe, as discussed (quite controversially) here. For his younger brother Tony, it's Denzel Washington. Denzel may make movies without Tony, but Tony never makes a movie without Denzel.

In fact, Unstoppable, releasing today, is the third straight Tony Scott movie in which Denzel Washington has appeared, fourth in the last five, and fifth overall.

So that's why Washington's career seems to have lost a bit of its luster recently.

Look, I actually think Unstoppable looks decent. It doesn't seem to go as heavy on the hypersaturated film stock that Scott has made his trademark, and it reminds me a little bit of Speed, which is always a good thing. Plus, Chris Pine is a genuine movie star in the making. Team him up with one of our greatest movie stars, and you've got the potential for a really fun movie.

It's just that a fun movie would be a real change of pace for Tony Scott.

Scott has become a big punching bag of mine in recent years, and it's really only because of two movies, only one of which stars Washington. In fact, of the five collaborations between Washington and Scott, including Unstoppable, I've seen only three, two of which I liked: Crimson Tide (big fan) and Deja Vu (surprisingly fun). I haven't seen The Taking of Pelham 1 2 3 -- I admit that I just assumed that it sucked and moved on -- so that just leaves one more movie I could be talking about:

Oh how I hate Man on Fire.

It was like Tony Scott wanted to find one script on which he could dump all his tendencies toward directorial excess, without regard for tastefulness or likability. Man on Fire is a nihilistic, hateful revenge movie full of sadistic characters, many of whom are killed even more sadistically.

But everyone likes a good Charles Bronson movie now and then. So it's the nausea-inducing filmmaking techniques that really drove Man on Fire over the edge into a morass of shit. Jittery camerawork, film stocks and color filters changing every three minutes, frenetic editing, doubling and tripling of movements, distortion of images, slow motion, whip pans, excessive sound effects ... every piece of garish showmanship you can think of to make a film look "hip" and "cutting edge" is in this movie. It just made me feel queasy.

But there's a film that commits these sins to an even greater extent, and it's also directed by Tony Scott, but does not feature Denzel:

Oh how I hate Domino.

Take all the visual bombast I described above and then double it, and you've got Domino. To add to the "hipness" quotient of this film, there are even choice bits of dialogue typed out on the screen and looped in the soundtrack, so they have the maximum opportunity to be extracted for quotation and entered into the cinematic lexicon, I suppose. Didn't happen. Domino is noisy and stupid, and it fetishizes violence as much as the worst offenders in that category.

So what does this have to do with the price of tea in China? Or with Unstoppable?

I guess not much. But any opportunity to diss Man on Fire and Domino is a good opportunity. It's my blog, so if I want to use the release of Unstoppable as a chance to bag on its director, I will.

Tony Scott has made some truly enduring films, such as Top Gun and True Romance. But today he is no better than a hack who occasionally scores a likable movie. Denzel Washington, one of the most popular stars in Hollywood, does not need to tarnish his reputation by continuing to appear in Scott's movies.

Er, unless they're like Crimson Tide and Deja Vu, in which case, never mind.

Absolute viewpoints ... they'll get you in the end.
Posted by Derek Armstrong at 1:53 AM

You really have a hate on for these Scotts my friend, although I'm not 100% sure I agree with your assessment of Top Gun as enduring because it suffers from such excesses too expect not so glaring in that you can never get a sense of where the jets are in relation to each other. It's kind of a headache.

I agree with you on Man on Fire and Domino although I really love Christopher Walken in the former (another brillant CW monologue for the books) and Tom Waits' desert scene in Domino is kind of brillant. Domino isn't helped by the fact it was written by Richard Kelly who can't seem to construct a complete idea to save his life. Put these two together and your left with what is essentially a feature length montage.

I will give Scott credit though, the moment one of his trailers come on, you know instantly that you're looking at a Tony Scott movie. That's worth something. Also Pelham didn't such all that much, especially if you bought Deja Vu. It loses the comedy aspect of the original and ramps up some action to unbelievable heights but it's pretty fun. I'm really looking forward to Unstoppable. I think I could probably watch about 5 hours of a train but destroying stuff in it's path.

I knew discussing the Scotts would prompt you to chime in!

I do generally think that Tony Scott is a one-trick pony. That said, I don't want to condemn his movies without a second thought, which is why I stated the potential I saw in Unstoppable several times.

I would like to be reminded of this Tom Waits desert scene in Domino, but I would not watch that movie again if you paid me. Okay, I guess it would depend on how much you paid me.

I was careful to refer to Top Gun as "enduring" rather than "good," because I don't know that I love that film. However, I think of it as "enduring" because it's one of those films that has assumed a special place in the zeitgeist. Most people are familiar with it, and I don't think you can say the same about Tony Scott films like Days of Thunder, The Fan and Spy Game. (Another Scott film I hate: The Fan. Blecch!)

I also agree with you on Richard Kelly with the obvious exception of Donnie Darko, which I think is a masterpiece.