Killing a baby dragon? Not cool. 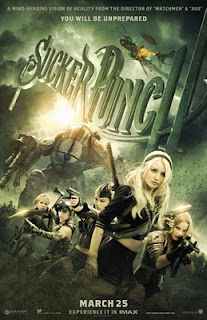 Despite ample critical evidence that I should think otherwise, I was with Sucker Punch for at least its first half.

Then they had to kill that baby dragon.

Not just kill it -- slit its throat while it was asleep. Execution style.

This act of cruelty is part of the scavenger hunt that makes up most of the plot in both the first and second layers of the movie's fantasy world. (It's a little like Inception in terms of constructing its fantasy world in layers, but most would say the comparison ends there.) Our heroes, a quintet of girls imprisoned in a squalid mental institution, have to assemble a number of practical, real-world items in order to attempt an escape.

In the deepest layer of the fantasy, where the girls play valkyrie versions of themselves, these items also appear in a fantasy incarnation. They need to steal a Zippo from a client (the first layer of the fantasy has them working in a seedy bordello) in order to create the fire they'll use as a diversion. In the deeper fantasy layer, the lighter is represented by two crystals they must strike together to make a spark.

Unfortunately, for reasons known only to director Zack Snyder (who also gets the screenplay and story credit), these crystals are lodged in the throat of a baby dragon. And the baby dragon ain't just going to cough them up, even if the girls ask nicely.

What's cruelest about this scene is that the baby dragon -- an innocent regardless of his/her behavior -- does nothing to deserve a quick yet brutal death. The girls simply sneak up on the baby dragon while he/she is asleep, taking him/her from behind and slicing a sword across his/her neck. For a moment you think that Babydoll (Emily Browning), the film's protagonist, is going to be unable to complete the task on moral grounds, and will show the same mercy she's shown several other incredibly foul characters during the course of the movie, who deserved that mercy a lot less.

To make the scene even more pathetic, the cute little dragon even lets out a cute little sleeping noise just moments before his/her untimely passing, which lets us know just how deeply and peacefully and obliviously he/she is sleeping. Talk about a sucker punch -- the definition of a sucker punch is to hit someone when they're not ready/expecting it. They should have called the movie Sucker Cut instead.

So when the mother dragon awakens, and gets pissed at the girls, and wants to burn them to a crisp, we're supposed to root for her to fail. After all, dragons are always evil -- even baby ones, apparently. But if I were a mother dragon and I had just discovered my baby's throat slit, I'd want to light the world on fire. So not only is the original act cruel, in a vacuum, it also has the narrative deficiency of causing the viewer to align with the supposed villain in this scenario.

Maybe it's just the parent in me speaking, but I thought this could have been handled so much differently, especially since the entire plot is episodic and therefore can be pretty much anything they want it to be. There were many ways Snyder could have had a showdown between the girls and a dragon; did the event precipitating it have to be the slitting of a baby dragon's throat?

And what was funny (not "ha ha funny") was that they took such pains elsewhere in the movie to make sure the violence was directed entirely at enemies that were a) clearly evil, and b) frequently already dead, such as the zombie Nazis in the second fantasy sequence.

So let me get this straight -- killing live Nazis is not okay. They have to be dead already. But killing a baby dragon is perfectly kosher. (Probably a bad choice of adjective when discussing Nazis.)

It's as if that moment marks the moment when the film's morals entirely fly out the window. What follows is a series of highly questionable activities that I won't get mired in discussing here.

However, I do have some

Other thoughts on Sucker Punch:

Shame on you, Warner Brothers, for trying to be original

There may have been reasons (one described above in detail) to shit on this movie, but if we do, we can't take the moral high ground and expect studios to continue to take this kind of risk when these are the results.

I've recently been discussing how it takes a particular filmmaker awhile to build up the kind of credibility that allows the studio to take a risk on their original pet projects. Christopher Nolan was the example being discussed; he only had the studio's blessing to make Inception because he'd already twice proven his success with a familiar property (Batman).

You can look at Snyder in a similar light. Snyder's movies have largely been successful, but look what they've been: a remake of one of the seminal zombie movies (Dawn of the Dead), an adaptation of a graphic novel (300), an adaptation of what comic book geeks consider their bible (Watchmen), and an adaptation of a somewhat popular kids book series (Legend of the Guardians: The Owls of Ga'Hoole). This last was something of a risk, and predictably it was the least successful. Until Sucker Punch came along and was an unmitigated commercial and critical failure.

I'm not saying you need to pretend you like Sucker Punch when you don't. Just understand what the repercussions of your dislike are, the next time you say Hollywood is lazy and cowardly.

I just saw Abbie Cornish in Limitless like two weeks ago -- she was a name I'd heard, but I'd yet to see one of her films. For some reason, I didn't notice in that film what I noticed in this film:

Consider the physical similarity. Mary is on the left and Abbie is on the right: 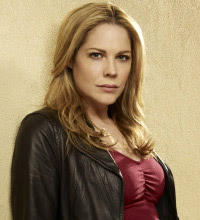 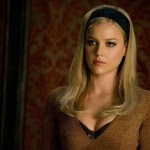 If you don't know who I'm talking about, you probably should. She's a name that's been around for awhile, although a household name she is not. I think I originally met her (so to speak) when she did such a great job playing Howard Stern's long-suffering wife in the surprisingly enjoyable Private Parts. She's also shown up in two other underrated films (High Heels and Low Lifes and Right at Your Door) as well as such less-interesting fare as K-PAX and 1408. Right now she stars in a TV show I haven't seen (but would see, just because of her) called In Plain Sight.

I'll admit it -- I find her physically attractive. But it goes deeper than that. I also find her incredibly sympathetic. Some actors just have that quality, while others do not. And she's got spunk.

In fact, I really wish I didn't have to dig so hard to find Mary McCormack movies you've probably seen. The woman should get more work.

Hopefully Abbie Cornish can take the baton and have the kind of career I would have liked McCormack to have. (I'm talking about McCormack as though she's over the hill, but she's only 42. Sadly, in Hollywood, it's only downhill from here for women of her age.)

You know what else Sucker Punch reminds me of?

But consider it. Both films involve an orphaned girl caught in a horrible real-world existence from which she needs to mentally escape. In both instances, the girl finds this escape in the form of an active fantasy life. Both girls have a wicked -- a very wicked -- stepfather. Actually, Browning's Babydoll has two stepfather figures -- her actual stepfather, and the owner of the bordello who fills that same role.

In both films, at least one opportunity to dispatch of this figure is passed up. In Pan's Labyrinth, the character played by Maribel Verdu passes up an easy opportunity to kill the evil general, played by Sergi Lopez -- to the great detriment of the protagonist. Here, Browning herself passes up opportunities to kill both her stepfather and the cook who tries to rape her friend -- I think it's another character (maybe Cornish's) who doesn't kill the evil bordello owner (Oscar Isaac) when she has the chance. All three of those possible killings would have made Babydoll's life a lot easier.

And in both films, the girl dies at the end. Well, Babydoll doesn't die -- but she takes a lobotomy for Cornish's character, and that's close enough.

Well, that was probably entirely too many words to write about Sucker Punch.
Posted by Derek Armstrong at 12:19 AM