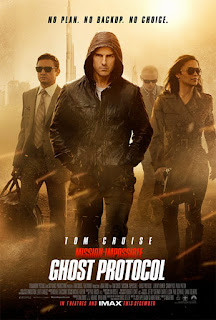 You know what a lot of actors can't do very well?

Lately I've been noticing it a lot. Scenes in movies or TV shows that are supposed to be tense, that feature the main characters running. Except most of the time, they look like they're more worried about tripping on a loose object and stumbling face first -- the kind of fall that would risk scratching up their money-makers. I can't believe the number of directors who let actors get away with these slack-faced, controlled trots, which are all the more ridiculous because you can't look intense while running cautiously.

But not Tom Cruise.

In fact, Tom Cruise running is one of the main reasons I look forward to a Tom Cruise movie. That guy runs like a bat out of hell. He runs like he's being chased by a pack of wolves that haven't eaten in two weeks. He runs like there's a finish line and he needs to blow past a hundred other runners before he can get there. He runs like he's running away from a bomb. (Which in movies, he usually is.)

If you don't believe me, just check it out. I'd hoped to find a single still that perfectly encapsulated the Tom Cruise Run. Fortunately, Youtube has got me covered. (Which also means that "Tom Cruise can run" is not a particularly original observation).

Even still this does not capture the quintessential Tom Cruise Run in my mind's eye.

Where other actors hesitate, Cruise commits. Where other actors demonstrate a me-first attitude, he puts the drama first. And you know it's not a double, because they usually shoot him head on. How else to capture that slightly crazed, slightly desperate, slightly shocked look in his eyes?

Anyway, it's one of the reasons I'm now looking forward to Mission: Impossible - Ghost Protocol. (Damn, that's too much punctuation for one title). Which opens wide today after raking in the dough while opening on just a couple hundred screens last Friday.

I mean, I knew Cruise could run and I knew he would run in Ghost Protocol. The difference is that I have seen a lot of bad running recently in movies and TV, so it has whetted my appetite for an actor who can actually do it effectively.

I'm also looking forward to it because the critical raves are in. Owen Gleiberman of Entertainment Weekly, one of the critics I read most, even put it in his top ten of the year. (At #10, but still.) And unlike such series as The Fast and the Furious, where Fast Five has gotten a lot of positive word of mouth, I'm actually caught up with the M:Is. So I can watch this one without wondering if I'm missing some of the story (he says while stifling a bit of laughter at his own ridiculous rules).

The problem is, The Girl With the Dragon Tattoo and The Adventures of Tintin also release today, and the list of movies I'd like to see before January 24th, when I close my 2011 list, is currently 40 titles long. (Exactly 40 -- I just checked on my blackberry.)

If I want to see all these movies, I'd better run.
Posted by Derek Armstrong at 7:06 PM

When I read the title I snapped immediately to Tom hauling ass with briefcase in The Firm. Great post, keep 'em coming!

Nice post! You're damn right, Cruise, like Will Smith, runs like he actually knows what he's doing. Smith actually was a track star in Philly, and his form is excellent. Tom, otoh, runs like he's scared and his adrenaline is maxing out.

Notable BA runners include Clooney (George, not Rosemary), who seems to have an awkward lurch. Similarly, I was laughing at Matt Damon in the second Bourn movie. He has this boxy movement that would really suck at generating any actual speed.

I've never thought about this, but you're right - it's part of Tom's appeal as an action lead.