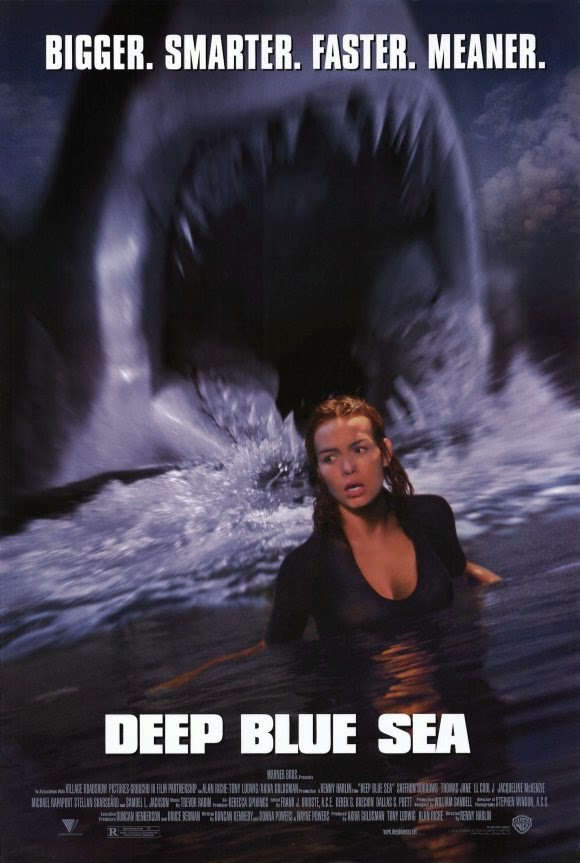 Hype is a funny thing.

Most of the time we talk about it ruining our experience of watching a movie because it causes us to expect a better movie than we actually ended up seeing. However, it can cut both ways. Sometimes, you're led to believe you're going to be seeing one of the most absurd howlers that has ever been filmed, and in the end, you just see a generically mediocre to bad film.

Such was the case with Deep Blue Sea, which I chose to be possibly the last film I see on my Movie Diet that ends Sunday (it completes my allotment of two for this week, in any case -- if my wife wants to watch something before Sunday night, I'm permitted to do so under my own self-imposed rules). In fact, so awful was I led to believe Deep Blue Sea would be, that I was kicking myself that I failed to get it onto the schedule in 2013, when I watched one "famous flop" per month.

Instead of being outrageously bad, though, Deep Blue Sea was mostly just the ordinary kind of bad. But not even really bad enough to get worked up about.

Not to be confused with the Terence Davies movie from 2011 that has a The at the beginning, Deep Blue Sea concerns the attempts by scientists to cultivate a cure for Alzheimer's disease inside the brains of genetically altered sharks. Because a shark's brain shows little to no degeneration over the shark's lifespan, scientists have posited that a shark's noodle could be the key to solving brain degeneration in humans, and have been testing on sharks on science's version of an oil rig -- a partly sunken laboratory off the American coast called Aquatica. Here three sharks are penned in a massive underwater cage while Dr. Susan McAlester (Saffron Burrows) and Jim Whitlock (Stellan Skarsgard) run periodic tests on their brains. But their funding is about to be cut by a skittish investor, Russell Franklin (Samuel L. Jackson), if they can't come up with some solid results soon. Franklin visits Aquatica to view the progress, right after shark wrangler Carter Blake (Thomas Jane) has reacquired one of the sharks that devised a method of escaping its confinement. As it turns out, Franklin's timing was very bad -- the sharks have become super-intelligent, and have both designs on killing their captors, and the means to do it.

The underlying assumption is that a person should find Deep Blue Sea ridiculous because of the ridiculous things the sharks do. Perhaps this is why I couldn't get on board laughing at the movie the way I wanted to. It's a very different thing to have an ordinary movie about sharks doing un-sharklike things, and a movie where the sharks' un-sharklike behavior is due to them acquiring advanced intelligence through scientific testing. I haven't seen any of the sequels to Jaws, but I understand that what makes them so goofy is that the shark does things like stalk its prey across vast bodies of water, possibly even making it from the Pacific to the Atlantic in order to satisfy its very specific blood lust. That, of course, is ridiculous. It's not ridiculous when the story sets it up that a bunch of testing has made the sharks both super-smart and super-angry. Then it's just one of the story's conceits, and on those grounds, we should be able to accept anything the shark does, short of actually sprouting legs and running on land.

And so none of the things the sharks do in this movie were really all that guffaw-worthy to me. On the contrary -- at some points it almost chilled me that a shark with a serial killer's mindset would be able to actually pursue its victims with murderous intent, the way we're asked to believe regular sharks in other shark movies can do.

Now, don't confuse this with me suggesting that Deep Blue Sea is good. It's not. Much of its staging betrays a true clumsiness, and the sharks themselves are so poorly animated that sometimes they appear to be moving at double speed, like in silent comedies. The characters are also broadly drawn types, but this is not so surprising in a frame story, especially a frame story that occurs within the disaster or horror genres.

In truth, much of Deep Blue Sea proceeds pretty much as you would expect it would. Various sealed chambers are impregnated by water, causing humans to run for a distant door to seal themselves away from the water again. Various distant parts of the compromised laboratory need to be reached against improbable odds. Various characters need to sacrifice themselves in various heroic ways, as the shark picks them off in bloody fashion. And it's pretty easy to predict which characters will emerge with their lives, based either on traditional Hollywood morality or on which characters have committed the most unforgivable sins against nature.

Just don't expect me to get worked up about how bad Deep Blue Sea is, even after remembering during the closing credits that it was directed by Renny Harlin. Because I just can't go there with you.

I suppose it wasn't only the hype that spoiled my ability to develop a "special dislike" for Deep Blue Sea, but also, the fact that I had already been told the surprise fashion in which one of the main characters is killed. Whoever told me about this character's death considered it the shining example of why the movie is so bad, and so from about the 30-minute mark on, I was just waiting for this death to assess how silly I thought it was. When it finally came, I had lost the ability to even put myself in the shoes of someone who was surprised by it. Like everything else in the movie, it was just dispiritingly mediocre.
Posted by Derek Armstrong at 8:42 AM