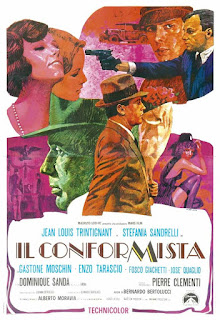 Yes, I'm about to do this. I'm about to write a post about Bernardo Bertolucci's The Conformist in which the primary observation I will make has to do with a piece of controversially translated dialogue.

Welcome to The Audient.

So the scene in question is when the handler of our main character, Marcello Clerici (Jean-Louis Trintignant), comes to Paris to make sure Marcello is not losing his nerve about carrying out his mission. The handler, Manganiello by name (and yes, I was constantly thinking of the guy who strips in Magic Mike), is talking to an unseen Marcello, but a passing Parisian woman thinks he is speaking to the birds. The line she speaks to him, as translated into English for the subtitles, is "He thinks the birds speak Italian! Damn!"

Except the last word she clearly says is "merde," which everyone knows is the French word for "shit."

Do they think we're that dumb?

The answer is no, no they don't. They just think we want the meaning of what she said translated, rather than the words themselves.

In reality, the English "Damn!" is closer to what that "Merde!" is trying to express than the English "Shit!"

"Shit!" is an expression of a surprise change in fortunes, usually negative. Something bad happens, you yell "Shit!"

"Damn!", on the other hand, is an expression of amazement over the audacity of a person's behavior. Someone does something audacious -- like speak to French birds in Italian -- you say "Damn!" Or, if you are a character on an urban sitcom, it's "Daaaa-yommm!"

It reminds me of this post, on translation vs. transliteration. The goal is ultimately to convey meaning, not convey linguistic precision.

Look, I'm sure you don't really give a damn, or give a shit. What you might really want to know is: What did I think of The Conformist?

Yeah, it's pretty much a masterpiece. The only reason I didn't give it a full five stars was that I spent a good deal of the middle portion disoriented within the plot. There were certain things that were occurring live that I thought were flashbacks, and vice versa. It all made sense by the end, but the experience of being uncertain threw me enough and lasted long enough that I ultimately thought it might have been handled a little bit more gracefully. Still, this is tour de force filmmaking with especially remarkable camerawork.

While watching it, a character on an urban sitcom might even say "Daaaa-yommm!"
Posted by Derek Armstrong at 8:14 AM