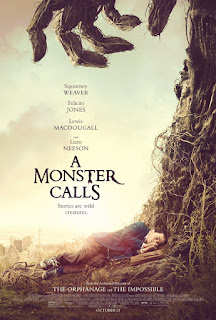 If you can believe it, there's still one more movie with a 2016 U.S. release date that has yet to come out in Australia. It doesn't even come out until next Thursday, the 27th, actually.

Fortunately, due to the magic of press screenings, you can already read my review here.

I'm not sure why J.A. Bayona's A Monster Calls had such a slow progression to the Australian cinemas, but perhaps they just wanted to wait until it was the dead of winter and the movie could not depress us any further. (It's actually not "depressing" in the pejorative sense that one would usually use if describing a movie; it just happens to be about sad things.)

I do have a bit of mixed emotions about reviewing a movie like this, if only because I've mentally moved on by late July and feel like I want to be spending time on movies that count toward my 2017 list. I see 2016 movies at home, but in the theater it feels a bit weird. (Even the private critics screening room where I saw it.)

Then again, I love hearing myself talk, so if someone wants me to talk about a movie that had even its wide release more than six months ago in the U.S., I'm your man.

And though U.S. readers will have likely had the option to rent this for a good four months, Australian readers are advised to check it out in the cinema. It's worth the big screen.
Posted by Derek Armstrong at 4:40 PM