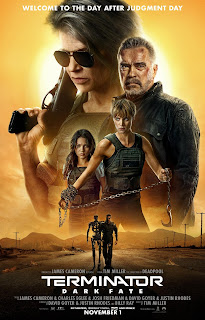 The cinematic landscape is littered with failed Terminator reboots.


Okay, there are only two. But if Terminator: Dark Fate does not do well, three could constitute a proper littering.

I can’t think of another series that reboots itself so frequently, that needs to reboot itself so frequently as a result of repeated failures. Spider-Man is an obvious answer, but in each case of Spider-Man rebooting, at least the initial reboot was a success. No Spider-Man series to date has had fewer than two films, and you don’t make a second film using the same actors unless the first one is a success, by whatever standards you measure that success.

I’m sure that each time Terminator has rebooted, they expected to make anywhere from two to five more movies in that timeline, but never have they been able to make a single one more.

At least with Terminator: Salvation – which, for the record, is the worst Terminator movie we’ve gotten – they tried to jump ahead into the future, Star Wars style. It was a clear continuation of the story that had been hinted at in the first three Terminator movies. I kind of think that’s the way to go. But it didn’t work. Boy, did it not work. A friend of mine and I still joke about the clumsiness of the “What are you???” scene. I won’t get into it now.

Now, if I’m not mistaken, Terminator: Dark Fate is also being billed as a true sequel to T2, and as proof has both Arnold Schwarzenegger and Linda Hamilton returning in front of the camera, and James Cameron behind it (as writer and producer, anyway). Even though any “true” sequel to T2 would know that Arnold Schwarzenegger was melted down and should not still be around, nor should he have whiskers on his face. (They’ll explain it in a satisfactory enough way I’m sure.)

Will this finally be the movie that gets it right? And if so, will it be just in time for the key performers to be way too old to keep making movies?

I’ve long since stopped trying to establish a reliable “use by” date for Schwarzenegger, and I kind of thought Hamilton’s had already passed, since I haven’t seen her in anything in ages. I guess I’ve just been looking in the wrong places, as she has approaching 20 credits in the past ten years. Point is, even at ages 63 and 72 they could probably be in three more Terminator movies each if that’s the way they want to go. And if not, they can try to make Mackenzie Davis the Rey of this series and launch off of her growing star power.

As cynical as I'm being about the history of these movies, though, I'm still as hopeful about the prospects for a new Terminator movie as I have ever been. Terminator 2: Judgment Day is still among my top 25 films of all time, and if a new movie can be even a third that good, it's worth showing up for.
Posted by Derek Armstrong at 9:15 AM