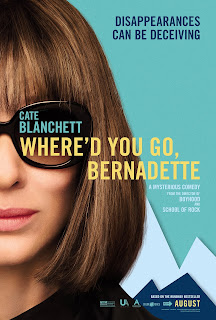 Two weeks could be the longest hiatus I've ever taken from this blog, though I'd have to go back and check on that. It's certainly the longest unexplained hiatus; I think there was a Christmas trip to the U.S. a couple years back that might have left you without a new post for longer than that, but at least I told you about it in advance. (I chuckle a little saying "left you without a post," as if I take any more than marginal measures to ensure my ramblings are for you, the reader, rather than just myself.)

I didn't die, you'll be glad to know.

I didn't go to Antarctica either, like the title character in the poster above (that's not a spoiler as they show it in the first few minutes of the movie, which was one of 15 I saw while I was gone, mostly on various flights). But as with that other long hiatus referenced above, I did go to the U.S., somewhat unexpectedly. I won't get into why. Just know that it was a family issue, but that everybody's okay. Something inevitable has arrived faster than we were expecting it to, but even within that context, everyone is okay, and better yet, happy.

I left the morning after my last post, which was exactly two weeks ago, and arrived back on Thursday, jet-lagged after three consecutive flights over a 24-hour period. I'm still fighting the jet lag, though last night's sleep was mostly a normal one.

I actually thought I might keep this blog updated while I was gone, as I began composing a post based on movies I watched on my first flight, in Microsoft Word on the plane since I had no internet access. If I'd finished that post, I suppose I would have posted it and possibly written others. But once I hit the ground, I had a lot to do, and typing up my free associations about movies did not seem like the most urgent use of my time. Plus, I didn't actually tell anyone on social media I was going on this trip, since it made sense to use all my available time for the purpose of my trip rather than seeing friends. Posting to my blog would have defeated that purpose, or at least given me excess guilt.

Instead of landing back here with a regular post, though, I figured I would give you a little grab bag of some of those thoughts I had while I was gone, in little chapter subheadings. I'll get back into the flow of regular writing over the coming week.

So without any further you know what ...

Having the time to take the time

On my August trip to Los Angeles, I saw Once Upon a Time in Hollywood, cramming it into a busy schedule and starting it too late at night to fully appreciate it. After that viewing I placed myself squarely in the "I do not like Tarantino's latest" camp, defending that stance with scattered thoughts about there being a lack of "Tarantino scenes" (clever set pieces with surprising payoffs) and about the film ending with an explosion of violence that could be interpreted as misogynistic.

But I suspected I hadn't really given the movie its best chance to succeed, and over time, these arguments lost some of their vigor. Seeing the movie among my first flight's options, I decided I'd spend the proper time with it this time. Not only did I like it much better, I understood the connections between certain scenes that had evaded me when I watched it too late that one night. Just as one example, the scene with Brad Pitt's character and Bruce Lee was an extended flashback, something I hadn't properly understood when I first saw it, which therefore threw off my understanding of the continuity of the scenes. As I said, I was too tired to watch this movie back in August.

I could probably go into detail, but as this post is a collection of multiple thoughts, I'll just report that I doubled my original two-star rating to four. And am looking forward to my eventual third viewing.

I didn't actually start the flight with Once Upon a Time in Hollywood, but rather, an episode of the Bill Hader-led HBO show Barry, which is also set in, and establishes a satirical perspective toward, Los Angeles. But it wasn't until my second movie, Stuber, was also set in LA -- and also tried to poke fun at the city's most risible traits -- that I realized I had a theme going. (I say "tried" because Stuber was awful, hands down the worst of the 15 I saw while I was gone.)

So to keep it going, I continued buttressing my various viewings with episodes of Barry (which had been my plan anyway) and made a hopeful choice of a third film on the docket, Yesterday. That's Danny Boyle's latest about a young musician who awakens from a head trauma in a world without the Beatles, and becomes famous by "writing" their songs into existence. (I never expected to be watching this movie on the plane, by the way; I missed it in the theater due to a busy viewing schedule at that time, but also because I thought it would be a good candidate to watch on video with my wife. When she turned her nose up at the suggestion a couple weeks back, I knew I was in the clear to watch it on my own.)

Sure enough, the largely British-set film does contain scenes in Los Angeles, and what's more, includes quite the parody of a Los Angeles type, in this case a record label executive played by Kate McKinnon, who lives in a fantastic beach house.

As I specifically allowed this flight to breathe -- doing some reading and other activities as well -- I didn't cram in a fourth viewing, so the entire flight consisted of LA-themed viewings. Which I thought was fun, even though this was my first trip to the U.S. where I didn't so much as leave the airport in Los Angeles on my way to the east coast.

A good get, gotten easily

Even though this trip was all business, I have to admit I had an eye toward catching a movie that had already been released in the U.S. but wouldn't be so before the end of the year in Australia, meaning I'd miss it for my year-end list. Could this time have been spent seeing friends? Shut up.

At least I reduced my guilt by catching this movie on my first full day in Boston, when my sleep was all screwed up and I would not have been a presentable social animal. And at least it was available at the movie theater in Burlington, the town right next to the one where I was staying, at the multiplex. Meaning I didn't have to drive in to an arthouse theater in Boston, and therefore take up an unjustifiable amount of my precious time in town, to see it.

What The Lighthouse -- which still does not have a release date in Australia that I can see -- was doing at the multiplexes is beyond me. I suppose Robert Eggers' previous film, The Witch, was enough of a crossover hit to have earned buzz and convinced some distributors of the commercial viability of its follow-up. But even that was a movie where much of the dialogue was hard to understand (I used the subtitles on my second viewing), so a follow-up about two lighthouse keepers, in black and white, with dialogue that's only marginally more intelligible, didn't seem like an automatic win. Who knows, maybe they just saw that it starred the former Edward Cullen and just rolled the dice. There were a decent number of people in my Tuesday night screening, in any case.

The movie has similar strengths and weaknesses to The Witch, ending in a similarly unsatisfying place for me. But I'm really glad I did indeed get it in before the end of the year.

One of my top contenders on the aforementioned year-end list is Bong Joon-ho's Parasite, and to shore up exactly how much I liked it, I thought a second viewing was in order before the end of the year. Only problem is, it may not get released to U.S. iTunes before then, so I didn't know the likeliest way for me to get my hands on it, even with an Australian release date back in June.

Qantas took care of that problem for me by having it among its list of movies. But in part because I was following that LA movie theme, I decided to hold my second Parasite viewing for my return trip.

Only problem? My return flight was only a Qantas code share, meaning I took the domestic cross country flight and subsequent LA to Sydney leg on American Airlines. Which had quite the good movie selection, just not Parasite.

I did have one more Qantas flight, though, which was the hour-long Sydney to Melbourne final leg of my trip. It seemed foolish to start this viewing, knowing there was almost zero chance I could finish it, but already on this return trip I had spent an unexpected hour on the ground before leaving Boston (which fortunately did not cause me to miss my transfer in LA). With a handful of well-placed little delays that are part and parcel to the airline industry, I might get in close to an entire viewing.

Which is exactly what happened. I started Parasite the moment I got to my seat, and since I was one of the first groups to board, this was nearly a half-hour before the flight actually took off. With another hour in the air and delays on the ground in Melbourne due to needing to be towed to align with the air bridge, plus with me seated near the back of the plane anyway, I saw the entirety of the film's climactic scene, leaving only the postscript portion of the film unwatched. It was enough to confirm that indeed, with two months to go before my ranking deadline, Parasite will factor in very seriously to the top of my year-end rankings.

Okay, there's a couple thousand words for my "starving" blog audience (ha). Back this week with shorter and more regular posts.
Posted by Derek Armstrong at 8:15 AM

Labels: once upon a time in hollywood, parasite, stuber, the lighthouse, where'd you go bernadette, yesterday

The illuminati is a secret society that strives to promote spiritual and moral values. It was founded under principles of love, justice, unity, peace, and relief. The illuminati bring together individuals of goodwill, irrespective of their differences and backgrounds, and ensure that these good men become better in the society. Do you wish to be a member of the illuminati and become rich, famous, powerful and excel in life? Were you will be giving $1100,000 as first benefit. Kindly contact me now or add me up whatsapp via +218-94-371-8064 Email. lorddavid2345@gmail.com