A genre unto himself 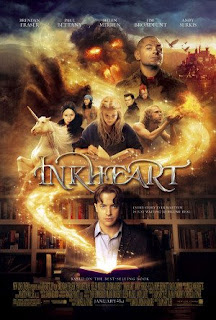 Even if his mongoloid eyes and alien good looks weren't front and center on the poster, I could still tell you who the star of Inkheart was:

That, my friends, is because Brendan Fraser has become his own genre.

10. Bedazzled (2000). The least Brendan Fraser-ish of Brendan Fraser's Brendan Fraser Period. He plays a regular guy who sells his soul to the devil and keeps getting transformed into different versions of himself as the devil messes with his mind. High concept scenario involving cartoonish hijinx? Check.

9. Dudley Do-Right (1999). Plays the Canadian mountie from the famous cartoon series. The fantasy elements appear to be underplayed, at least as far as a person who's never seen the movie can tell.

8. Monkeybone (2001). Another movie I have not seen. But if the animated monkey and the brightly colored crazy world it lives in are any indication, this is pretty Beetlejuice-y, and therefore, pretty Fraser.

6. George of the Jungle (1997). Exceptionally more Brendan Frasery than some of the other Brendan Fraser Movie on this list, because it's the only movie on the list to really acknowledge Fraser's simian characteristics and use them as an active plot point. (Note: See Honorable Mentions section for the other prominent example).

5. Looney Tunes: Back in Action (2003). Fraser has been cartoon characters and has acted alongside cartoon characters. This film seemed to bring all his prior interests together in one place. Another astute observation from the man who has not seen this film.

3. The Mummy Returns (2001). In this terrible sequel, Fraser gets to do what Mel Gibson does in the Lethal Weapon movies and what Bruce Willis does in the Die Hard movies -- deliver several dozen lines that can basically be summarized as "I been through this shit before." Very Brendan Fraser.

2. Journey to the Center of the Earth (2008). A remake of Jules Verne's famous middle-earth fantasy, featuring plenty of monsters, Fraser acting like another archeologist/geologist type, and 3-D! "Get me Brendan Fraser!"

1. The Mummy: Tomb of the Dragon Emperor (2008). That title alone is enough to take the prize of Ultimate Brendan Fraser Movie.

Honorable Mentions: Encino Man, Blast from the Past

Posted by Derek Armstrong at 7:06 PM

The National Treasure movies would have been a lot better if Bren Fras (I'm too lazy to type his whole name) had been in them instead of Forehead Cage.

The thing I like about the Fras (trying another nickname...good? No?) is that he actually looks like he's in on the joke and having fun, good movie or not.

I love this concept. How about top 10 non-Brendan Fraser movies featuring Brendan Fraser? At the top of my list would be Gods and Monsters. He wasn't quite on par with Sir What's His Name, but pretty damn good!