Just the reaction I'd hoped for 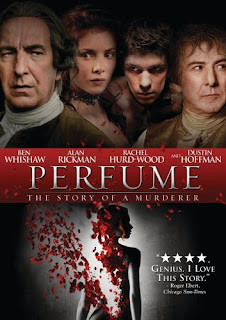 Even though recommending movies is one of my favorite things to do, it does sometimes cause some low-level anxiety.

Namely, if you end up steering the person wrong, your judgment may suffer in his/her eyes.

This is especially a problem for me, because I'm guilty of overselling movies I like. Talking about movies gets me so excited that I tend to exaggerate how good they are, or how bad other ones are. "Exaggerating" is not really the right word, because my feelings are genuine. It's just that I use such breathless terminology to describe them, I'm setting them up to fail.

It's also a problem for me because I want people to trust my recommendations. In fact, my work is predicated on that assumption.

And so it was that I was really pleased when I had my breathless terminology echoed on a recent loaner from my collection, Perfume: The Story of a Murderer.

First, a bit on the film. I believe this is the last new movie I chose to add to my collection, though there have been gift additions since then. This is significant, because I've been on a trend toward owning fewer movies, just for reasons of frugality. This one crossed that magic "need to own" threshold on the basis of its absolute cinematic uniqueness: It's a film about the sense of smell. I had never heard of such a thing.

The reason there haven't been more films made about smell is that it's hard to visualize the olfactory sense. Or so the conventional wisdom goes. In fact, Stanley Kubrick, who was once considered to direct an adaptation of Patrick Suskind's novel, Das Parfum, called it "unfilmable." He was just one of a dizzying array of directors who have been attached to this project, including Martin Scorsese, Julian Schnabel, Tim Burton, Milos Forman and Ridley Scott.

But Tom Tykwer didn't let that worry him. He used his unique narrative gifts to impart indelible images to the smells in the film, as well as paint a lush picture of 18th century France that's both appropriately grimy (the fish-strewn marketplaces) and appropriately opulent (the palatial mansions). The story's anti-hero is a gifted orphan who develops the world's most finely-tuned sniffer, and spends his life overwhelmed by scents, until it turns him into a murderer bent on cultivating the essence of woman as a perfume. It just plain works, and it's totally captivating. (The film also shows how perfume is made, in what I believe is another cinematic first).

A couple months ago, we had one of my wife's friends over for dinner -- he's my friend too, but I know him through my wife -- and since he's also a big film buff, I sent him on his way with Perfume. It was around this time that I also got another friend to take my copies of a second Tykwer film, Run Lola Run, and Alfonso Cuaron's Children of Men. I worried less about these two than I did Perfume, considering them both to be slam dunks, while Perfume got mixed reviews.

Time passed. I waited for feedback. Oh, I did other things in the meantime, but there was always a small percentage of my brain devoted to wondering when I'd hear back from these two guys on how they liked the movies.

This past Saturday night, at a friend's birthday drinks, I finally decided to ask the second friend about Run Lola Run and Children of Men. He had yet to watch either of them, but laughed while he said it -- as though I were trying to foist two turds off on him, and it would be a real chore to watch them. (To be fair, he hadn't requested these films -- he told me he hadn't seen them, so I brought them the next time we got together). What's worse is that since this guy and I have differed on several films in the past, he's got this running joke that my taste in movies is bad. For a guy who writes film reviews for a living, this is a shot to the heart, though I always laugh it off. In order to keep the joke going, he conveniently forgets the movies we've both loved, as well as those we've both hated. He just remembers when we differ.

I tried to "Oh come on" him -- I mean, we're talking about two of the best films of the last ten years (there -- more hyperbole for you). He grudgingly acknowledged that Run Lola Run was probably good, but said he'd heard mixed things about Children of Men. I immediately demanded to know the names of the people who told him this, and their addresses. Okay, I didn't, but I wanted to.

I wouldn't say this exchange really got me down. I mean, I do expect him to eventually watch them, and would honestly be surprised if he didn't enjoy them.

But it was still pretty well-timed when the other friend contacted my wife the next day to tell her how much he liked Perfume. I didn't read what he actually wrote or hear what he actually said (I can't remember what medium he used to contact her), but she conveyed me the message that he "loved it." This put a little smile on my face.

Then he repeated the praise directly to me yesterday. He posted the following on my facebook wall:

"dude - thank you for Perfume. I loved it. Very original and provocative. Only lame thing? Dustin Hoffman's superbad Italian accent."

Yeah, he's got a point there. Dustin Hoffman doesn't belong in a period piece, especially one set in France. And he does take you out of the movie -- just a little. But as you can see from his comment, it doesn't crucially damage a person's overall perspective on the film. (Plus, he's in it for 20 minutes or less).

This may be a lot of words to devote to a simple everyday social transaction -- a person liking or not liking a recommendation -- but hey, welcome to The Audient. More than anything, I hope this post will encourage my readers to check out Perfume, one of the great treasures I've discovered in the last couple years, especially if you like art direction and production design. You might even say I'm "recommending it."

Thereby putting my cinematic reputation at risk once again ...
Posted by Derek Armstrong at 2:43 AM

Very well. I will see 'Perfume'. But beware - I adored the novel, and think the story is inherently more suited to that medium.

On a related note, I have simply stopped recommending things to people, tired of being held responsible for their disappointment. Of course, my tastes tend to the weird and bizarre, so I shouldn't be complaining...

I haven't read the book, though I think I'd like to. I also know you are capable of separating films from their source material, so I hope you will at least appreciate it on its own terms. If nothing else you should like the art direction.

That's sad that you've lost your will to recommend movies. If they don't like it, that's probably their shortcoming, not yours.