But first a few safety announcements 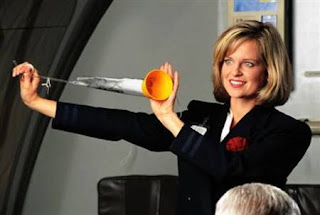 We finally saw The Hangover on Saturday night. Having written two posts about it prior to seeing it, I don't have anything particularly interesting to say after the fact. Other than that I liked it. Not every movie inspires further comment.

What I did want to talk about were a couple unusual things that preceded the movie, in increasing order of their funniness/peculiarity.

1) We sat down nearly 15 minutes before 7:35, when the show was scheduled to start. Yet I was momentarily worried that my watch had died, because the commercials were already playing. I had never seen this before, but I guess there's a certain logic to it. If they have to show commercials anyway, why not show them when people are actually getting seated? Those who got there early will have something more involved to distract them than brainlessly easy trivia questions ("What three-digit number is another way to refer to James Bond?"), and the commercials themselves would not need to further push back the start of the movie. Yet it ended up being kind of the worst of both worlds. The commercials were fairly loud, contributing to the already-stressful hubbub of a popular movie on Saturday night, and there were certainly more of them than there would have been under normal circumstances, just making it feel even more interminable until we actually got a taste of what we'd paid for. And then the movie still didn't start until around 7:51 anyway. Hmm.

2) But this was the really weird one. Another thing they wedged in there -- I think it was before the trailers, but I can't be sure -- was a totally straight-faced set of instructions about how to leave the theater in the event of an emergency. We're used to seeing (and ignoring) stuff like this on airplanes, but in movie theaters? It seems like it should be self-explanatory. Yet this terminally square announcement went painstakingly through the locations of the exits in the theater, as if the glowing disembodied word EXIT at the four corners of the room was not easy enough to see. Then it followed with the fairly obvious (though I may be giving the average American too much credit) advisement to move away from the theater once you've exited. I guess how obvious it is would depend on what kind of emergency we were having. If it were a fire, everyone would be gone, but a fight? I guess you might sneak back for a look. Still, the fact that no other theater I've visited has ever given me a minute-long demonstration on the emergency procedures tells me something.
Posted by Derek Armstrong at 11:37 AM