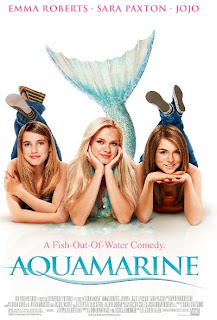 If you're a villain in a movie made for teenage girls, there's no deader giveaway that you're a bitch than the fact that you drive.

Oh, there are plenty of other indicators. You'll make snide comments about the appearance and/or popularity level of the good teenage girls, our heroes. You'll sneer a lot. You'll do mean, back-stabby things. And you'll have two slightly less mean sidekicks, cruelly tittering alongside you, though don't be surprised if at least one of them turns on you by the end of the movie, overcome by the inherent goodness of the heroes.

But there's a better than average chance you'll be doing some, if not all, of these things while in your car, preferably a convertible.

I've seen two movies in the last week -- both to review them -- that featured mean teenage girls who drive cars, while the heroes either ride bikes or get rides from their parents. I saw Sleepover last Saturday night, and Aquamarine this morning with my fruit & yogurt-flavored Special K. Coincidentally, both films feature the actress Sara Paxton, though she's the bitchy villain in the former, the delightful mermaid in the latter.

Both films feature a trio of evil jerks who ride around in cars, while the disadvantaged heroes -- "underdogs" is a better word -- are, by notable contrast, on foot. And fairly humiliated about that fact.

It's one of the only times in film we see the person in a position of power featured lower in the frame than the person in a position of weakness. Anyone who's taken a Film 101 class knows one of the oldest tricks in the book: to position the weak character lower in the frame, and the powerful character higher in the frame. If an actual, physical height difference isn't possible, given the landscape restrictions, then you shoot the powerful person from a low angle, looking up, and the weaker person from a high angle, looking down.

Except convertibles are a game changer in this respect. They're like moving thrones, meant to indicate the regality of the people sitting in them. And they always do that quite well. If there were any doubt about this, Aquamarine's villain, Cecilia (Arielle Kebbel), has a vanity license plate that reads PRINCESS. The logic of these movies is, even though all the characters (and everyone in the audience) wishes they had a car, only rich, absentee parents who confuse spoiling their children with loving them would actually buy their teenage daughter a convertible.

It's also part of the age-old philosophy that the hero must have fewer resources than the villain -- in other words, must prevail despite his/her underdog status. This is actually one of the single most important governing principles in all of cinema. You see it in everything from sports movies (small team of misfits must defeat big, well-oiled machine) to fantasy movies (tiny Hobbit must defeat giant, all-seeing eye) to superhero movies (Iron Man must defeat even bigger, evil Iron Man). Why not girls on bikes defeating girls in cars?

Of course, this is nothing new, nor is it limited to girl-on-girl action. Just think about the epic struggle between Marty McFly on his skateboard and Biff in his convertible full of goons. There, the convertible ended up filled with horse manure -- the ultimate repudiation of both Biff and his goons, and the car itself.

One other quick note about Aquamarine, which I actually found pretty delightful: It was the second movie featuring mermaids that I saw in 24 hours. That's got to be some kind of record. My wife and I watched a terrible indie called Full Grown Men last night, featuring 30 Rock's Judah Friedlander (who was by far its best part), and mermaids made a brief appearance in that film as well, albeit that they were women dressed in mermaid costumes. We seemed to have been destined to watch a mermaid movie last night, as my wife rejected Aquamarine as too teenyboppery -- I would have agreed, having just seen the very teenyboppery Sleepover, but ultimately found it quite sweet. Then the mermaids showed up in Full Grown Men anyway.

Enjoy your Saturday -- whether it involves driving a car or not. And if it does involve driving a car, watch out for people on bikes or on foot. They'll get you in the end, especially if you condescend to them or insult their popularity.
Posted by Derek Armstrong at 4:19 AM