Just a bit of Taylor 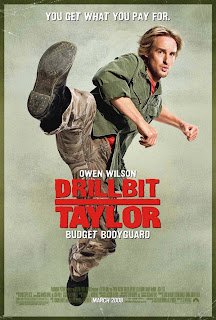 It's only 53 minutes into the post-Blockbuster era, and I already have a complaint with Netflix.

It's not an insurmountable complaint, to be sure. But I did think the timing was funny.

I added Drillbit Taylor, a movie I will be reviewing, to my Netflix Instant Queue a couple days ago, and noticed that it was only available for instant viewing until 9/15.

The Drillbit Taylor incident told me otherwise. However, I was prepared to live with that. And to take advantage of this closing availability window, I started watching Drillbit Taylor yesterday after work. When I succumbed to a nap, I told myself I'd finish it either Tuesday night, if I had to be awake weird hours for baby duty, or at worst Wednesday after work, before it was whisked out of virtual existence.

As it turns out, the weird hours of baby duty did indeed kick in -- and even though the baby is now sleeping in the other room, I'm still wired. So I thought I'd finish the half I had remaining.

Only, Netflix has a weird definition of what "available until 9/15" means. See, they cheated me out of one day. When I tried to resume from where I left off, Netflix told me this title was not available for instant viewing. The title appeared on the screen, the Resume Playing option was still active, yet there was no movie to be found. At least when OnDemand takes something away from you, it lets you watch it for the entire first 23 hours, 59 minutes and 59 seconds of the last day of its availability. Netflix, on the other hand, pulled the plug as soon as the clock struck midnight on the expiration date.

I also can't help but notice the contrast with Blockbuster, who, even after I ended my relationship with them, told me I could continue watching the three videos I had out for a whole month more, before I would be charged for them. September 15th was also the supposed expiration date there.

Don't make me come over there, Netflix.
Posted by Derek Armstrong at 5:53 PM