The exact price of schlock 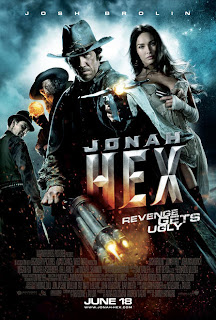 One of the reasons I enjoy renting movies from Redbox is because I know exactly how much I'm paying to watch bad movies.

With other plans, like a Netflix or Blockbuster plan, the cost may be nebulous. Depending on your rental patterns and how quickly you turn around the discs you receive in the mail, it's probably not a whole lot. The ability to stream online may cut down the cost further. In most cases, the watching of a single movie would be considerably less than the $1.10 (with tax) they charge for a night's rental at Redbox.

But there's something about knowing I paid only $1.10 to see Jonah Hex that makes it a pretty good commentary on what it was worth.

It's a small enough amount of money that you would describe it as a charge in name only -- we routinely spend $1.10 on a ton of things every day without praying on it to make sure it's the right course of action. That's one of the reasons the Redbox model works so well -- few of its target customers would ever consider it a burden to pay a dollar to rent a movie, and having the kiosks in grocery stores makes it a great impulse purchase. The question doesn't become "Can I afford this rental?" but rather "Is there anything I want to see right now?" or "Do I have time to watch this before it's due back?"

See, if I'd gotten Jonah Hex from the library or borrowed it from a friend, it wouldn't be the same thing. Zero doesn't count as a value, because we receive free rentals of all kinds of movies that we end up loving. Paying $1.10 is a much more perfect way to insult a movie.

I'm thinking of a metaphor related to my dad's perspective on helping friends fix their cars, which was not my dad's profession, just a hobby he loved. When he once told me that he'd rather do the work for free than take a nominal fee, I didn't really understand where he was coming from. He explained that the two options should either be to do it for free, as a friendly gesture that might be returned one day, or get paid the same or similar hourly rate that he'd get paid to be at work. It was almost always the former because the latter would be a) prohibitively expensive and b) somewhat icky in terms of an actual financial transaction. His time was too valuable to be paid a small amount of money. If he did three hours of car work for someone and they paid him $25, it would seem more of an insult than doing it for free.

Paying Redbox prices for Jonah Hex is like paying my dad $25 for three hours of mechanic work.

And perhaps this is why I've come to think of Redbox as my source for all movies schlocky, potentially schlocky, and otherwise unfit to present to respectable company. Now that I no longer have my Blockbuster account, I don't have any backdoor methods to rent movies I don't want my wife to necessarily know I'm renting. Not that I'm actually ashamed of watching Jonah Hex, but what if my wife thinks that I'm renting it because I've got a stiffy for Megan Fox? Yeah, she's an attractive girl -- albeit incapable of playing a sympathetic human being -- but I was in it to see if they could do more with the steampunk sensibilities that inspired the production design than Wild Wild West did with the same ingredients. (They did, but not a lot more, and given how awful Wild Wild West was, that's really not saying much.)

I can rent things through Netflix, but my wife and I both have access to that account, she was its original owner, and she receives the email notifications of new rentals. So that's about as public as it gets.

So when I want to see something and I don't really want to have an actual or implied conversation with my wife about why I'm seeing it -- even though it's all in my head that she would actually judge me about it -- Redbox is my place to go. Which means a bunch of schlock gets rented from Redbox, for $1.10 apiece.

What kind of schlock? Well, let's review my Redbox rental history to find out.

Law Abiding Citizen (4/3/10) - This was my first Redbox rental, and I actually wrote about it here. Pretty schlocky alright -- violent, amoral and preposterous. Although not entirely un-fun.

The Informant! (4/4/10) - Not schlock, but not as good as I wanted it to be either. This rental was made the very next night after Law Abiding Citizen, not out of a prurient desire to see something schlocky, but out of excitement with the new rental method I'd just discovered. Besides, this was early, and I didn't yet know how I planned to use Redbox going forward.

Pandorum (5/31/10) - Murder-and-mayhem-in-space schlock. Actually, after watching Outland recently, I wanted to write an entire post about sci-fi movies that involve murder and mayhem in space, but I didn't strike while the iron was hot, so now I'll wait for the next one.

Youth in Revolt (6/21/10) - Not schlock, but this was a free rental as part of some Redbox promotion, so I was happy to tell my wife about it, removing it from the realm of a back-room transaction. She had the option of watching it but chose not to.

The Joneses (9/25/10) - Schlocky, if not out-and-out schlock. A social satire, but I had to admit that my interest stemmed somewhat from my attraction to Amber Heard, so that made this qualify as the aforementioned type of secret and shameful rental. My wife ended up watching it with me when she failed to make it to a baby shower she had been planning to attend. I'd been planning to watch it during the baby shower, but it wasn't like I was going to return it unwatched just because I didn't get to execute my original plan.

The Losers (10/2/10) - Comic book schlock, which actually ended up being witty, visually dazzling and fun. Not great, but definitely better than I expected it to be. I watched it while my wife was at The Social Network, and I was home with baby.

Repo Men (10/24/10) - You'll notice a pattern here -- watched this while my wife was at a bridal shower. However, there was also a football game on I was interested in, and an inconsolable baby to deal with, so the viewing had to continue after she got home. More future sci-fi schlock, this time located on Earth.

Jonah Hex (11/28/10) - The very definition of schlock. I kept urging it to be good. Did it have its moments? I'm sure it did. Did those moments stick with me or have any lingering impact on me whatsoever? Nope.

So only eight rentals in nearly eight months. Surely I must want to watch something secret and tawdry more often than that, right?

But that's where the $1.10 price comes in -- you only get the movie for one night. So when you rent it, you have to be pretty sure you'll have the chance to watch it that night. Before 9 p.m. on the day after you rent it, anyway. When you're juggling babies and trying to deemphasize to your wife the fact that you're watching the movie, this can be difficult. (Incidentally, she found out about all but maybe two of the above titles, and obviously, she didn't care one way or the other. In each case it ended up being true that she didn't really want to see the movie in question, though Pandorum has now made its way onto our Netflix instant queue, even though I told her it's not very good.)

But I may already have my next one lined up. My wife is heeding my advice and seeing Tangled tomorrow night. I may rent The A-Team from Redbox, to watch during that same time period.

Do I care if my wife knows I saw The A-Team? No.

And I'm sure it will be worth every penny of that dollar and ten cents.
Posted by Derek Armstrong at 2:43 AM

You're a smarter man than I as I paid $9 to see "Jonah Hex", mainly because I think Josh Brolin should be a star and I wanted to show my support. But still....I regret that $9. I mean, Megan Fox is hot and all but that's only because she's actually a CGI creation. Eventually the truth will come out.

There's got to be something more fun that the A-Team, which isn't schlock, it's pure garbage. You got it right with the Losers. Quite while you're ahead.

Interesting concept with the story of your dad. Never really thought of it that way.

I will say this though, give the Informant another try. It's actually one of the most stylized movies I've ever seen but most people didn't notice it because film style today means you have to be a decorator like Burton or Gilliam. Definatly worth a second chance.

Law Abiding Citizen sure is guilty fun isn't it? It's not to often that you can find entertaining garbage in modern movies anymore. as I wrote so long ago, everything these days is polished and lifeless. I guess that's why I valued my experince with Legion: it reminded me of what makes good bad movies so enjoyably bad. Although, on that note, any more with machine guns strapped to the side of a horse is worth at least a peak in my books.

I was actually planning to go see it in the theater, but it was gone from everywhere by the new Friday release date two weeks later. If it had hung on for a week longer I would have been right there with you, except I probably would have spent more like $12. And yes, that is totally the truth behind Megan Fox.

It looks like I will be saved the A-Team, as I made a faulty assumption about its availability -- it's not actually coming out until December 14th, which is odd because many of the movies released in August have already reached DVD.

I watched The Informant! pretty late at night, and just remembered how slow I thought it was. But at least Soderbergh always commits to his production design (see The Good German, or don't).

I think you had more fun with Law Abiding Citizen than I did, but at least it tried to be something interesting, for which I give it points.

Oh, and by my comment I didn't mean to indicate I thought The A-Team was released in August -- it was released in June. I just meant that movies released two months later are already on DVD, but for some reason this is not.

Ya, probably has something to do with how compared to most of the summer movies, it made some money so the release will be closer to Christmas so the DVD can make even more.