Sleeping all these years 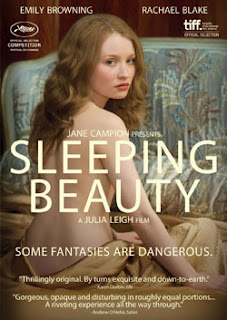 I keep a running list of all the movies I've ever seen.

This you know. I've told you before.

What I may not have told you is that there's almost no way it's complete. I like to think of it as complete, but the truth is, it was initially compiled out of a comprehensive guide available at the local video store in my hometown, over 20 years ago. I've made it as close to complete as possible over the years by adding any titles I think of that are missing, and I've been successful to the extent that I go years between realizing certain titles aren't on there.

But it still happens. As in last night, when I finally realized that Walt Disney's Sleeping Beauty was not on my list of movies seen. 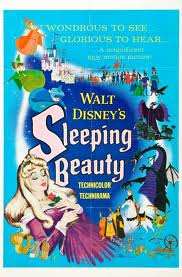 And all it took was seeing an updated softcore erotica version of the story for me to make the connection.

Actually, Julia Leigh's 2011 film Sleeping Beauty really only borrows the title of the Disney film/fairytale, as it involves a "beauty" (Emily Browning) who willfully consumes a drug that will put her into a deep sleep for several hours, during which time clients at a brothel can do anything they want to her, short of actual intercourse. So, don't take your kids to this one.

But as I was going to list it in my lists, I made a mental note to add the year 2011 in parenthesis after the movie to distinguish it from the 1959 Disney version. Oops. Nope, not on there.

So then I had to ask myself: "Did I actually see the original Sleeping Beauty?"

I had to think about it. I've long had a system for distinguishing the three animated movies from the early years of Disney that involved princesses. Snow White and the Seven Dwarfs is the classic; Sleeping Beauty is okay but sort of forgettable (which is why I can never remember if I've seen it); and Cinderella is the one I haven't seen.

Okay, so it looks like at some key moment in the history of compiling this list, I confused Sleeping Beauty and Cinderella. It's probably because I know Cinderella is more classic and I'm a lot more familiar with the story, even if I haven't seen the Disney version. So I feel like I should have seen it over Sleeping Beauty. I haven't seen it ... right?

There's an easy way to correct this, and it's the same correction method I used last year when I wasn't sure I'd seen Ingmar Bergman's Wild Strawberries: Just see the movie again. But do I really want to waste a viewing of Cinderella now, when I could wait two or three years and watch it with my son? I've actually been stockpiling a list of animated movies I haven't seen, intending to delay my first viewing until I can watch them with my son. If he then wants to watch that same movie another 30 times, that'll be one fewer total viewing for me to get sick of it.

So maybe the Cinderella issue will go unresolved for now, but after deliberating about it, I can now say pretty certainly that I did see Sleeping Beauty. It was during one of the theatrical re-releases that were common when I was a child, where I also saw the likes of Pinocchio, Snow White, Dumbo and Bambi. I'd venture to say that I saw those four before I saw Sleeping Beauty, and perhaps that's why I now remember for sure that I saw it -- I remember thinking that Beauty was "lesser Disney." Yep, there I was, an eight-year-old kid, contemplating the greaters and the lessers in Disney's catalogue.

As for this new Sleeping Beauty, well, it's not titillating, if that's what you were hoping for. It has some interesting moments, some shocking moments, but overall it's too opaque to make as much of an impression as it clearly wants to. The three things it does have going for it are the beautiful photography, uninterrupted takes that usually run the length of the whole scene, and a performance by Browning that must have been really difficult to pull off.

And unlike its predecessor, there's no chance I'll forget whether or not I saw it.
Posted by Derek Armstrong at 1:16 AM

2) Regardless of when you watch it, if you don't already have a copy of Cinderella in your library, you might wanna snag the forthcoming Blu-ray/DVD combo pack. By the time it comes back out in the next cycle, your son may feel he's too old for a movie like that. (I have to buy it because my wife took the DVD.)

Incidentally, of the three princess Disney movies I think Sleeping Beauty is easily the best of the three (as much as for the three fairies as for the excellent Maleficent, a villain to top all villains).

The photography and the production design are the best things about the new Sleeping Beauty (and I still wonder precisely what the ending means) but it does stick with you and I do like it, "like" probably being the wrong word considering how uncomfortable it makes me feel.

I just realized I neglected to responded to your comments. Bad Vance. Even though it's 2.5 months later, respond I will.

You won't be titillated. (I suggest that titillation may be your motivation, because I just recently saw Room in Rome on your recommendation. Will discuss at another time.) However, it's worth seeing. Oh, and I can't be bullied by Disney. They are like George Lucas in the way they withhold the things we want from us.

Well then, I definitely need to re-familiarize myself with Disney's SB. Your take on the new Sleeping Beauty is similar to mine. It looks gorgeous and everything about the filmmaking is a home run. What precisely it is trying to do, especially the ending, remains unclear.

Thanks for the comments!

You've hit on a brilliant new way to keep older posts active: respond months later, so that we have to re-read the original post and our comments just to know what you're talking about! :P

Speaking of not being sure about things, I don't recall actually recommending Room in Rome! I've cited it as a movie I wish I'd written, and I was entirely captivated by it, etc., but I don't recall pitching it. Regardless, I definitely look forward to that discussion!

I should clarify: You didn't actually recommend Room in Rome to me, but you listed it among your choices for late-night viewings, and I had never heard of it so I put it on my Netflix queue. It came up sooner than I expected it to (in that same late-night setting). I really enjoyed the way the director (the same who directed the similarly erotic Sex and Lucia) wove the internet into the movie -- the characters help tell their own story by using the internet to sort of explain/prove their existence in the world. I liked that touch and what it said about our contemporary digital tendencies. However, after watching it, I eagerly awaited the day that we had streamed ten other titles since, so it would no longer appear among our Recently Watched titles. Don't want my wife to think I watch movies in which naked women go at it for 90 minutes after she goes to sleep each night. As of last night it is sitting at #10. :-)

Ha! Yeah, I can appreciate how it may look. For me, it wasn't even about the (admittedly hot) sex. It was about the intensity and bravery of the performances and the escalation of the characters' intimacy. The revelation of deeply personal experiences, feelings, fears, longings, shame...I didn't want their night to end.