Not so Brave after all? 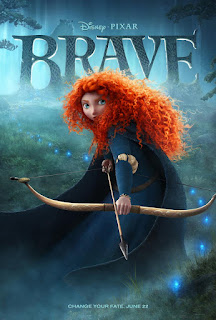 That sound you hear is a sigh of relief from hardcore Pixar fans upon the release of Brave.

True to its name, the film represents Pixar's return to its risk-taking ways of old. After two straight sequels -- one that was well received (Toy Story 3) and one that wasn't (Cars 2) -- the company is finally returning to something brand new, something with uncertain merchandising potential featuring characters we've never met before. The return is temporary, as the sequel to Monsters Inc. (called Monsters University) is due out in June of 2013. (I just read that it is technically a prequel.)

But I'm kind of wondering if Pixar isn't relying on our sense of familiarity for this one, too.

Oh, there are surface similarities to How to Train Your Dragon, but that's not what I'm talking about. It's actually a bit more shrewd than that.

Remember a little movie called The Hunger Games that came out in March?

Yeah, that movie also featured a tough female protagonist who's handy with a bow and arrow.

Don't think this didn't cross their minds over at Pixar.

The actual release date of the Hunger Games movie would have been largely serendipitous. But back when they announced what was then called The Bear and the Bow in April of 2008, they had to know that The Hunger Games would be made into a movie, and that by June of 2012, it would already be either a big hit, or a highly anticipated release sometime in the near future.

Ha. No. See, this is what happens when you start writing a blog post before fully researching the thing you're writing about.

Suzanne Collins' first Hunger Games book was not published until September of 2008 -- nearly six months after the movie that would become Brave was announced.

So The Hunger Games and Brave are actually just another case of that phenomenon we see so often in Hollywood -- the convergence of similar ideas that are ready to hit the multiplexes within months of each other. Often times, one of those ideas is a direct rip-off of the other, even if it makes it to theaters first. In this case, though, it seems like just a coincidence.

Of course, it's not like The Hunger Games and Brave are similar outside of the fact that a young girl wields a bow and arrow in both. It's not like these are two competing movies about the life of runner Steve Prefontaine.

So why did I make you read a whole post in which my conclusion ultimately contradicted my original thesis?

Hey, I'm lucky if I get the time (or have the ideas) to write anything these days. If I've got actual content up on the page, I'm publishing it.

Here's hoping you love Brave ... and that I start finding the time to post more often.
Posted by Derek Armstrong at 12:15 AM