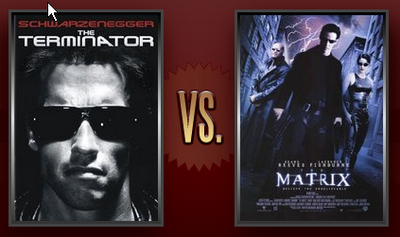 Catching the middle two Terminator movies in the past month has reminded me of a realization I had maybe a decade ago:

The Terminator and The Matrix are essentially variations on the same story.

I'm not saying I was some kind of genius for thinking this up, but I did think it up on my own.

So my question is: Which version of the story do you like better?

I'm making a distinction here between this question and the question "Which movies do you like better?" Because it would be fairly easy to argue that the Terminator series holds a distinct advantage over the Matrix series. There are two indisputably great Terminator movies, whereas there is only one indisputably great Matrix movie. (Granted, there's also one more movie in the Terminator series than in the Matrix series.) Also, the Terminator movies have spanned three decades, while all three Matrix movies were contained to the period of 1999 to 2003.

So it's actually more of a question of: Which interpretation of machines rising up to enslave humanity better stimulates that sweet spot in your imagination?

As with many things, this is probably a case of which one you encountered first. I actually saw Terminator 2 before I saw The Terminator, so T2 is my favorite Terminator movie. Hard to say whether I'd reverse those two honors if I'd seen them in order, but T2 blew me away. I saw The Matrix next, then it probably would have been The Matrix Reloaded followed by T3 and then The Matrix Revolutions, as all three of those movies hit theaters in 2003. Bringing up the rear -- both chronologically and in terms of quality -- was Terminator: Salvation in 2009.

So yeah, I'm ultimately a Terminator guy, but it's not as easy a decision as you might think. Probably my peak fascination with either of these series came about the time when I saw The Animatrix, a straight-to-video series of short films in different animation styles that was released about a month after The Matrix Reloaded. At the time, I was still on a high following Reloaded, a high that was unpolluted by the third movie in the series, or by the unflattering reconsideration of the second movie that was prompted by the third. When I saw The Matrix Reloaded, I was enthralled by the way it expanded on what we'd seen in The Matrix, even if it did climb up its own arsehole a little bit by the climax. So when a series of shorts that delved further into the logic of the Matrix universe came out a few weeks later, it engaged me right at the height of my philosophical wrestling with what I'd seen.

Conversely, the spin-offs of the Terminator series have held no similar fascination for me. I tried watching The Sarah Connor Chronicles on Fox, but it just didn't do it for me. In fact, I can't even remember if I watched more than one episode.

I think it may ultimately come down to the greater immediacy of the Terminator movies, the greater sense of impending tragedy. In three of the four movies, the apocalypse has yet to happen, and all energies are focused on trying to stop it. (Though I still don't know why the machines didn't just send a terminator back to the 19th century to kill John Connor's great great great grandmother. She would never see it coming.) Whereas in The Matrix, what's happened has already happened, and we actually know very little about it (though one of the Animatrix shorts goes into that, which is part of what made the shorts so fascinating to me).

Plus there's the fact that most of the world is not already dead in The Matrix. Practically speaking, they're dead, as they are being used as batteries to power the machines. But in their own consciousness, these people are alive, and in some cases, living a pretty damn good life. Not only that, but their circumstances seem to be reversible. Even if, upon a successful human rebellion, they were to be unleashed into a world that is as decimated as the world in the Terminator movies, at least humanity would have the numbers to rebuild and turn the real world back into a version of their idealized, anesthetized reality more quickly. The world view of The Terminator is more ballsy for its sheer bleakness. Even if the humans do overthrow the machines, there will be only, what, 10,000 of them? 20,000 of them? to repopulate the entire planet.

If I were to rank the seven movies, it holds up the slight advantage held by the Terminator movies. My rankings would go:

The only two I might flip-flop would be T3 and Reloaded. I certainly liked Reloaded more when I saw it than I liked T3. But I've now seen T3 three times, and have yet to revisit Reloaded. That tells me something. (Or wait, did I? I'll have to consult my records.)

I guess this ended up being a discussion of both the movies themselves and the universes they create, as might be expected. On the one hand, there's something more philosophical about The Matrix, even with the time travel aspect introduced into The Terminator. On the other, The Terminator is a lot cleaner, conceptually, and never spirals off into self-defeating existential rabbit holes.

Both have a lot of kick-ass action scenes.

So how do you come down on the topic?
Posted by Derek Armstrong at 1:44 AM

Labels: the matrix, the terminator